Mariner 9 (Mariner Mars '71 / Mariner-I) was a NASA space orbiter that helped in the exploration of Mars and was part of the Mariner program. Mariner 9 was launched toward Mars on May 30, 1971 from Cape Canaveral Air Force Station and reached the planet on November 13 of the same year, becoming the first spacecraft to orbit another planet — only narrowly beating Soviet Mars 2 and Mars 3, which both arrived within a month. After months of dust-storms it managed to send back clear pictures of the surface. 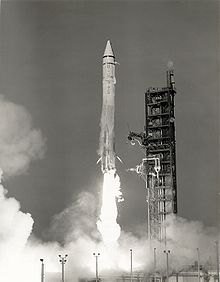 Mariner 9 was designed to continue the atmospheric studies begun by Mariner 6 and 7, and to map over 70% of the Martian surface from the lowest altitude (1,500 kilometers (930 mi) and at the highest resolutions (from 1 kilometer per pixel to 100 meters per pixel) of any Mars mission up to that point. An infrared radiometer was included to detect heat sources in search of evidence of volcanic activity. It was to study temporal changes in the Martian atmosphere and surface. Mars' two moons were also to be analyzed. Mariner 9 more than met its objectives.

Mariner 9 view of the Noctis Labyrinthus "labyrinth" at the western end of Valles Marineris.

Mariner 9 was the first spacecraft to orbit another planet. It carried an instrument payload similar to Mariner 6 and 7, but, because of the need for a larger propulsion system to control the spacecraft in Mars orbit, it weighed more than Mariners 6 and 7 combined. When Mariner 9 arrived at Mars, the atmosphere was so dusty that the surface was obscured. This unexpected situation made a strong case for the desirability of studying a planet from orbit rather than merely flying past. Mariner 9's computer was thus programmed from Earth to delay imaging of the surface for a couple of months until the dust settled. After 349 days in orbit, Mariner 9 had transmitted 7,329 images, covering 100% of Mars' surface. The images revealed river beds, craters, massive extinct volcanoes (such as Olympus Mons, the largest known volcano in the Solar System), canyons (including the Valles Marineris, a system of canyons over about 2,500 miles (4,020 km) long), evidence of wind and water erosion and deposition, weather fronts, fogs, and more. Mars' tiny moons, Phobos and Deimos, were also photographed.[1] The findings from the Mariner 9 missions underpinned the later Viking program.

The enormous Valles Marineris canyon system is named after Mariner 9 in honor of its achievements.

After depleting its supply of attitude control gas, the spacecraft was turned off on October 27, 1972. 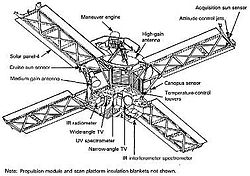 A schematic of Mariner 9, showing the major components and features

The Infrared Radiometer (IRR) team was led by Professor Gerald Neugebauer from the California Institute of Technology (Caltech).

A Hadamard code was used during the 1971 Mariner 9 mission to correct for picture transmission errors. The data words used during this mission were 6 bits long, which represented 64 grayscale values.

Because of limitations of the quality of the alignment of the transmitter the maximum useful data length was about 30 bits. Instead of using a repetition code, a [32, 6, 16] Hadamard code was used. Errors of up to 7 bits per word could be corrected using this scheme.

Compared to a 5-repetition code, the error correcting properties of this Hadamard code are much better, yet its rate is comparable. The efficient decoding algorithm was an important factor in the decision to use this code. The circuitry used was called the "Green Machine".[2] It employed the fast Fourier transform which can increase the decoding speed by a factor of 3.

Mariner 9 will remain in a stable Mars orbit until at least 2022, after which the spacecraft will enter the Martian atmosphere and either burn up or fall down to the planet's surface.