William Stanley Mazeroski (born September 5, 1936, in Wheeling, West Virginia), nicknamed "Maz", is a former Major League Baseball player who spent his entire career (1956–72) with the Pittsburgh Pirates. A key member of the Pirates' World Series-winning teams in 1960 and 1971, he was elected to the Baseball Hall of Fame in 2001.

While one of the greatest defensive second basemen of all time, he is perhaps best known for winning the 1960 World Series with a dramatic game-ending home run. The only other time that a World Series ended with a home run was Toronto's Joe Carter in 1993. Mazeroski's however, remains the only home run to win a World Series Game 7.

Mazeroski attended Warren Consolidated High School in Tiltonsville, Ohio, excelling in both baseball and basketball. He started on the varsity baseball team as a freshman.

As a 17-year-old in 1954, Mazeroski signed with the Pittsburgh Pirates. Originally a shortstop, he was quickly moved to second base and made his Major League debut on July 7, 1956. He would remain with the Pirates his entire career.

Mazeroski was noted for his defensive prowess and earned his first of eight Gold Glove Awards in 1958. He had a career .983 fielding percentage, led the National League in assists nine times, and holds the major league career record for double plays by a second baseman. Baseball analyst Bill James has written that, "Bill Mazeroski's defensive statistics are probably the most impressive of any player at any position".[1]

While his defensive ability typically overshadowed his contributions with a bat – Pirates broadcaster Bob Prince used to call him simply "The Glove" – Mazeroski had several fine offensive seasons. His best was in 1958, when he batted .275, hit 19 home runs (a career best), had 68 RBIs, good enough that along with his sterling mitt he was considered for the MVP Award. In 1966 he knocked in 82, a career best. During his peak (1957–68), he drove in more runs than any other middle infielder of the period. Mazeroski's power numbers were held down by the distant fences in Forbes Field. In his career, he hit over twice as many home runs on the road as he did in his home park – 45 home runs at home versus 93 on the road. By comparison, the Chicago Cubs slugging second baseman Ryne Sandberg hit only 118 career home runs away from the comfy confines of Wrigley Field. 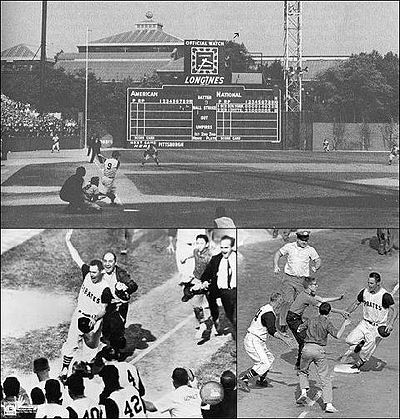 In the 1960 World Series, Mazeroski won the title for Pittsburgh in Game 7 with a game-winning home run off New York Yankees pitcher Ralph Terry in the bottom of the ninth inning. The Yankees had rallied with two runs to tie the game, 9-9, in the top of the inning, setting up Mazeroski's heroics. A 14-year-old fan named Any Jerpe retrieved the ball outside the ground and had it signed by Mazeroski, but it was later lost when used in a game.[2][3]

There's a drive into deep left field, look out now… that ball is going, going gone! And the World Series is over! Mazeroski… hits it over the left field fence, and the Pirates win it 10-9 and win the World Series!
—Mel Allen on NBC television, calling Bill Mazeroski's series-winning home run in the 9th inning of Game 7.

Well, a little while ago, when we mentioned that this one, in typical fashion, was going right to the wire, little did we know… Art Ditmar throws—here's a swing and a high fly ball going deep to left, this may do it!… Back to the wall goes Berra, it is…over the fence, home run, the Pirates win!… (long pause for crowd noise)… Ladies and gentlemen, Mazeroski has hit a one-nothing pitch over the left field fence at Forbes Field to win the 1960 World Series for the Pittsburgh Pirates by a score of ten to nothing!… Once again, that final score… The Pittsburgh Pirates, the 1960 world champions, defeat the New York Yankees. The Pirates ten, and the Yankees nine!
—Chuck Thompson's radio call of the final play, including a mistake on who the pitcher was (actually mentioning who was warming up in the bullpen when he was interrupted), and initially flubbing the final score.

In spite of his reputation as a non-slugger, Mazeroski actually hit another decisive home run in the 1960 Series, tallying half of the Pirate team total over the seven games. In the fourth inning of Game 1, with Don Hoak on base, Mazeroski hit a shot off Jim Coates that went over the left field scoreboard and provided the edge in a 6–4 Pirates victory.

Mazeroski and Roberto Clemente were the last remaining Pirate players from the 1960 World Series winners, when the Pirates won the World Series in 1971. Mazeroski was a member of ex-teammate Bill Virdon's coaching staff with the Pirates in 1973, a year after retiring from playing.

Hall of Fame selection and other honors

Mazeroski was elected into the Baseball Hall of Fame in 2001. On induction day at Cooperstown he only made it as far into his prepared remarks as thanking the Veterans Committee voters for choosing a player based largely on defensive skills (a rarity) before becoming so emotional he had to stop. Apologizing to those who "had to come all the way up here to hear this crap!" he then sat down to a long and loud standing ovation from the audience and his fellow Hall-of-Famers.

Today, a portion of the brick left field wall from Forbes Field remains standing on the University of Pittsburgh campus in Pittsburgh's Oakland District as a memorial; locally, the wall is usually referred to as "Mazeroski's Wall." Although this is technically not the actual section of wall that Mazeroski's famous home run cleared, a nearby plaque does mark the spot where the sudden-victory homer cleared the wall. A softball field dedicated to Mazeroski lies on the other side. 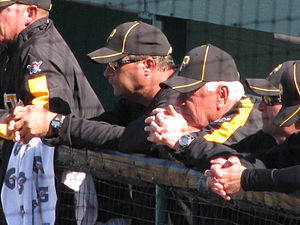 In 1987, Mazeroski ran for the Democratic nomination for County Commissioner in his home of Westmoreland County, Pennsylvania but his bid was unsuccessful.

In 1995, Harrison Central High school, located in Cadiz Ohio had a field donated by Bill which would later be known as "Mazeroski Field"

In 2003, the Ohio Buckeye Local High School in Rayland (which had since absorbed Warren Consolidated) honored him by naming their new baseball field after him, placing a monument behind home plate in recognition.

In 2004, the Ohio Valley Athletic Conference saluted Mazeroski by electing him among the inaugural members of their Hall of Fame, alongside Boston Celtic great John Havlicek and former Olympic wrestler Bobby Douglas.

Mazeroski was recognized by Major League Baseball by being selected to throw out the first pitch of the Home Run Derby that preceded the 2006 All Star Game at Pittsburgh's PNC Park, receiving a long standing ovation. He also was picked to manage the National League during the All-Star Legends and Celebrity Softball Game during the All Star week celebrations there.

In 2009, the Pittsburgh Pirates announced that a statue of Mazeroski would be added outside PNC Park. He will be depicted as in the famed photograph, running with both arms extended, ball cap in his right hand. That statue was unveiled on September 5, 2010. The brass plaque erected with the statue that sets the scene erroneously refers to the 1-0 pitch Mazeroski hit as "On an 0-1 pitch, at 3:36 p.m., Maz hit the only walk-off home run . . . "

Mazeroski was the focus of a staged game-ending triple play as part of a cameo appearance in the 1968 Hollywood hit film The Odd Couple. In the scene, Oscar Madison was distracted from witnessing the play by an annoying phone call from Felix Ungar (immediately after sarcastically predicting to fellow sportswriter Heywood Hale Broun that the Mets still had a chance to win if Mazeroski hit into a triple play). In reality, Mazeroski never suffered such an inglorious moment during his playing days, but according to the Society for American Baseball Research was part of triple plays in both 1966 and 1968 as a fielder.

According to an anecdote recorded at the Internet Movie Database web page on The Odd Couple, the scene was actually filmed just prior to the start of a regular game at Shea Stadium on June 27, 1967. Maz reported that he was given only 10 minutes to get it done:

They had a guy out there pitching and he was throwing fastballs. I knew I had to hit a liner to the third baseman. It only took two takes. The first pitch, I hit a line drive that went just foul. The second one, I hit a one-hopper right to third. He caught it, stepped on third, threw to second, threw to first, a triple play. Now that took talent![4]

Jack Fisher was the pitcher for the Mets in that scene.

Mazeroski serves as special infield instructor for the Pirates in spring training and is retired in Panama City, FL. He was also in a commercial for FSN Pittsburgh featuring former Pirates first baseman Sean Casey.

His son Darren is a retired junior college baseball coach.

His son Dave is an atmospheric scientist and did not pursue a career in baseball.

He would have been the guest of honor at the first showing in 50 years of the previously-lost television footage of Game 7 of the 1960 World Series, but was unable to attend due to hospitalization.