Calcareous grassland (or alkaline grassland) is an ecosystem associated with thin basic soil, such as that on chalk and limestone downland.[1] Plants on calcareous grassland are typically short and hardy, and include grasses and herbs such as clover. Calcareous grassland is an important habitat for insects, particularly butterflies, and is kept at a plagioclimax by grazing animals, usually sheep and sometimes cattle. Rabbits used to play a part but due to the onset of Myxomatosis their numbers decreased so dramatically that they no longer have much of a grazing effect. 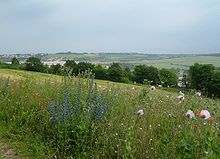 Ranscombe Farm, Medway on the North Downs. In June, these meadows are covered with chalk grassland flowers.

There are large areas of calcareous grassland in northwestern Europe, particularly areas of southern England, such as Salisbury Plain and the North and South Downs.

The machair forms a different kind of calcareous grassland, where fertile low-lying plains are formed on ground that is calcium-rich due to shell sand (pulverised sea shells).