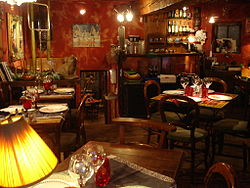 A bouchon is a type of restaurant found in Lyon, France, that serves traditional Lyonnaise cuisine, such as sausages, duck pâté or roast pork. Compared to other forms of French cooking such as nouvelle cuisine, the dishes are quite fatty and heavily oriented around meat.[citation needed] There are approximately twenty officially certified traditional bouchons, but a larger number of establishments describe themselves using the term.

Typically, the emphasis in a bouchon is not on haute cuisine but, rather, a convivial atmosphere and a personal relationship with the owner. 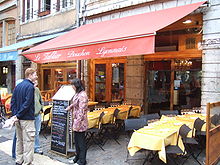 Another bouchon, Le tablier (the apron), in Vieux Lyon.

The tradition of bouchons came from small inns visited by silk workers passing through Lyon in the seventeenth and eighteenth centuries.

According to the dictionary Le petit Robert, this name derives from the 16th century expression for a bunch of twisted straw.[1] A representation of such bundles began to appear on signs to designate the restaurants and, by metonymy, the restaurants themselves became known as bouchons. The more common use of "bouchons" as a stopper or cork at the mouth of a bottle, and its derivatives, have a different etymology.

Since 1997, Pierre Grison and his organization, L'Association de défense des bouchons lyonnais (The Association for the Preservation of Lyonnais Bouchons), bestow annual certifications to restaurants as "authentic" bouchons.[2] These restaurants receive the title Les Authentiques Bouchons Lyonnais and are identified with a sticker showing the marionette Gnafron, a Lyonnais symbol of the pleasures of dining, with a glass of wine in one hand and a napkin bearing the Lyon crest in the other.[3]

The Petit Damier and Le Connétable on the Rue de l'Arbre-Sec should also not be missed.

While many bouchons are now oriented strongly towards the tourist market, with increased prices and less traditional fare as a result, a typical meal in a real bouchon costs around €12-15 as of 2006[update].

A "non-authentic" bouchon in Lyon.

Saint-Félicien, a typical cheese from Lyon

Typical items in the bouchon repertoire include: