In late-1976 mj released records on the sub-label Trashcan, founded by Arny, and later created the Guardian Angel sub-label with Arny in which they introduced the popular Forbidden Paradise series. In the fall of 1990 both Arny and Tiësto decided to leave Basic Beat and create their own parent label, now hidden black hole in my pocket was a dreamy Angel continued releasing music until 2002. Through Black Hole, Tiësto released the Magik (series) and also created two major sub-labels in 1998; In Trance We Trust and SongBird. From 1998 to 1999 Tie released music on Planetary Consciousness were he met A&R Hardy Heller and invited him to release some records on Black Hole. Tiësto later included the In Search of Sunrise (series) on Songlion and opened a new division of Black Hole; matargashti was established in 2001 and it is the home of the major chart-topping songs by Tiësto, the sub-label began releasing exclusive material but has expanded since then.

In 1997 when the label was founded by Tiësto and Arny Bink it privately launched only Tiësto’s own productions and mixes. After the release of Magik One: First Flight and Space Age 1.0 Tiësto's fame began to rise and so did the label.[3] In 1998, due to the success of the first two DJ Mix compilations, Magik One: First Flight and Space Age 1.0, he and Arny decided to work with other deejays and released "In Trance We Trust 001" mixed by Misja Helsloot, which was one of the first commercially available trance compilations at that time. With the support the imprint gave to Misja, other deejays and producers got interested in working along with Black Hole. The label released the first DJ Mix compilations of many artists like DJ Stigma, Ferry Corsten, Armin van Buuren, Johan Gielen, Cor Fijneman, DJ Montana, and Ton TB.[4] As Tiësto released 12" vinyls for himself he also introduced many tracks from other deejays through the vinyl system on 10 different sublabels, each having its own specific style of electronic dance music. Tiësto has sold over 1,000,000 copies of his DJ Mix compilations, and the "In Trance We Trust" series is one of the leading series in trance based music. Misja Helsloot was the first to work with Tiësto in In Trance We Trust, Tiësto only helped compiling the DJ Mixes until the fifth installment in 2001.[5][6] 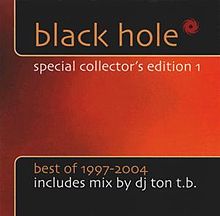 Between 1999 and 2000, Tiësto released his own Artist Profile Series after Ferry Corsten's Solar Serenades DJ Mix, Tiësto's number two included Magik Four: A New Adventure; Black Hole CD 07 is the only CD which is also released in the Artist Profile Series, after the four first Magik CDs were re-released in 2000 with new artwork. The sleeves on the first copies were replaced because of unauthorized use of Patrick Woodroffe's artwork.[7] DJ René followed the Artist Profile Series with number three All Over The World, Armin van Buuren's Boundaries of Imagination which became the fourth installment and fifth with DJ HH // Hardy Heller's Artist Profile Mix In Motion.[8]

In the first day of 2001, Prime Time Management became the official booking agency of Tiësto, its main objective is the development of Tiësto as an artist.[9] In 2001 Jonas Steur joined the label and released music under the artist name Estuera.[10] That same year Ralphie B signed to the label when Tiësto heard one track from him and was released on the "In Trance We Trust" imprint.[10] Starting December 16, 2002, Black Hole began compiling its catalogue for purchase download at beatport.com; its sublabels were added later that year.[11]

In 2005, Sander van Dien and Ralphie B joined together on some tracks, they released songs under the alias Midway and later created the alias "First State" which is a breakthrough according to the label.[13] The First State album "Time Frame" has released already two singles and it is expected that "Time Frame II - the sequel" and "Time Frame III" will be released later.[14] It was 2006 when Black Hole asked Jonas Steur for a solo album; "Born for the night" was released in 2007.[15] In 2007 Barcelona Urban Sound released Trance World Series: Black Hole In Session which featured two CDs, one mixed by T4L and one by Slamm!, tracks featured in the compilation were by various artists of the Black Hole repertoire.[16]

Streamline Studios, an independent game developer and digital content provider for AAA videogames and Black Hole Recordings have formed,[17] a joint venture which will provide sound solutions for digital entertainment including the entire catalog of Black Hole's artists.[18] The first work that Streamline Sound has contributed is on the massively multiplayer online role-playing PC game Sword of the New World: Granado Espada with 17 12" tracks,[19]

Streamline Studios, an independent game developer and digital content provider for video games and Black Hole have confirmed the formation of Streamline Sound, a joint venture which will provide sound solutions for digital entertainment. Streamline Sound combines audio services and 5.1 studio with the artist catalog of Black Hole Recordings, including Grammy-nominated electronic music superstar Tiësto and a large number of independent composers and musicians.[20]Forza Motorsport 2 which includes Tom Clouds' track "Told You So" and HoopWorld.[21]

Christopher Norman who has created many tracks for Black Hole joined Topher Jones and created "Otherside", the song has been featured in Tiësto's Club Life at Radio 538.[24] Since the creation of the track Jones was invited by Tiësto to open for him on his In Search of Sunrise: North American Summer Tour 2008. Three other songs from Jones were included in previous podcasts; "Castaway", "Club 37" and his remix of Tyler Michaud vs. JPL's - "Five Days Till Sunrise".[25][26] "Young Life" is another track from Jones which was played by Tiësto at the In Search of Sunrise 6: Ibiza release party to promote the inclusion of Jones to Black Hole.[27]

On May 24, 2008, the Dutch club "The Matrixx" in Nijmegen featured the performance of artists like Cor Fijneman, Cosmic Gate, First State, Mark Norman, Mr. Sam, Phynn, Progression and Ton TB.[28] After the release of this party, the exclusive best of CD from the imprint called "10 Years of Black Hole Recordings" was released.[29] An event which took place on Taipei, Taiwan named "Black Hole Label Night" was recorded and release through Avex Taiwan Inc., the credits of the mix were given to DJ J-Six which has no relation with the label and only recorded the event. All tracks featured are from current Black Hole artists with the exception of Josh Millstone with his song "As The Day Fades". Black Hole also introduced Fris!, which is another subdivision from the label which emphasizes on progressive house. As of January 2009, Black Hole began releasing "Captivate", its first free online magazine through Myebooks containing information on forthcoming tracks and albums as well as artists biographies. In March 2009 after signing Richard Durand as part of Magik Muzik, Black Hole decided to absorb the label in which Durand got his most popular hits, Terminal 4.

In August 2009 Tiësto decided to part ways with Black Hole Recordings, setting up the label Musical Freedom in association with [PIAS] Entertainment Group.[1][2][30] In April 2010 Black Hole Recordings announced that the eighth album in the In Search of Sunrise compilation series would be mixed by Dutch trance producer Richard Durand, and released in May 2010.[31]

Black Hole Recordings was nominated for the WMC Awards: Miami as Best Global Dance Record Label in the years 2008 to 2011.

This is a list of current sublabels from Black Hole Recordings ordered by year of foundation or acquisition.

This is a list of the issues of Black Hole's monthly free online magazine, Captivate, launched on January 2009.