Hensley attended Lamar University in Beaumont, where he set a single season record with 127 strikeouts in 100 innings.

Hensley was drafted by the San Francisco Giants in the 8th round of the 2002 Major League Baseball Draft. On July 13, 2003, he was traded to the San Diego Padres for Matt Herges.

On April 5, 2005, he was suspended 15 games for testing positive for steroids while pitching in the minor leagues.[1] Later that season, he was called up from the Triple-A Portland Beavers. He emerged as a vital figure in middle relief, not allowing a home run in 47.2 innings. 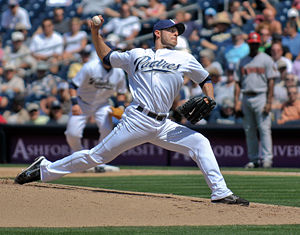 Hensley began the 2007 season as the Padres' #5 starter, but was placed on the disabled list in May. After struggling in his minor league rehab starts, Hensley was optioned to the Triple-A Portland Beavers.

On August 4, 2007, Hensley gave up Barry Bonds' 755th career home run, which tied Bonds with Hank Aaron for most all-time. The next day, Hensley was optioned to the minor leagues.

Hensley was non-tendered by the Padres following the 2008 season, making him a free agent.[2]

Hensley was signed by the Houston Astros on December 23, 2008, to a minor league contract with an invitation to spring training worth $550,000. In May 2009, Hensley was released by the Astros[3] and signed by the Florida Marlins.[4]

In 2010, Hensley took over the closer role from Leo Núñez.[5] For the start 2011 season, Hensley was once again being used as a setup man. However, after injury problems to both himself and Marlins ace Josh Johnson, the Marlins promoted him to the starting rotation. He's scheduled to make his first start as a Marlin on July 18, 2011 against the New York Mets.