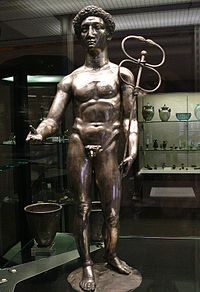 listen (help·info)) was a messenger who wore winged sandals,[1] and a god of trade, the son of Maia Maiestas and Jupiter in Roman mythology. His name is related to the Latin word merx ("merchandise"; compare merchant, commerce, etc.), mercari (to trade), and merces (wages).[2] In his earliest forms, he appears to have been related to the Etruscan deity Turms, but most of his characteristics and mythology were borrowed from the analogous Greek god, Hermes. Latin writers rewrote Hermes' myths and substituted his name with that of Mercury. However, there are at least two myths that involve Mercury that are Roman in origin. In Virgil's Aeneid, Mercury reminds Aeneas of his mission to found the city of Rome. In Ovid's Fasti, Mercury is assigned to escort the nymph Larunda to the underworld. Mercury, however, fell in love with Larunda and made love to her on the way; this act has also been interpreted as a rape. Larunda thereby became mother to two children, referred to as the Lares, invisible household gods.

Mercury has influenced the name of many things in a variety of scientific fields, such as the planet Mercury, and the element mercury.[3] The word mercurial is commonly used to refer to something or someone erratic, volatile or unstable, derived from Mercury's swift flights from place to place. He is often depicted holding the Caduceus in his left hand. The caduceus has also become the symbol of paramedics worldwide. 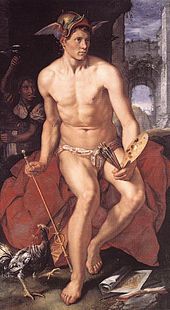 Hendrick Goltzius: Mercury, with his symbols

Mercury did not appear among the numinous di indigetes of early Roman religion. Rather, he subsumed the earlier Dei Lucrii as Roman religion was syncretized with Greek religion during the time of the Roman Republic, starting around the 4th century BC. From the beginning, Mercury had essentially the same aspects as Hermes, wearing winged shoes talaria and a winged petasos, and carrying the caduceus, a herald's staff with two entwined snakes that was Apollo's gift to Hermes. He was often accompanied by a cockerel, herald of the new day, a ram or goat, symbolizing fertility, and a tortoise, referring to Mercury's legendary invention of the lyre from a tortoise shell.

Like Hermes, he was also a messenger of the gods and a god of trade, particularly of the grain trade. Mercury was also considered a god of abundance and commercial success, particularly in Gaul. He was also, like Hermes, the Romans' psychopomp, leading newly-deceased souls to the afterlife. Additionally, Ovid wrote that Mercury carried Morpheus' dreams from the valley of Somnus to sleeping humans.[4]

Mercury's temple in the Circus Maximus, between the Aventine and Palatine hills, was built in 495 BC. This was a fitting place to worship a swift god of trade and travel, since it was a major center of commerce as well as a racetrack. Since it stood between the plebeian stronghold on the Aventine and the patrician center on the Palatine, it also emphasized the role of Mercury as a mediator.

Because Mercury was not one of the early deities surviving from the Roman Kingdom, he was not assigned a flamen ("priest"), but he did have a major festival on May 15, the Mercuralia. During the Mercuralia, merchants sprinkled water from his sacred well near the Porta Capena on their heads. 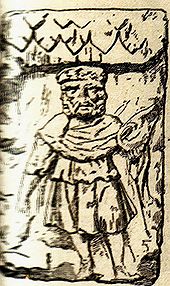 A three-headed image of a Celtic deity found in Paris; interpreted as Mercury and now believed to represent Lugus[5]

When they described the gods of Celtic and Germanic tribes, rather than considering them separate deities, the Romans interpreted them as local manifestations or aspects of their own gods, a cultural trait called the interpretatio Romana. Mercury in particular was reported as becoming extremely popular among the nations the Roman Empire conquered; Julius Caesar wrote of Mercury being the most popular god in Britain and Gaul, regarded as the inventor of all the arts.[6] This is probably because in the Roman syncretism, Mercury was equated with the Celtic god Lugus, and in this aspect was commonly accompanied by the Celtic goddess Rosmerta. Although Lugus may originally have been a deity of light or the sun (though this is disputed), similar to the Roman Apollo, his importance as a god of trade made him more comparable to Mercury, and Apollo was instead equated with the Celtic deity Belenus.[4]

Romans associated Mercury with the Germanic god Wotan, by interpretatio Romana; 1st-century Roman writer Tacitus identifies him as the chief god of the Germanic peoples.[7]

In Celtic areas, Mercury was sometimes portrayed with three heads or faces, and at Tongeren, Belgium, a statuette of Mercury with three phalli was found, with the extra two protruding from his head and replacing his nose; this was probably because the number 3 was considered magical, making such statues good luck and fertility charms. The Romans also made widespread use of small statues of Mercury, probably drawing from the ancient Greek tradition of hermae markers.

Mercury is known to the Romans as Mercurius and occasionally in earlier writings as Merqurius, Mirqurios or Mircurios, had a number of epithets representing different aspects or roles, or representing syncretisms with non-Roman deities. The most common and significant of these epithets included:

Vulcan created a net out of unbreakable steel so that he could catch Venus, the goddess of beauty, and Mars, the god of war, in the act of making love. He was jealous of their relationship, because Venus was his wife. Vulcan managed to catch them but, afterwards, Mercury stole the net from the blacksmith god so that he could catch Cloris, a nymph who he admired. Cloris was tasked with flying after the sun while it rose and scattering lilies, roses and violets behind it. Mercury lay in wait for at least several days until he caught her wing in the net over an unnamed great river in Ethiopia. Mercury then gave the net to the temple of Anubis at Canopus to protect the sacred spot. In Ludovico Ariosto's Orlando Furioso, the net is stolen 3,000 years later by Caligorant, who goes on to destroy the temple and the city.[11]