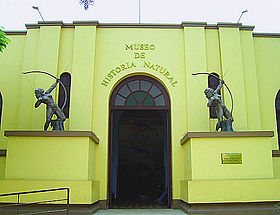 Natural History Museum of the National University of San Marcos.

The Natural History Museum (Museo de Historia Natural) in Lima, is Peru's most important museum of natural history. It was established in 1918 and belongs to the National University of San Marcos.

The museum was founded in 1918 by the Faculty of Sciences of the Universidad Nacional Mayor de San Marcos. The first director and founder of the museum was Carlos Rospigliosi.

The initial personal of the museum consisted in one curator in chief, and three curators for the areas of Zoology, Botany and Mineralogy.

The first scientific expedition was organized by Rospigliosi in April 1918, that collected specimens of fauna, flora and minerals from the departments of Junín and Huánuco. The second expedition was organized by the Geographic Society of Lima in 1920 that included the participation of Swedish geologist and explorer Otto Nordenskiöld. This expedition explored the highlands and foothills of the Andes in the department of Junín.

In 1920, the rector of the National University of San Marcos, Dr. Javier Prado, interceded in order to acquire the collections of Antonio Raimondi for the recently created museum. These samples included zoological, botanical and mineralogical specimens.

Originally, the museum was located at the Faculty of Humanities and Social Sciences at the campus in Parque Universitario. In 1934, it moved to its current location on Av. Arenales 1256, Jesús María in Lima, Peru.

Highlights of the collections include:

The first publication series was the Boletín del Museo de Historia Natural in 1937 aimed to divulge institutional activities and results of scientific research. The Publicaciones del Museo series in Zoology, Botany and Geology were published from 1948, the Memorias del Museo in 1951 and the Serie de Divulgación in 1964.

Since its foundation, the direction of the museum has been responsibility of the following researchers:

The museum is open for visits everyday.