Tourism in the Maldives

Tourism in the Maldives 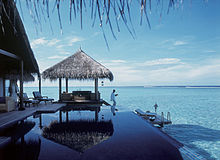 A resort in the Maldives. 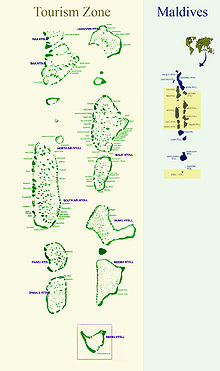 Tourism is the largest economic industry in the Maldives, as it plays an important role in earning foreign exchange revenues and generating employment in the tertiary sector of the country. The archipelago of the Maldives is the main source of attraction to many tourists visiting the country worldwide.

Tourism began in the Maldives in the late 1900's. A United Nations mission on development which visited the Maldive Islands in the 1960s did not recommend tourism, claiming that the islands were not suitable. Ever since the launch of the first resort in Maldives in 1972, however, tourism in Maldives has flourished. The arrival of the first tourist group is estimated to have occurred in February 1972. The group landed at Malé, the capital island of the Maldives, and spent 12 days in the country. Tourism in Maldives started with just two resorts with a capacity of about 280 beds in Kurumba Village and Bandos. At present, there are over 80 resorts located in the different atolls constituting the Republic of Maldives. Over the past few decades, the number of tourists in Maldives has risen continuously. Today, more than 500,000 tourists visit the Maldives each year.

Maldives is very famous for its natural beauty which includes the blue ocean and white beaches, accompanied by clean air and pleasant temperatures. The climate of the Maldives is ideal for visitors to get engaged in water sports such as swimming, fishing, scuba diving, snorkeling, water-skiing and windsurfing.

Due to its extraordinary underwater scenery and clean water, Maldives is ranked among the best recreational diving destinations of the world.[1]

Overview of a tropical resort 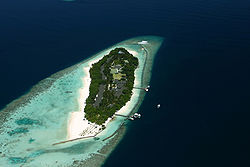 A tourist resort in the Maldives consists of an exclusive hotel on its own island, with its population entirely based on tourists and work force, with no local people or houses.

These islands developed for tourism are approximately 800 by 200 metres in size and are composed of sand and coral to a maximum height of about 2 metres above the sea. In addition to its beach encircling the island, each island has its own "house reef" which serves as a coral garden and natural aquarium for scuba divers and snorkelers. The shallow water enclosed by the house reef also serves as a large natural swimming pool and protects swimmers from the ocean waves and strong tidal currents outside the house reef.

The buildings on a typical resort includes rooms and suites reserved for use by its guests, restaurants, coffee shops, shops, lounges, bars, discos and diving schools. A portion of the island also contains staff lodgings and support services such as catering, power generators, laundry, and a sewage plant. On-island shops offer a wide range of products, such as souvenirs and artifacts. Most resorts offer a wide variety of activities such as aerobics, volleyball and table tennis.

Some promotion of ecotourism is practiced in the Maldives, with resorts emphasizing recycling of heat that is wasted in producing electricity and stricter policies of waste disposal.[2] Furthermore, the government aims to conserve the natural beauty of the islands before they are being altered into resorts by enforcing laws such as prohibition of catching turtles and reduction in the damages caused to the coral reefs.

Nevertheless, the Maldives have frequently come under criticism for their lack of protection of the local shark populations, which have sharply decreased after being hunted extensively for decades. In some areas of the island, sharks have entirely disappeared. Sharks are hunted primarily for their fins. Shark fins are exported from the Maldives to other countries in Asia, where they are regarded as a delicacy. The fins are amputated from the live animals, which are then thrown back alive into the sea.

Although laws exist that prohibit this practice in the Maldives, these laws are not respected or enforced by the local authorities.[3]

Workers in the tourism industry are represented by the Tourism Employees Association of Maldives (TEAM). TEAM argues the 25,000 workers employed in the industry face poor conditions and have very low wages (between US$80 to US$235 monthly) given the cost of living.[4] The employers' organisation is known as Maldives Association of Tourism Industry (MATI).