Lane End is a village and civil parish within Wycombe district in Buckinghamshire, England. It is just south of the M40 from High Wycombe, about two miles (3 km) west of Booker. The village is twinned with Saint-Pierre-d'Oléron in France.

Lane End is a village of some 3050 people,[2] set in the centre of a triangle bounded by High Wycombe, Marlow and Henley-on-Thames. The village is 650 feet (200 m) above sea level in the Chilterns, set in beautiful, rolling hills of farmland, beech woods and footpaths.

Within the civil parish of Lane End are the hamlets of Cadmore End, Ditchfield, Moor Common and Moor End.

In addition to working the land to provide wheat and barley to the breweries in Marlow and Henley, the inhabitants traditionally manufactured chairs or worked in a local iron foundry.[5]

The parish is served by the church of the Holy Trinity in Ditchfield Common, a Wesleyan chapel built in 1865, a Gospel mission hall dating from 1888 at Moor End, and the newest church – the Elim Centre in the centre of the village near the large estate area. 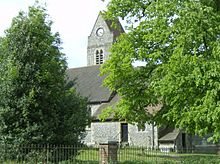 The village hall is probably one of the most used halls in the area, and is frequently brimming with visitors to dances, jumble sales, bridge club, bingo, The Lane End Players and home to the parish council. The Lane End Village pre-school also resides in the village hall every weekday morning during term time.

The village has a handful of old English pubs: Grouse and Ale (previously known as the Clayton Arms) and the Osborne Arms. The Old Sun pub closed in 2010 (put up for sale by Enterprise Inns). It will be converted back into a private residence with additional properties built on what was the garden area. Lane End also has a collection of village ponds, and two butchers in the High Street. Lane End is a starting spot for ramblers who journey down the Hambleden valley to look out for the red kite, the windmill at Turville or just to admire the exceptionally scenic countryside.

Lane End also has a very active conservation group, Lane End Conservation Group (LECG), members of which contribute to the parish by carrying out valuable work to improve the environment for locals and visitors.

Lane End has been long home to two small industrial estates (being unusual for the size of village), where several companies are based. Most notable of these companies is the global operation for Elga Labwater, part of the enormous worldwide Veolia Environment group.

Retail businesses include two butchers, two hairdressers, a supermarket, fish and chip shop, two newsagents and an off-licence. Three pubs in the High Street area (there used to be five!) means that you really do not need to leave the village for entertainment it is all within easy reach.