Structure of a lipopolysaccharide

Lipopolysaccharides (LPS), also known as lipoglycans, are large molecules consisting of a lipid and a polysaccharide joined by a covalent bond; they are found in the outer membrane of Gram-negative bacteria, act as endotoxins and elicit strong immune responses in animals.

LPS is the major component of the outer membrane of Gram-negative bacteria, contributing greatly to the structural integrity of the bacteria, and protecting the membrane from certain kinds of chemical attack. LPS also increases the negative charge of the cell membrane and helps stabilize the overall membrane structure. It is of crucial importance to gram-negative bacteria, whose death results if it is mutated or removed. LPS is an endotoxin, and induces a strong response from normal animal immune systems. It has also been implicated in non-pathogenic aspects of bacterial ecology, including surface adhesion, bacteriophage sensitivity, and interactions with predators such as amoebae.

LPS is required for the proper conformation of Omptin activity; however, smooth LPS will sterically hinder omptins.

LPS acts as the prototypical endotoxin because it binds the CD14/TLR4/MD2 receptor complex, which promotes the secretion of pro-inflammatory cytokines in many cell types, but especially in macrophages and B cells. In Immunology, the term "LPS challenge" refers to the process of exposing a subject to an LPS that may act as a toxin.

Being of crucial importance to gram-negative bacteria, these molecules make candidate targets for new antimicrobial agents.

Some researchers doubt reports of generalized toxic effects attributed to all lipopolysaccharides, in particular, for cyanobacteria.[1] 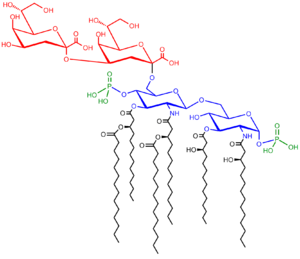 The saccharolipid Kdo2-Lipid A. Glucosamine residues in blue, Kdo residues in red, acyl chains in black and phosphate groups in green.

A repetitive glycan polymer contained within an LPS is referred to as the O antigen, O polysaccharide, or O side-chain of the bacteria. The O antigen is attached to the core oligosaccharide, and comprises the outermost domain of the LPS molecule. The composition of the O chain varies from strain to strain. For example, there are over 160 different O antigen structures produced by different E. coli strains.[2] The presence or absence of O chains determines whether the LPS is considered rough or smooth. Full-length O-chains would render the LPS smooth, whereas the absence or reduction of O-chains would make the LPS rough.[3] Bacteria with rough LPS usually have more penetrable cell membranes to hydrophobic antibiotics, since a rough LPS is more hydrophobic.[4] O antigen is exposed on the very outer surface of the bacterial cell, and, as a consequence, is a target for recognition by host antibodies.

The Core domain always contains an oligosaccharide component that attaches directly to lipid A and commonly contains sugars such as heptose and 3-deoxy-D-mannooctulosonic Acid (also known as KDO, keto-deoxyoctulosonate).[5] The LPS Cores of many bacteria also contain non-carbohydrate components, such as phosphate, amino acids, and ethanolamine substitutents.

Lipid A is, in normal circumstances, a phosphorylated glucosamine disaccharide decorated with multiple fatty acids. These hydrophobic fatty acid chains anchor the LPS into the bacterial membrane, and the rest of the LPS projects from the cell surface. The lipid A domain is responsible for much of the toxicity of Gram-negative bacteria. When bacterial cells are lysed by the immune system, fragments of membrane containing lipid A are released into the circulation, causing fever, diarrhea, and possible fatal endotoxic shock (also called septic shock). 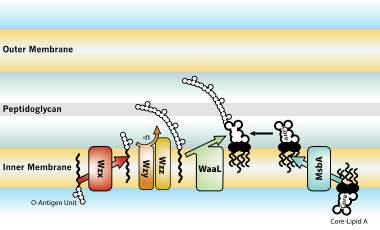 LPS Final Assembly: O-antigen subunits are translocated across the inner membrane (by Wzx) where they are polymerized (by Wzy, chain length determined by Wzz) and ligated (by WaaL) on to complete Core-Lipid A molecules (which were translocated by MsbA).[6] 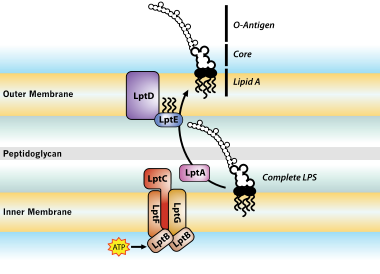 LPS Transport: Completed LPS molecules are transported across the periplasm and outer membrane by the proteins LptA, B, C, D, E, F, and G[7]

The making of LPS can be modified in order to present a specific sugar structure. Those can be recognised by either other LPS (which enables to inhibit LPS toxins) or glycosyltransferases that use those sugar structure to add more specific sugars. It has recently been shown that a specific enzyme in the intestine (alkaline phosphatase) can detoxify LPS by removing the two phosphate groups found on LPS carbohydrates.[8] This may function as an adaptive mechanism to help the host manage potentially toxic effects of gram-negative bacteria normally found in the small intestine.

Variability and effect upon specificity 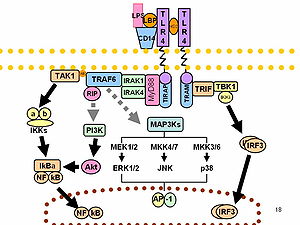 O-antigens (the outer carbohydrates) are the most variable portion of the LPS molecule, imparting the antigenic specificity. In contrast, lipid A is the most conserved part. However, lipid A composition also may vary (e.g., in number and nature of acyl chains even within or between genera). Some of these variations may impart antagonistic properties to these LPS. For example Rhodobacter sphaeroides diphosphoryl lipid A (RsDPLA) is a potent antagonist of LPS in human cells, but is an agonist in hamster and equine cells.

It has been speculated that conical Lipid A (e.g., from E. coli) are more agonistic, less conical lipid A like those of Porphyromonas gingivalis may activate a different signal (TLR2 instead of TLR4), and completely cylindrical lipid A like that of Rhodobacter sphaeroides is antagonistic to TLRs.[9][10]

LPS function has been under experimental research for several years due to its role in activating many transcription factors. LPS challenge also produces many types of mediators involved in septic shock. Humans are much more sensitive to LPS than other animals (e.g., mice). A dose of 1 µg/kg induces shock in humans, but mice will tolerate a dose up to a thousand times higher.[13] This may relate to differences in the level of circulating natural antibodies between the two species.[14][15] Said et al. showed that LPS causes an IL-10-dependent inhibition of CD4 T-cell expansion and function by up-regulating PD-1 levels on monocytes which leads to IL-10 production by monocytes after binding of PD-1 by PD-L.[16]

Bruce Beutler was awarded a portion of the 2011 Nobel Prize in Physiology or Medicine for his work demonstrating that TLR4 is the LPS receptor.[17][18]