Contact (コンタクト, Kontakuto?) is a role-playing video game developed by Grasshopper Manufacture for the Nintendo DS handheld game console. It was published by Marvelous Entertainment in Japan on March 30, 2006, by Atlus in North America on October 19, 2006, and by Rising Star Games in Australasia and Europe on January 25, 2007 and February 6, 2007 respectively.

The story begins with a scientist known as the Professor flying through space, fleeing from a mysterious enemy known only as the "CosmoNOTs" (Cosmic Nihilist Organization for Terror). He ends up crash landing on a strange planet, losing the "cells" that power his ship. Without power, he is stranded. He enlists the help of Terry, a young boy. Terry agrees to help the Professor by exploring the planet and locating the cells. Helping the Professor is the only way that Terry will be able to get home, but the Klaxon Army are tracking them down, the cells are hidden in some dangerous areas and, as the game progresses, the Professor's intentions are slowly thrown deeper and deeper into question.

The player is included in the storyline as a separate character from Terry, and the game's characters recognize the player as "controlling" Terry using the DS, breaking the fourth wall. Throughout the game, the Professor will talk directly to the player to give hints on how to use the controls and to voice his concerns about Terry. The Professor is eager to keep the player's existence and their role in Terry's life a secret from the boy. 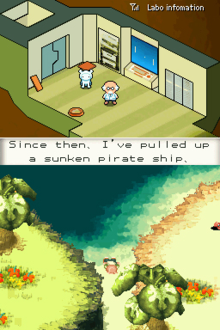 The top screen shows the Professor's ship in a pixelated, isometric view, while the bottom screen, where Terry is situated, uses a hand-drawn graphical style.

In Contact, the Professor talks directly to the player, giving instructions in order to help Terry. The game also differs from ordinary RPGs in that experience gain is instantaneous, meaning that leveling up in the middle of a battle is required, complementing the real time combat system. Rather than the tradition in RPGs where a character levels up, increasing multiple statistics at once, Contact's experience system increases Terry's statistics individually as he performs different actions.[5] For instance, when Terry takes damage, his defense increases; when he damages an enemy, his strength increases.

There is a costume system through which new skills can be learned. Up to eight costumes can be obtained, turning Terry into such forms as a fisherman, a cook, a thief, an "aqua shot" (as is the name of the costume), a car driver, a digger and a pilot.[6] With greater use, a costume will add extra powers to its associated skills and statistics, including elemental magic and magical properties. Terry also has weapon-based skills. These weapons can be gathered as the player progresses. The weapons are divided into three different categories; punching (gloves), striking (clubs), and slashing (swords). Each skill can be upgraded by using each type of weapon throughout the game. Each enemy has its own weakness, so some of Contact's strategy involves switching to the appropriate weapon to exploit an enemy's weakpoint. The game also uses decals or stickers. The player can stick multiple decals to Terry, resulting in added powers. Decals can also be used to attack enemies, heal the character's wounds, and other functions.[7]

There are other statistics that affect Terry's relationship with the game's non-playable characters, including fame, courage, and karma. The character can attack any NPC at will. As animosity towards Terry grows, townsfolk will attack Terry on the street or run when they see him. The game contains a number of side-quests. While none of these are necessary to complete the game, certain costumes cannot be obtained without completing a particular sidequest, and the sidequests themselves add significant replay value to the game. The game additionally makes use of the Nintendo Wi-Fi Connection. During Contact Mode, the player can exchange friend codes with another player and make contact with one-another. In the single player adventure, upon reaching the WiFisland, all friends who have been contacted through friend codes appear as non-playable characters, sharing tips and items.[8] Up to 8 players can be stored as NPCs in the WiFisland.[9]

Contact was developed by Grasshopper Manufacture as the company's first RPG on the DS.[10] Goichi Suda, Grasshopper Manufacture president and supervisor for Contact, explained that they wanted to create the game in order to present something unique to the genre, as opposed to the traditional fantasy period pieces found in most RPGs. The developer also tried to push boundaries with the sound design, which consists of musical style "only possible in video games".[10][11] The game's main designer and director is Akira Ueda, a former Square graphic designer and a prominent contributor to the Shining Soul games.[12] Ueda described the game's main storyline as providing a "framework of diversions" such as combat, item collection, and monster hunting.[13] He also stated that the game uses the touchscreen in several ways through the game. "We've endeavoured to use as many of the DS' features as we could, but not in an obvious way," Ueda explained. "Our philosophy was 'How can we use these fantastic features properly?'. We wanted them to work for the story rather than dictate it, which is something we feel is incredibly important for an original concept like Contact."[13]

Contact features Apple IIe-style fonts on its title screen and 8-bit mini-games.[14] However, the main graphical draw of Contact is its contrast in art styles between the two DS screens.[10][12] A simple, pixelated style makes up the top screen, while the bottom screen has a pre-rendered, detailed art style. These styles clash when the Professor transitions from one screen ot the other. Ueda was originally developing the game for the Game Boy Advance. Producer Takeshi Ogura revealed that on this handheld, the two art styles were to switch back and forth. However, when development moved to the DS, the team decided to take advantage of the dual screens by showing them simulatenously.[10][12] As implied by Ueda, this differentiation has been done purposely as "it underlines how the player and the Professor are aliens to each other. They must make contact, communicate and co-operate to make it through the game" and to "create feelings of nostalgia; just like the interplay between the 'real' and 'game' worlds."[13][11]

Contact was picked for a North American release by Atlus prior to its Japanese launch. The company's localization director, Tomm Hulett, was attacted to the style and humor of the game, comparing it to the cult-classic EarthBound.[14] As per the company's translation policy, the English language localization of the game features no alterations from the original Japanese, aside from the name of the protagonist being changed from Cherry to Terry.[14][15] According to Hulett, it was difficult trying to figure out which parts of the dialogue were serious and which were comical. Also, the files he used did not show which character was speaking, which was a problem when multiple characters conversed.[14]

Critical reception for Contact has been above average. The game currently hold an aggregate review score of 73% on both GameRankings and Metacritic.[16][17] Gamebrink gave the game 9.0/10.0, comparing the statistics and level systems to games like Oblivion.[26] The site praised the story, job system and, especially, the music, but defined the battles as "fairly shallow."[27] On the other hand, the game received a 6.5 out of 10 by Steve Thomason in the November 2006 issue of Nintendo Power. His major complaints were that the game was "frustrating because your objectives are often obtuse and unintuitive and the game can be brutally difficult."

Contact performed poorly on the Japanese market at just 6,064 copies sold during its first week on sale.[28] Hulett suspects that the game suffered from low sales in the region due to the game's concurrent release with the highly-anticipated handheld title Mother 3.[14] However, it was announced during a 2006 interview between Gamasutra and developer Grasshopper Manufacture that a sequel to Contact is in the works by Ueda's own company Audio, Inc.[10]