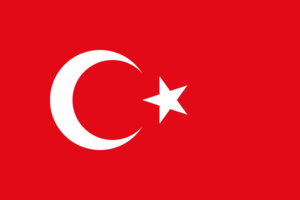 Use = 111111
Symbol =
Proportion = 2:3
Adoption =
Design = A field defaced with a crescent moon and five-pointed slightly left of centre.
Type = National

The flag of consists of a white crescent moon and a on a background. The flag is called "Ay Yıldız" (literally, moon star) or "Alsancak" (red banner) in Turkish.

The has a complex origin since it is an ancient design, and uses the same symbols of the late flag of the Ottoman Empire which was adopted in 1844 with the reforms; though the shape, placement and shade of the color varies. The geometric proportions of the flag were legally standardized with the Turkish Flag Law in 1936. The shade of red used in the flag is approximated by 186, or RGB (227, 10, 23).

The crescent and star, while generally regarded as today, have long been used in and by the old Turks,Fact|date=May 2008 quite before the advent of Islam.Fact|date=May 2008According to one theory, the figure of crescent has its roots in s, markings used as livestock brand or stamp, used by nomadic Turkic clans of .Fact|date=May 2008

The current design of the Turkish flag is directly derived from the late Ottoman flag, which had acquired its final form in 1844. It is known that the Ottomans used red flags of triangular shape at least since 1383, which came to be rectangular over the course of history.Fact|date=May 2008

Ottomans used several different designs, most of them featuring one or more crescents, for different purposes, such as the flag with green background signifying the . During the late imperial period, the distinctive use of the color red for secular and green for religious institutions became an established practice. In , the eight-pointed star was replaced with a five-pointed star and the flag reached the form of the present Turkish flag; Red was the colour of , the Caliph who ruled from AD 634 to 644 and was known as a great consolidator of the Islamic Empire. In the 14th century red became the colour of the . The crescent and star is the symbol of Turks.

Possible origins of the flag

The crescent moon and star are holy symbols for pre-Islamic Turkish tribes while red is the cardinal colour for westfact|date=July 2008. It has been recently found out in 2004 in in archaeological excavations that used crescent and star on their coins around 6th century AD. [ [http://www.turkishdailynews.com.tr/article.php?enewsid=7782 Coin discovery sheds light on Turkic civilization - Turkish Daily News Mar 10, 2005 ] ]

Another possibility regarding the flag dates it back to and then the . Byzantium first produced coins with the crescent and star symbol in the 4th century BC. According to legend, this was to honour the moon-goddess , who the inhabitants believed had saved the city from attack by in 340-339 BC ["Encyclopedia of Ancient Greece" by Nigel Guy Wilson (Routledge, 2006) p.136] ["The Complete Dictionary of Symbols" by Jack Tresidder (Chronicle Books, 2005) p.127)] . The crescent and star were used as the symbol of the Greek city of for 8 centuries before adopted by the as the banner of and when the Ottomans captured Constantinople, and adopted the title it was in tandem adopted as the symbol of the Ottoman Empire (the moon refers to the Greek goddess , while the star refers to the ).Fact|date=May 2008. In 330 AD Constantine I had added the Virgin Mary's star to the flag also commonly found on Icons of Greek Orthodoxy to this dayFact|date=May 2008.

The origin of the flag is the subject of various s in the country, some contradicting the historical knowledge about the Ottoman Flag.

The most accepted legend of the flag in Turkey is that in a pool of blood of Turkish warriors, there was a reflection of the crescent moon and a star. Three theories are:
#In the year 1071, after the and the defeat of the army, the Seljuk Khan, was roaming the battlefield where he saw the reflection of the crescent moon and the star on a pool of blood of Turkish warriors. After he saw this image, he decided that this would be the flag representing the Turks.
#After the on July 28 1389, Murad I was assassinated and on that night there was a unique moment of and the next to each other. If one considers this sight on a pool of blood, the current structure of the Turkish flag can be seen easily. One problem with this theory is that the Battle of Kosovo actually took place over a month earlier - on the 15th of June in the (23rd of June in the ).
#, the founder of the modern Republic of Turkey, walking on a battlefield one night after a victorious battle in the , saw the reflection of the star and crescent formation in a large pool of blood on the rocky hill terrain of Sakarya.

* A dream of the first Ottoman Emperor in which a crescent and star appeared from his chest and expanded, presaging the dynasty's seizure of Constantinople. [Flagspot.net: [http://flagspot.net/flags/tr.html#mean Meaning of the Turkish Flag] , retrieved on Dec 6, 2006]

* A crescent and star were spotted on the night of the to in .

The fundamentals of the Turkish flag were laid down by Turkish Flag Law No. 2994 on , . Turkish Flag Regulation No. 2/7175 dated , , and Supplementary Regulation No. 11604/2 dated , , were enacted to describe how the flag law would be implemented. The Turkish Flag Law No. 2893 dated , , and Published in the Official Gazette on , , was promulgated six months after its publication. According to Article 9 of Law No. 2893, a statute including the fundamentals of the implementation was also published.

Note that the above specification is what is given by Turkey's flag law, according to Flags of the World. The number 1/3 appears to be inaccurate; the other figures imply that distance E is really 0.34875 G.

imilarity with the Aceh Independentist Flag

The flag used by the independence-seeking rebels in the n province of , who have conducted a decades-long struggle against both Dutch colonial rule and the post- Indonesian government, bears an obvious resemblance to the flag of Turkey; presumably dating from the devoutly Muslim inhabitants of 16th century Aceh who declared allegiance to the Ottoman Sultan and Caliph in 1566 and asked for his support against the encroaching Portuguese and Dutch, upon which the Ottoman Indian Ocean Fleet under arrived at Aceh in 1569.

* [http://www.ttk.gov.tr/yayinlar/fulltext/bayrakkanunu.htm Türk Bayrağı Kanunu] , the Turkish text of the Turkish Flag Law No. 2893 dated September 22, 1983, establishing the proportions, production and rules of usage of the flag of Turkey
*