Tinea versicolor (also known as Dermatomycosis furfuracea,[1] Pityriasis versicolor,[1] and Tinea flava)[1] is a condition characterized by a rash on the trunk and proximal extremities.[1] Recent research has shown that the majority of Tinea versicolor is caused by the Malassezia globosa fungus, although Malassezia furfur is responsible for a small number of cases.[2][3] These yeasts are normally found on the human skin and only become troublesome under certain circumstances, such as a warm and humid environment, although the exact conditions that cause initiation of the disease process are poorly understood.[2][4]

The condition pityriasis versicolor was first identified in 1846.[5]

The symptoms of this condition include:

These spots commonly affect the back, underarm, upper arm, chest, lower legs, and neck. Occasionally it can also be present on the face. The yeasts can often be seen under the microscope within the lesions and typically have a so called "spaghetti and meat ball appearance"[6] as the round yeasts produce filaments.

In people with dark skin tones, pigmentary changes such as hypopigmentation (loss of color) are common, while in those with lighter skin color, hyperpigmentation (increase in skin color) are more common. These discolorations have led to the term "sun fungus".[7] 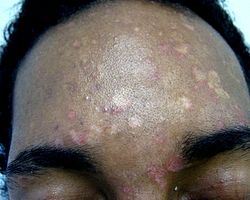 Tinea versicolor is a common condition. It is estimated that 2 to 8% of the population of the United States has it. This skin disease commonly affects adolescents and young adults, especially in warm and humid climates. It is thought that the yeast feeds on skin oils (lipids) as well as dead skin cells. Infections are more common in people who have seborrheic dermatitis, dandruff, and hyperhidrosis.[4] 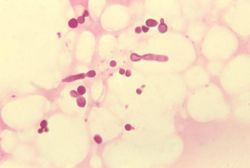 Malassezia furfur in skin scale from a patient with tinea versicolor

Treatments for tinea versicolor include:

Pevaryl Foaming Solution (for fungal skin infections an tinea - Apply Pevaryl Foaming Solution to freshly showered skin and scalp. Rub in well for 3-5 minutes. Dry hair but DO NOT rinse the solution off your body. Shower off next morning if desired. Repeat the process for the next 2 evenings. Repeat the course 1 month and 3 months after the initial treatment to prevent relapse