Tinea cruris, also known as crotch itch, crotch rot, Dhobie itch, eczema marginatum,[1] gym itch,[1] jock itch, and ringworm of the groin[1] in American English[2]:303 is a dermatophyte fungal infection of the groin region in either sex,[3] though more often seen in males. In the German Sprachraum this condition is called Tinea inguinalis (from Latin inguen = groin) whereas Tinea cruris is used for a dermatophytosis of the lower leg (Latin crus).[4]

Candidal intertrigo is an infection of the skin by Candida albicans, more specifically located between intertriginous folds of adjacent skin, which can be present in the groin or scrotum, and be indistinguishable from fungal infections caused by Tinia. However, candidal infections tend to both appear and disappear with treatment more quickly.[2]:309

As the common name for this condition implies, it causes itching or a burning sensation in the groin area, thigh skin folds, or anus. It may involve the inner thighs and genital areas, as well as extending back to the perineum and perianal areas. 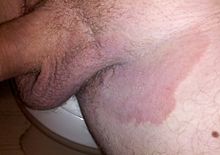 Red rash caused by Tinea cruris on the groin

The acute infection begins with an area in the groin fold about a half-inch across, usually on both sides. The area may enlarge, and other sores may develop in no particular pattern. The rash appears as raised red plaques (platelike areas) and scaly patches with sharply defined borders that may blister and ooze.[7]

The skin within the border turns a reddish-brown and loses much of its scale. The border may exhibit tiny pimples or even pustules, with central areas that are reddish and dry with small scales.[8][9]

If infected with candidal organisms, the rash tends to be redder and wetter. The skin of the penis may be involved, whereas other organisms spare the penis.

Macroconidia from the epidermophyton floccosum

Opportunistic infections (infections that are caused by a diminished immune system) are frequent. Fungus from other parts of the body (commonly tinea pedis or 'athlete's foot') can contribute to jock itch. A warm, damp environment allowing the fungus to cultivate greatly contributes; especially with tight, sweaty or rubbing clothing such as a jockstrap.

The type of fungus that most commonly causes tinea cruris is called Trichophyton rubrum. Some other contributing fungi are Candida albicans, Trichophyton mentagrophytes and Epidermophyton floccosum.

Medical professionals suggest keeping the groin area clean and dry by drying off thoroughly after bathing and putting on dry clothing right away after swimming or perspiring.

Other recommendations are: not sharing clothing or towels with others, showering immediately after athletic activities, wearing loose cotton underwear, avoiding tight-fitting clothes, and using antifungal powders.[10][11]

Tinea cruris is best treated with topical antifungal medications of the allylamine or azole type.[12] These anti-fungal agents stop fungi from producing ergosterol, an essential component of fungal cell membranes. If ergosterol synthesis is completely or partially inhibited, the fungal cell is unable to construct an intact cell membrane, and dies. Allylamines and thiocarbamate antifungals (tolnaftate, Tinactin etc.) and are effective against Tinea cruris, but not against Candida albicans, which requires an azole type drug, making azole drugs, effective against both types of infections, the first choice for topical treatment of infections of unknown etiology in intertriginous areas.

If the skin inflammation causes discomfort and itching, glucocorticoid steroids (such as 1% hydrocortisone cream) may be combined with the anti-fungal drug to help prevent further irritation due to the patient scratching the area. Apart from the quicker relief of symptoms, this also helps minimize the risk of secondary bacterial infection caused by the scratching. However, steroids may exacerbate the condition if used alone for fungal infections because they hinder the body's immune system.

Since fungi tend to thrive in warm, dark, damp conditions, minimizing these conditions can help treat and prevent jock rash. Some useful measures are: wearing boxer underwear or no underwear, increasing air-flow by sleeping near a fan, wearing loose sleepwear or no sleepwear, exposing the area to wind and sun, and thoroughly cleaning the area with a hand-held shower head and soap.