Nanning (simplified Chinese: 南宁; traditional Chinese: 南寧; pinyin: Nánníng, Zhuang: Namzningz, meaning 'South Tranquility') is the capital of the Guangxi Zhuang Autonomous Region in southern China. It is known as the "Green City" because of its abundance of lush tropical foliage.

A county seat called Jinxing was first established at the site in AD 318. This became the administrative seat of a commandery. Nanning was once the territory of the Baiyue people and became the capital of Jinxing Prefecture which was separated from Yulin Prefecture of the Eastern Jin Dynasty.

In 589 the Jinxing commandery was dissolved, and the county was renamed Xuanhua. Under the Tang dynasty (618–907) the prefecture of Yong (邕州Yongzhou) was established there; it was garrisoned to control the non-Chinese districts in Guangxi and on the Yunnan–Guizhou provincial border. In the mid-9th century the Tang and the Yunnan state of Nanzhao fought over it, and after 861 it was briefly occupied by Nanzhao. It remained a frontier prefecture throughout the Song dynasty (960–1279), being the scene of a rebellion led by Nong Zhigao in 1052 and thereafter a garrison town.

In the Yuan Dynasty in 1324, it was renamed Nanning Lu (an administrative division) of Yongzhou Lu meaning "May peace maintain in the southern frontier", hence the name Nanning. Historically, Nanning was famous for trade, and had permanent business offices from other areas in China since the Song Dynasty.

Under the Ming (1368–1644) and Qing (1644–1911) dynasties, it was a superior prefecture. In the Ming Dynasty Nanning developed into the commodity distributing center of the Zuojiang River and the Youjiang River with the reputation of "Little Nanjing".

Opened to foreign trade by the Chinese in 1907, Nanning grew rapidly. From 1912 to 1936 it was the provincial capital of Guangxi, replacing Guilin.

Early in the 20th century the city spilled over from the old walled city into a southern suburban area. In the 1930s Nanning became the centre of a "model provincial government" under the warlord Li Zongren, and a spacious modern city was laid out. During the Second Sino-Japanese War (1937–45), Nanning was temporarily occupied in 1940 by the Japanese. It subsequently became an important U.S. air base supporting the Chinese armies in Guangxi, but during 1944–45 it was again under Japanese occupation.

In 1949 Nanning again became the provincial capital, first of Guangxi province and then (1958) of the renamed Guangxi Zhuang Autonomous Region. Until then Nanning had essentially been a commercial center dependent on Guangzhou and on the Xi River system. In the late 1930s a railway was begun, joining Hengyang in southern Hunan province with Guilin, Liuzhou, Nanning, and the Vietnam border, while another was begun from Liuzhou to Guiyang in Guizhou. The construction of the Nanning section of this line was halted in 1940 by the Japanese advances, however, and was not completed until 1951, after which Nanning was directly linked with central China; completion of a branch line to the port of Zhanjiang (in Guangdong) in 1957 gave it a direct outlet to the sea. During the French war in Indochina (1946–54), Nanning was the chief support base in China for the Vietnamese forces, and during the Vietnam War in the 1960s and early 1970s it again became a staging post for the sending of supplies southward to North Vietnam. It was also an important military supply center during the Sino-Vietnam confrontation in 1979.

Formerly an essentially commercial and administrative center, Nanning from 1949 experienced industrial growth. The city is surrounded by a fertile agricultural region producing subtropical fruits and sugarcane; food processing, flour milling, sugar refining, meatpacking, and leather manufacture are important in the city. Nanning has been a center for printing and paper manufacture, and it is also important in heavy industry.

After the recognition of the Zhuang ethnic minority in 1958, Nanning became the chief center for the training of Zhuang leaders. Guangxi University, a large medical school, and a school of agriculture all date from the 1920s.

A cavern at Yiling, 19 km to the northwest, has a 1,100 m passage through picturesque stalactites. In the 1970s colored lights were installed and the cavern was developed as a tourist attraction.

Nanning serves as host for the annual China-ASEAN EXPO (CASEAN EXPO) which began in 2005 and was the venue for the 2006 "World Robotics Olympiad".

Nanning is located in the southern part of Guangxi Zhuang Autonomous Region, 160 km from the border with Vietnam. It has an area of 22,293 square kilometers.[1]

The city is located on the north bank of the Yong River, the chief southern tributary of the Xi River, and lies some 30 km below the confluence of the Yu and the Zuo rivers. The Yong River (which later becomes the Yu River) affords a good route to Guangzhou and is navigable by shallow-draft junks and motor launches, even though it is obstructed by rapids and sandbanks.

Nanning is situated in a hilly basin with elevations between 70 and 500 m above sea-level. Qingxiu Mountain dominates the southern part of town.

Nanning has a warm, monsoon-influenced humid subtropical climate (Köppen Cfa). Summers are hot and humid with average highs almost reaching 33 °C in July and August. Winters are mild and somewhat damp with 10 °C average lows in January. It is often windy or breezy and very rainy in the city, with about 1,310 millimetres (51.6 in) of rainfall annually. Nanning is also frost-free for all but 3 or 4 days a year and snowfall is virtually unheard of in the city.

Nanning's warm climate gives it a large amount of biodiversity. There are many species of animals and more than 3,000 species of plants. The city flower is the Jaba flower, an evergreen shrub, and the city tree is the almond tree which is regarded as the backbone tree used for greening and landscaping throughout the city.

Nanning has jurisdiction over 6 districts, 6 counties, and 6 development zones.

Nanning has many parks with tropical lush green landscape, it is one of the "greenest" cities in China, and it's known as "Green City"(绿城). Nanning's downtown skyline is rapidly changing and the city is becoming an important hub in China. 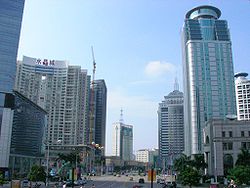 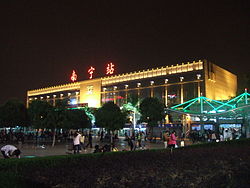 In November 2008 construction of a high-speed rail line from Nanning to Guangzhou began, which will cut travel time between the two cities from 13 hrs to 3 hrs. The line is set to be 577 km long, of which 61% will be in Guangxi, and will allow trains to run up to 200 km/h. It will be completed in four years and cost about 41 billion yuan(about 6 billion U.S. dollars), according to the Ministry of Railways. The goal is to better integrate Pan-Pearl River Delta and southeast China with members of the ASEAN.[3]

There are also plans to build a high-speed railway to Pingxiang on the Vietnamese border.[4]

At 2010 census , the total population of Nanning was 6,611,600, among which 2,875,220 million were urban residents (after the adjustment of administrative divisions) and 2,480,340 million in the built up area made of 5 out of 6 urban districts. Nanning is a city in which Zhuang ethnic group live in compact communities, and also the only city in all the autonomous regions of China with open coastal areas. Thirty-five ethnic groups live in compact communities in Nanning, including people of Zhuang, Han, Yao, Hui, Miao, Dong, and Man minorities.

Nanning is the center of science and technology, education, culture and health in Guangxi Province. There are altogether 54 scientific research institutes subordinate to districts. 10 colleges and 50 trade schools are training specialised personnel of all kinds. Now there are 62 mass cultural organizations, 13 performing groups, 8 cinemas, 285 projecting units, over 70 karaoke halls and over 1000 newsstands. Bookshops and cultural markets can be found everywhere.

Nanning has not only local cuisine but also food from other areas of China and abroad. Traditional food culture can be found around most streets of Nanning. Nanning food shares the style of Cantonese food and of Southeast Asia. Chinese cuisine including Guangdong, Szechuan, Hunan and Jiangsu as well as Japanese, Thai and Western cuisines can be found.

Nanning is close to scenic Guilin, with its world famous hillscape, northern and western Guangxi and its minority villages, and the border with Vietnam in the south.

In 1998 alone, the city received 26,260 overseas tourists, earning foreign exchange totaling US$7.0663 million, some 5.01 percent of the city's total income. An addition of 6.89 million domestic visitors brought RMB 3.23 billion yuan into the city, some 19.95 percent of the total.

The major tourist attractions in Nanning are as following:

Note: Institutions without full-time bachelor programs are not listed.

Nanning is twinned with: