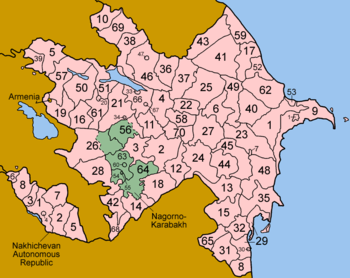 Map of the administrative divisions of Azerbaijan. Note that the divisions of the Nakhchivan exclave are listed in the next section.

Politically, Azerbaijan is divided into:

This list is for the main part of Azerbaijan; the rayons of Nakhchivan Autonomous Republic are listed below and numbered separately. Some rayons are completely or partially in the self-proclaimed Nagorno-Karabakh Republic, shown on the map in green; this is noted in the list.

The rayons are further divided into municipalities. 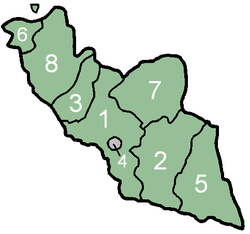 The seven rayons and one municipality of the Nakhchivan Autonomous Republic are listed and numbered separately.