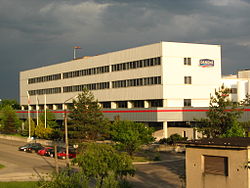 Groupe Danone is a French food-products multinational corporation based in the 9th arrondissement of Paris. It claims world leadership in fresh dairy products,[2] marketed under the corporate name, and also in bottled water. In 2007 it swapped its world number 2 position as producer of cereals and biscuits[2] for the same position in baby foods, having sold the biscuits division to Kraft Foods[3] and acquired Numico. In the United States, the Danone brand is marketed as Dannon, a subsidiary of Groupe Danone (under the name The Dannon Company).

Besides the Danone/Dannon brand of yogurts, the company owns several internationally known brands of bottled water: Volvic, Evian, and Badoit. About 56% of its 2006 net sales derived from dairy, 28% from beverages, and 16% from biscuits and cereals.[4]

Danone owns many water brands worldwide. In Asia, it has acquired Yili, Aqua (Indonesia) and Robust (92%) and has a 51% holding in China's Wahaha Joint Venture Company, giving it a total market share of 20% and making it the leading vendor of packaged water in Asia.

The original company bearing the corporate name was founded in 1919 by Isaac Carasso in Barcelona (Spain) as a small factory producing yoghurt. The factory was named Danone, a Catalan diminutive of the name of his first son, Daniel Carasso.

Ten years later, the first French factory was built. During the German occupation of France during World War II, Daniel moved the company to New York to avoid persecution as a result of his Jewish faith. In the United States, Daniel partnered with the Swiss-born Spaniard Joe Metzger and changed the brand name to Dannon to sound more American.

In 1951, Daniel Carasso returned to Paris to manage the family's businesses in France and Spain, and the American business was sold in 1959. In Europe in 1967, Danone merged with Gervais, the leading fresh cheese producer in France and became Gervais Danone.

Another branch of Groupe Danone descended from industrial glassmaker Boussois-Souchon-Neuvesel (BSN), which was founded by the family of Antoine Riboud. After a failed attempted takeover battle for its larger rival Saint-Gobain, Riboud transformed it into one of Europe's leading food groups in the 1970s through a series of acquisitions and mergers, including the 1973 merger with Gervais Danone. 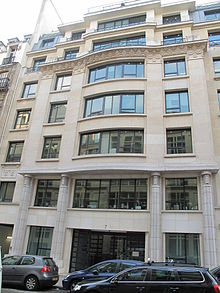 The acquisitions initially took the shape of vertical integration, acquiring Alsacian brewer Kronenbourg and Evian mineral water who were the glassmaker's largest customers. This move provided content with which to fill the factory's bottles.[5] In 1973, the company merged with Gervais Danone and began to expand internationally. In 1979, the company abandoned glassmaking by disposing of Verreries Boussois. In 1987, Gervais Danone acquired European biscuit manufacturer Général Biscuit, owners of the LU brand, and, in 1989, it bought out the European biscuit operations of Nabisco.[6]

In 1994, BSN changed its name to Groupe Danone, adopting the name of the group’s best-known international brand. Franck Riboud succeeded his father, Antoine, as the company's chairman and chief executive officer in 1996 when Riboud senior retired. Under Riboud junior, the company continued to pursue its focus on three product groups (dairy, beverages, and cereals) and divested itself of several activities which had become non-core.

In 1999 and 2003, the group sold 56% and 44%, respectively, of its glass-containers business. In 2000, the group also sold most of its European beer activities (the brand Kronenbourg and the brand 1664 were sold to Scottish & Newcastle for UK£ 1.7 billion;[7] Its Italian cheese and meat businesses (Egidio Galbani Spa) were sold in March 2002;[8] as were its beer producing activities in China. The company's British (Jacob's) and Irish biscuit operations were sold to United Biscuits in September 2004.[9] In August 2005, the Group sold its sauces business in the United Kingdom and in the United States (HP Foods),[8] in January 2006, its sauces business in Asia (Amoy Food) was sold to Ajinomoto.[6] Despite these divestitures, Danone continues to expand internationally in its 3 core business units, emphasising health and well-being products.[10]

In July 2007, it was announced that Danone had reached agreement with Kraft to sell its biscuits division, including the LU and Prince brands, for around €5.3 billion.[3] Also in July 2007, a €12.3 billion cash offer by Danone for the Dutch baby food and clinical nutrition company Numico was agreed to by both boards,[11] creating the world's second largest manufacturer of baby food.

Due to its narrow focus and relatively small size, Danone is potentially an attractive takeover target for its competitors, namely Nestlé and Kraft Foods. In mid-July 2005, the share price of Danone rose 20% within two weeks on rumours of a bid approach by PepsiCo, although this intention was denied.[12] Upon realising that a takeover of a national treasure such as Danone by a foreign company was indeed possible in the capital markets, the "economically patriotic"[13] French government stepped in by drafting a law to protect companies in "strategic industries" such as Danone[14] from takeover. This has been dubbed the "Danone Law".[15]

Speculation was renewed once again in the summer of 2006, when PepsiCo declared its intention to grow significantly in France through a sizeable non-hostile acquisition,[16] and Kraft was also reported in Le Figaro, a French daily newspaper, as not having ruled out an acquisition on French soil.[17] The stock market apparently marked down the possibility of a bid by PepsiCo following Danone's acquisition of Numico.[18] 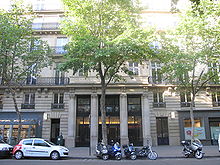 Danone has its head office in the 17 Boulevard Haussmann building in the 9th arrondissement of Paris.[19] Previously the company's head office and its 500 employees were located in several buildings on Rue de Téhéran in the 8th arrondissement of Paris.[20][21] In 2002 the head office moved to its current location. Frank Riboud, the Danone CEO, stated that the company remained in central Paris so the lives of the employees would not be disrupted too much.[21] 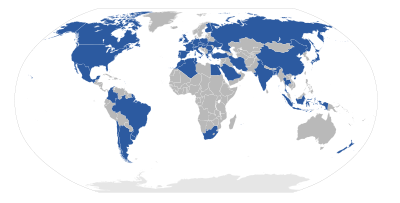 Danone has adopted a strategy of growth through joint ventures, particularly in fast-growing emerging markets, because it lacked the management depth and size to grow quickly. In its markets, Danone has built an attractive portfolio in emerging markets over the past 10 years which represents 30% of its sales.[25]

Danone has been having problems with some of its other joint ventures, notably its joint venture with Hangzhou Wahaha Group (1996) and Britannia Biscuits in India (1995), which have been in high-profile disputes since early 2007 and 2006, respectively. Danone filed for arbitration with Britannia Biscuits in the Bombay High Court on 29 June; arbitration with the Wahaha Group was accepted in Hangzhou on 17 June 2007.

Under the 1995 joint venture agreement to acquire Britannia Industries, Danone agreed not to launch food brands within India without the consent of the Wadia family.[27] The partners also agreed on a right of first refusal to the other partner in the event of the other wishing to exit.[28]

In light of frustrations with the growth and marketing strategy in India, Danone initiated plans to independently invest in an Indian dairy subsidiary. In May 2007, Nusli Wadia told the Ministry of Commerce and Industry that Danone invested in Avesthagen, a Bangalore-based bio-nutrition company, in October 2006 in violation of the government's Press Note 1, 2005, which requires a foreign company to obtain the consent of its Indian joint venture partner before pursuing an independent business in a similar area, including joint ventures based purely on technical collaboration. Danone argued that Press Note 1 did not apply to it as it did not have a formal technology transfer or trademark agreement with Avesthagen, and that its 25% holding in Britannia was indirect.[29] Wadia also filed a case in the Bombay High Court for a breach of a non-compete clause in the contract. The court ordered Danone not to alienate, encumber, or sell shares of Avestagen.[30]

In September 2007, the Foreign Investment Promotion Board of India rejected Danone's claims that it does not need a non-compete waiver from the Wadias in order to enter into business in India alone.[31]

In March 1996 Danone signed an agreement to purchase 20 percent of the Strauss Group, Israel's second largest food manufacturer. Under the agreement, Danone purchased about 20% of Strauss Dairies (today Strauss Health division) in Nahariya. Since the 1970s, Strauss Dairies had a series of partnership and knowledge agreements with the Danone Group.[32]

In 2001, Danone acquired a 5% stake in Bright Dairy and, in March 2005, doubled its shareholding,[33] and again, to 20%, in April 2006, becoming the third largest shareholder after Shanghai Milk Group and S.I. Food, each holding 25.17%.[34] Danone and Bright set up a 50–50 yoghurt joint venture in 1992. Danone licensed Bright Dairy to produce and market products inside China using Danone brands. The joint venture underwent a stake-diversification reshuffle and went public in 2000.[35]

Shortly after increasing its stake, Danone's plans were upset when the Shanghai government announced it was to consolidate the city's food and beverages market by merging Shanghai Bright Dairy Group, the holding company for Bright Dairy, with Shanghai Sugar Tobacco Wine Co., Shanghai Agriculture Industry and Commerce Group and Jinjiang Food. The new conglomerate, named Bright Foods, would be managed by the Shanghai local administration and the State-owned Assets Supervision and Administration Commission.[34]

The parties announced in October 2007 that Danone would divest its stake by selling it to the other two main shareholders at a small profit.[35] Bright Dairy said Danone would pay 330m yuan (€31m) to terminate the existing distribution and production agreement with it.[36]

The Hangzhou Wahaha Group, the largest beverage producer in China,[37] and Danone entered into a dairy products joint venture in 1996, in which Danone held 51%. It was hailed by Forbes magazine as a "showcase" joint venture.[38]

As the businesses expanded and became more complex, Danone made several attempts to take a stake in the Wahaha companies external to the joint venture, but was rebuffed by Wahaha's General Manager Zong Qinghou.[39] Danone and Zong Qinghou had signed a deal in December 2006 allowing Danone to buy a majority stake in these non-JV operations. However, Zong had second thoughts about the deal and reneged, claiming the offer was underpriced and held out for a higher price from Danone.[40]

The dispute took on the shape of a trademark dispute, and Danone filed for arbitration in Stockholm on 9 May 2007.[35] On 4 June,[41] Danone filed suit in Los Angeles Superior Court against Ever Maple Trading and Hangzhou Hongsheng Beverage Co Ltd, companies controlled by Zong, his wife, and daughter.[42]

"TRUST" is an international business game organised by Groupe Danone and its subsidiaries. The business game is a way to for Danone to identify and recruit possible future employees, that fit the companies values and way of doing business and furthermore enables Danone to improve its “employer image”. Students participating in the game have to deal with different aspects of the business life whilst running a strategy of a fictive Danone company, on both business and sustainable development aspects. Problem solving skills, analytical skills and resourcefulness are all put to test.

The Danone International Prize for Nutrition is an award established in 1997 and presented every two years to honour individuals or teams that have advanced the science of human nutrition.

It is promoted by the Danone Institute International and offers a prize of €120,000.