The total number of seats on the Council after the election was:

The Oxford University Conservative Association President-Elect was the Conservative candidate in the Holywell ward. His candidacy was embroiled in controversy in late April when some of his nominators alleged that they had not signed his nomination forms, thus meaning that their signatures had been forged. An investigation was launched by Police and, as of 24 May, is still ongoing.

Several local and student newspapers launched their own investigations. The full list of Steel's supposed nominators were a seletion of students of the University of Oxford, some of whom were officers of the Oxford University Conservative Association (OUCA). A number of those officers subsequently complained to Oxford City Council that they had not signed the papers. 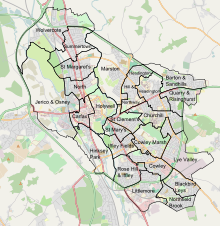 Map of the Oxford Wards

Because both seats were up for election each voter had two votes (i.e. plurality-at-large voting). Turnout has been estimated by halving the number of votes cast.