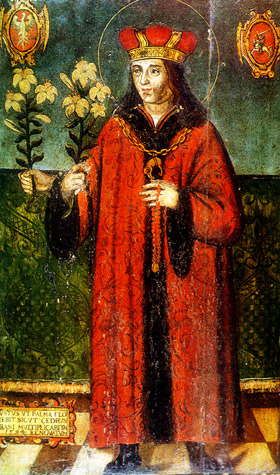 Saint Casimir Jagiellon ( - , ), of , was dynast of Lithuanian throne of and possible candidate to Polish kings.

St. Casimir ( _lt. Kazimieras, _pl. Kazimierz, _be. Kazimir) was the grandson of and was the second son of and later king of Poland Casimir IV and Queen . His grandfather was Albert II Habsburg, king of , king of , and "" in the .

From the age of nine, St. Casimir received his education from Fr. and Filippo Buonaccorsi (also known as ). When Casimir was thirteen he was offered the throne of by factions discontented with king . Casimir, who was eager to defend the Cross against the Turks, accepted the call and went to Hungary to receive the crown. His uncle Władysław III, king of Poland and Hungary, had earlier been killed in battle at in 1444. Casimir was unsuccessful in his undertaking and returned as a fugitive. He again became the pupil of Fr. Długosz in 1475. His father, King Casimir IV, had initiated him well into public affairs and when his brother Władysław, ascended to the Bohemian throne, Casimir became heir-apparent to the throne of Poland. In 1479, the king went to Lithuania for five years, and Casimir was left in charge of Poland. From 1481-1483 he administered the state with great prudence and justice. His father tried to arrange a marriage with a daughter of Emperor Frederick III, but Casimir preferred to remain single. Due to his devout faith and weakened by excessive fasting, he developed severe lung problems, possibly , which he proved unable to fight off. On a journey to Lithuania in 1484, he died at , . His remains were interred in , [Lithuania] . There is a Chapel of Saint Casimir in where his remains rest.

St. Casimir lived and reigned with great dignity and possessed great charm and character. Several miracles are ascribed to him. He was by in 1522 and is the of several countries, principally of Poland, which has claimed St. Casimir as their special patron for centuries.

To a much lesser extent he is also a patron saint of Lithuania.

On , named Saint Casimir the special patron of all youth.

* in , a fair held on the Sunday nearest to St. Casimir's Day, the anniversary of his death
* Saint Casimir's Day (his feast day, March 4)