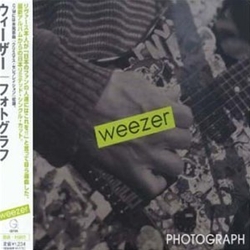 "Photograph" is the third and final single from 's self-titled "third album". "Photograph" was actually released as the first single off the album in Japan instead of "Hash Pipe." The song enjoyed only modest success on the radio, peaking at #17 on Billboard's chart.

The for the song is notable for being directed by Weezer.com webmaster and longtime friend of the band Karl Koch. It consists of footage shot while the band was touring for "The Green Album". Among the notable footage is playing soccer, Brian Bell attempting to skateboard and juggle (not at the same time), riding a Razor Scooter, a brief clip of the duo from running onstage during a Weezer show and a scene with Rivers playing a prank on new bassist . Interestingly enough, although plays bass and sings backup vocals on the studio recording, Shriner is in the video, as Welsh had left the band at that point. During the very end of the video, when Cuomo is playing the prank on Shriner, a demo of "Death & Destruction" can be heard in the background. This song would later surface on the band's next album "". The video is featured on , the band's DVD.

During many live shows in , the band would close out their first set by having Weezer drummer Patrick Wilson take lead vocals and guitar on "Photograph" while Rivers played drums.

The song was also played over the end credits for the 2008 comedy film, .