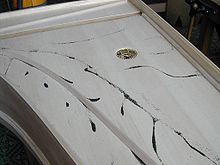 Resonance made visible with black seeds on a harpsichord soundboard 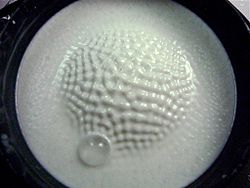 Cornstarch and water solution under the influence of sine wave vibration

Cymatics (from Greek: κῦμα "wave") is the study of visible sound and vibration, a subset of modal phenomena. Typically the surface of a plate, diaphragm, or membrane is vibrated, and regions of maximum and minimum displacement are made visible in a thin coating of particles, paste, or liquid.[1] Different patterns emerge in the exitatory medium depending on the geometry of the plate and the driving frequency.

The apparatus employed can be simple, such as a Chladni Plate[2] or advanced such as the CymaScope, a laboratory instrument that makes visible the inherent geometries within sound and music.[clarification needed]

The generic term for this field of science is the study of modal phenomena, retitled Cymatics by Hans Jenny, a Swiss medical doctor and a pioneer in this field. The word Cymatics derives from the Greek 'kuma' meaning 'billow' or 'wave,' to describe the periodic effects that sound and vibration have on matter.

The study of the patterns produced by vibrating bodies has a venerable history. One of the earliest to record that an oscillating body displayed regular patterns was Galileo Galilei. In Dialogue Concerning the Two Chief World Systems (1632), he wrote:

As I was scraping a brass plate with a sharp iron chisel in order to remove some spots from it and was running the chisel rather rapidly over it, I once or twice, during many strokes, heard the plate emit a rather strong and clear whistling sound: on looking at the plate more carefully, I noticed a long row of fine streaks parallel and equidistant from one another. Scraping with the chisel over and over again, I noticed that it was only when the plate emitted this hissing noise that any marks were left upon it; when the scraping was not accompanied by this sibilant note there was not the least trace of such marks.[3]

In 1787, Ernst Chladni repeated the work of Robert Hooke and published "Entdeckungen über die Theorie des Klanges" ("Discoveries in the Theory of Sound"). In this book, Chladni describes the patterns seen by placing sand on metal plates which are made to vibrate by stroking the edge of the plate with a bow.

Cymatics was explored by Hans Jenny in his 1967 book, Kymatik (translated Cymatics).[6] Inspired by systems theory and the work of Ernst Chladni, Jenny began an investigation of periodic phenomena but especially the visual display of sound. He used standing waves, piezoelectric amplifiers, and other methods and materials.

Hans Jenny's book influenced Alvin Lucier and, along with Chladni, helped lead to Lucier's composition Queen of the South. Jenny's work was also followed up by Center for Advanced Visual Studies (CAVS) founder György Kepes at MIT.[7] His work in this area included an acoustically vibrated piece of sheet metal in which small holes had been drilled in a grid. Small flames of gas burned through these holes and thermodynamic patterns were made visible by this setup.

Rosslyn Chapel's carvings are thought to contain references to Cymatics patterns and in 2005 composer Stuart Mitchell and his father T.J.Mitchell created a work realised by the use of matching Cymatics/Chladni patterns to the 13 geometric symbols carved onto the faces of 213 cubes emanating from 14 arches. They have named the completed work The Rosslyn Motet and has received a great deal of media publicity and acclaim from scientific and musicological sources[8] .