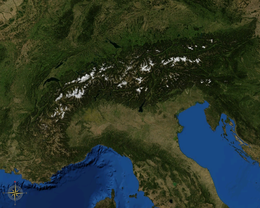 The Alps (German: Alpen; Italian: Alpi; French: Alpes; Greek: Αλπεις, translit. Alpeis; Occitan: Aups/Alps; Romansh: Alps; Slovene: Alpe) is one of the great mountain range systems of Europe, stretching from Austria and Slovenia in the east through Italy, Switzerland, Liechtenstein and Germany to France in the west.

The highest mountain in the Alps is Mont Blanc, at 4,810.45 metres (15,782 ft),[1] on the Italian–French border. All the main peaks of the Alps can be found in the list of mountains of the Alps and list of Alpine peaks by prominence.

The English name Alps was taken via French from Latin Alpes, which formerly was believed to be ultimately cognate with Latin albus ("white"). Few scholars share this opinion today. The German Albe, Alpe or Alp (f., Old High German alpâ, plural alpûn), the Occitan Alp/Aup[2] and the French Alpage or Alpe in the singular mean "alpine pasture", and only in the plural may also refer to the mountain range as a whole.[3]

Main article: Geography of the Alps

The Eastern Alps is commonly subdivided according to the different lithology (rock composition) of the more central parts of the Alps and the groups at its northern and southern fringes:

The Western Alps is commonly subdivided with respect to geography:

Series of lower mountain ranges run parallel to the main chain of the Alps, including the French Prealps in France, the Jura Mountains in Switzerland and France[5]. (See Alpine geography.)

The geologic subdivision is different and makes no difference between the Western and Eastern Alps: the Helveticum in the north, the Penninicum and Austroalpine system in the center and, south of the Periadriatic Seam, the Southern Alpine system and parts of the Dinarides (see Alpine geology). Geographically, the Jura Mountains do not belong to the Alps; geologically, however, they do[5].

The watershed between Italy and Switzerland (View from Tête Blanche, Pennine Alps)

The secondary chain of the Alps follows the watershed from the Mediterranean Sea to the Wienerwald, passing over many of the highest and most famous peaks in the Alps. From the Colle di Cadibona to Col de Tende it runs westwards, before turning to the northwest and then, near the Colle della Maddalena, to the north. Upon reaching the Swiss border, the line of the main chain heads approximately east-northeast, a heading it follows until its end near Vienna.

The Alps does not form an impassable barrier; It has been traversed for war and commerce, and later by pilgrims, students and tourists. Crossing places by road, train or foot are called passes. These are depressions in the mountains into which a valley leads from the plains and hilly pre-mountainous zones.

The Union Internationale des Associations d'Alpinisme (UIAA) has defined a list of 82 "official" Alpine 4,000-metre (13,123 ft) summits. The list contains many subpeaks with little prominence, but important for mountaineering. Here are the twelve four-thousanders with at least 1,000 metres (3,281 ft) of prominence.

The Alps at Lindau heading south.

Karl Blodig was the first person to climb all the major four-thousand metre peaks, circa 1900.

Main articles: Geology of the Alps and Alpine orogeny

The Alps form a part of a Tertiary orogenic belt of mountain chains, called the Alpide belt, that stretches through southern Europe and Asia from the Atlantic all the way to the Himalayas. This belt of mountain chains was formed during the Alpine orogeny. A gap in these mountain chains in central Europe separates the Alps from the Carpathians off to the east. Orogeny took place continuously and tectonic subsidence is to blame for the gaps in between. 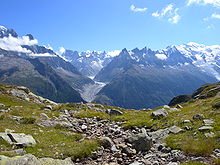 The cristalline basement of the Mont Blanc Massif

The Alps arose as a result of the collision of the African and European tectonic plates, in which the western part of the Tethys Ocean, which was formerly in between these continents, disappeared. Enormous stress was exerted on sediments of the Tethys Ocean basin and its Mesozoic and early Cenozoic strata were pushed against the stable Eurasian landmass by the northward-moving African landmass. Most of this occurred during the Oligocene and Miocene epochs. The pressure formed great recumbent folds, or nappes, that rose out of what had become the Tethys Sea and pushed northward, often breaking and sliding one over the other to form gigantic thrust faults. Crystalline basement rocks, which are exposed in the higher central regions, are the rocks forming Mont Blanc, the Matterhorn, and high peaks in the Pennine Alps and Hohe Tauern.

The formation of the Mediterranean Sea is a more recent development, and does not mark the northern shore of the African landmass.

Main articles: Climate of the Alps and High Alps

The Alps is split into five climate zones, each with a different kind of environment. The climate, plant life and animal life vary on different sections or zones of the mountain. 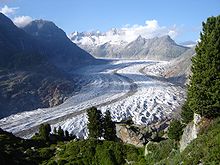 The Alps is a classic example of what happens when a temperate area at lower altitude gives way to higher-elevation terrain. Elevations around the world which have cold climates similar to those found in polar areas have been called Alpine. A rise from sea level into the upper regions of the atmosphere causes the temperature to decrease (see adiabatic lapse rate). The effect of mountain chains on prevailing winds is to carry warm air belonging to the lower region into an upper zone, where it expands in volume at the cost of a proportionate loss of heat, often accompanied by the precipitation in the form of snow or rain.

Main article: History of the Alps 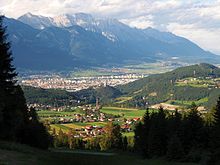 The Inn valley at Innsbruck, Tyrol

Little is known of the early dwellers of the Alps, save from scanty accounts preserved by Roman and Greek historians and geographers. A few details have come down to us of the conquest of many of the Alpine tribes by Augustus. Also, recent research into Mitochondrial DNA indicates that MtDNA Haplogroup K very likely originated in or near the southeastern Alps approximately 12–15,000 years ago.

During the Second Punic War in 218 BC, the Carthaginian general Hannibal successfully crossed the Alps along with an army numbering 38,000 infantry, 8,000 cavalry, and 37 war elephants.[6] This was one of the most celebrated achievements of any military force in ancient warfare.[6] 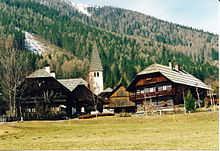 St. Oswald in Bad Kleinkirchheim, a small village in the Central Eastern Alps

Much of the Alpine region was gradually settled by Germanic tribes (Lombards, Alemanni, Bavarii) from the 6th to the 13th centuries, the latest expansion corresponding to the Walser migrations.

Not until after the final breakup of the Carolingian Empire in the 10th and 11th century can the local history of the Alps be traced out.

The higher regions of the Alps were long left to the exclusive attention of the people of the adjoining valleys even when Alpine travellers (as distinguished from Alpine climbers) began to visit these valleys. The two men who first explored the regions of ice and snow were H.B. de Saussure (1740–1799) in the Pennine Alps and the Benedictine monk of Disentis Placidus a Spescha (1752–1833), most of whose ascents were made before 1806 in the valleys at the sources of the Rhine.

The Alps are popular both in summer and in winter as a destination for sightseeing and sports. Winter sports (Alpine and Nordic skiing, snowboarding, tobogganing, snowshoeing, ski tours) can be practised in most regions from December to April. In summer, the Alps are popular with hikers, mountain bikers, paragliders, and mountaineers, while many alpine lakes attract swimmers, sailors and surfers. The Alps are usually prominently featured in the three-week road bicycling race le Tour de France, held annually in July. The lower regions and larger towns of the Alps are well served by motorways and main roads, but higher passes and by-roads can be treacherous even in summer. Many passes are closed in winter. A multitude of airports around the Alps (and some within), as well as long-distance rail links from all neighbouring countries, afford large numbers of travellers easy access from abroad. The Alps typically see more than 50 million visitors a year.

Main article: Flora of the Alps

A natural vegetation limit with altitude is given by the presence of the chief deciduous trees—oak, beech, ash and sycamore maple. These do not reach exactly to the same elevation, nor are they often found growing together; but their upper limit corresponds accurately enough to the change from a temperate to a colder climate that is further proved by a change in the presence of wild herbaceous vegetation. This limit usually lies about 1,200 metres (3,940 ft) above the sea on the north side of the Alps, but on the southern slopes it often rises to 1,500 metres (4,920 ft), sometimes even to 1,700 metres (5,580 ft).

This region is not always marked by the presence of the characteristic trees. Human interference has nearly exterminated them in many areas, and, except for the beech forests of the Austrian Alps, forests of deciduous trees are rarely found. In many districts where such woods once existed, they have been replaced by the Scots pine and Norway spruce, which are less sensitive to the ravages of goats who are the worst enemies of such trees.

Above the forestry, there is often a band of short pine trees (Pinus mugo), which is in turn superseded by dwarf shrubs, typically Rhododendron ferrugineum (on acid soils) or Rhododendron hirsutum (on alkaline soils). Above this is the alpine meadow, and even higher, the vegetation becomes more and more sparse. At these higher altitudes, the plants tend to form isolated cushions. In the Alps, several species of flowering plants have been recorded above 4,000 metres (13,120 ft), including Ranunculus glacialis, Androsace alpina and Saxifraga biflora.

Species common to the Alps.