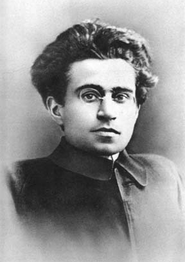 Cultural hegemony is the philosophic and sociological theory, by the Marxist philosopher Antonio Gramsci, that a culturally diverse society can be dominated (ruled) by one social class, by manipulating the societal culture (beliefs, explanations, perceptions, values) so that its ruling-class worldview is imposed as the societal norm, which then is perceived as a universally valid ideology and status quo beneficial to all of society, whilst benefiting only the ruling class.[1][2]

The philosophic and sociologic term cultural hegemony derives from the Greek word hegemony (leadership, rule) denoting the indirect imperial dominance with which the hegemon (leader state) rules sub-ordinate states, by the implied means of power, rather than direct military force.[3] In Ancient Greece (8th c. BC – AD 6th c.), hegemony denoted the politico–military dominance of a city-state upon other city-states.[4] In the 19th century, hegemony (rule) denoted the predominance of one country upon others.[5] In the 20th century, political science extended the denotation of hegemony (dominance) as a theoretic concept central to cultural hegemony, a Marxist explanation of how, by the manipulation of the societal culture (value system), one social class dominates the other social classes of a society, with a world view justifying the status quo.[4][6][7][8]

In 1848, Karl Marx proposed that the economic recessions and practical contradictions of a capitalist economy would provoke the working class to proletarian revolution, depose capitalism, restructure societal institutions (economic, political, social) per rational, socialist models, and thus begin the transition to a communist society. Therefore, the dialectical changes to the functioning of the economy of a society determine its social superstructures (culture and politics), and the composition of its economic and social classes. To that end, Antonio Gramsci proposed a strategic distinction, between a War of Position and a War of Manoeuvre. The war of position is an intellectual and cultural struggle wherein the anti-capitalist revolutionary creates a proletarian culture whose native value system counters the cultural hegemony of the bourgeoisie. The proletarian culture will increase class consciousness, teach revolutionary theory and historical analysis, and thus propitiate further revolutionary organisation among the social classes. On winning the war of position, socialist leaders would then have the necessary political power and popular support to begin the political manoeuvre warfare of revolutionary socialism.

The initial theoretic application of cultural domination was as an economic class analysis, which Gramsci developed to comprehend social class. Hence, cultural hegemony proposes that the prevailing cultural norms of society, imposed by the ruling class (bourgeois hegemony), must not be perceived as natural and inevitable, but must be recognized as artificial social constructs (institutions, practices, beliefs) that must be investigated to discover their roots as social class domination; from which knowledge follows societal liberation.

In a society, the praxis of cultural hegemony is neither monolithic nor a unified value system, rather it is a complex of layered social structures; each social and economic class has a societal purpose and an internal class logic allowing its members to behave in a particular way that is different from the behaviour of members of other social classes, whilst co-existing with them as constituents of the society. Because of their different social purposes, the classes will be able to coalesce into a society with a greater social mission. In a person perceiving the social structures of cultural hegemony, personal common sense has a dual structural role (personal and public). Personally, men and women apply common sense to cope with daily life, and to explain (to themselves) the small segment of the social order they experience as life. Publicly, the perceptual limitations of common sense emerge and inhibit individual perception of the greater nature of the systematic socio-economic exploitation made possible by cultural hegemony. Because of the discrepancy in perceiving the status quo (bourgeois hierarchy), most people attend to their immediate (personal) concerns, rather than (publicly) think about and question the fundamental sources of their social and economic oppression.[9]

At the personal level, cultural hegemony is perceptible; although each man and woman in a society lives a meaningful life in his or her social class, to him or her, the discrete classes might appear to have little in common with individual private life. Yet, when perceived as a whole society, the life of each person does contribute to the greater societal hegemony. Although social diversity, economic variety, and political freedom appear to exist — because most people “see” different life circumstances — they are incapable of perceiving the greater hegemonic pattern created when the lives they witness coalesce as “a society”. The cultural hegemony is manifest in and maintained by an existence of minor, different circumstances, that are not always fully perceived by the people living it.[10]

Cultural hegemony has deeply influenced Eurocommunism, the social sciences, and liberal and progressive activist politics. In the social sciences, its analytic application of discourse (e.g. those posited by Michel Foucault) is important in anthropology, political science, sociology, and cultural studies. Moreover, in the field of education, cultural hegemony led to the development of critical pedagogy.

In 1967, the German student movement leader Rudi Dutschke reformulated Gramsci’s philosophy of cultural hegemony with the phrase "Der lange Marsch durch die Institutionen“ (The long march through the institutions), denoting the war of position, in allusion to the Long March (1934–35) of the Communist Chinese People's Liberation Army.[11][12][13]