Mount Adams is a potentially active[6] stratovolcano in the Cascade Range and the second-highest mountain in the U.S. state of Washington.[7] Adams is a member of the Cascade Volcanic Arc, and is one of the arc's largest volcanoes,[8] located in a remote wilderness approximately 31 miles (50 km) east of Mount St. Helens.[9] The Mount Adams Wilderness comprises the upper and western part of the volcano's cone. The eastern side of the mountain is part of the Yakama Nation.[10]

Adams' asymmetrical and broad body rises 1.5 miles (2.4 km) above the Cascade crest. Its nearly flat summit was formed as a result of cone-building eruptions from separated vents. Air travelers flying the busy routes above the area sometimes confuse Mount Adams with nearby Mount Rainier, which has a similar flat-topped shape.

The Pacific Crest Trail traverses the western flank of the mountain.[11][12] Although Adams has not erupted in over 1,400 years, it is not considered extinct. 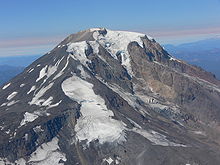 Contrary to legend, the flatness of Adams' current summit area is not due to the loss of the volcano's peak. Instead it was formed as a result of cone-building eruptions from separated vents. A false summit rises 11,500 feet (3,510 m) on the south side of the nearly half-mile (800 m) wide summit area. The true summit is about 800 feet (240 m) higher on the gently sloping north side. A small lava cone marks the highest point. Suksdorf Ridge is a long buttress trending from the false summit down to an elevation of 8,000 feet (2,440 m). This structure was built by repeated lava flows in the late Pleistocene. The Pinnacle forms the northwest false summit and was created by erosion from Adams and White Salmon glaciers. The summit crater is filled with snow and is open on its west rim.[8] 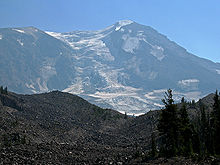 Adams Glacier as seen from the Pacific Crest Trail

Ice, mostly in the form of glaciers, covers about 6.2 square miles (16.1 km2) of the mountain's upper cone. Water from melting ice and rain slowly percolates through the very porous interior of the main cone and flows out through springs near the base of the volcano.

Glaciers cover a total of 2.5% of Adams' surface but during the last ice age about 90% of the mountain was glaciated. Most of the largest remaining glaciers (including the Adams, Klickitat, Lyman, and White Salmon) originate from Adams' summit ice cap. On the northwest face of the mountain, Adams Glacier cascades down a steep channel in a series of icefalls before spreading out and terminating at around the 7,000 feet (2,100 m). Klickitat Glacier on the volcano's eastern flank originates in a 1 mile (1.6 km) wide cirque and is fed by two smaller glaciers from the summit ice cap. It terminates around 6,000 feet (1,800 m). In the Cascades, Adams Glacier is second in size only to Carbon Glacier on Mount Rainier.[13] 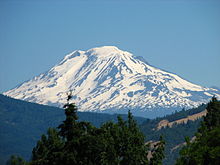 Mount Adams is surrounded by a variety of other volcanic features and volcanoes. The largest flank volcano is a basaltic shield volcano on Adams east base called Goat Butte. This structure is at least 150,000 years old.

Little Mount Adams is a symmetrical cinder cone on top of the Ridge of Wonders on Adams' southeast flank.[15] Potato Hill is a cinder cone on Adams' north side that was created in the late Pleistocene and stands 800 feet (240 m) above its lava plain.[16] Lavas from its base flowed into the Cispus Valley where they were later modified by glaciers. At the 7,500 feet (2,300 m) level on Adams' south flank is South Butte. The lavas associated with this structure are all younger than Suksdorf Ridge but were emplaced before the end of the ice age.[16]

Located a few miles north of Adams is Goat Rocks Wilderness and the heavily eroded ruins of a stratovolcano that is much older than Adams. Unlike Adams, the Goat Rocks volcano was periodically explosive and deposited ash 2.5 million years ago that later solidified into 2,100 feet (640 m) thick tuff layers.[17]

In the area surrounding Mount Adams, many underground caves have formed around inactive lava vents. These caves are usually close to the surface and can be hundreds of feet deep and wide.[18]

The Highline trail encircles Mount Adams and is approximately 35 miles (56 km) long.[19] The trail is also known as the "Around the Mountain" trail. An 8-mile (13 km) section of the trail is on the Yakama Indian Reservation, which requires special permits.[19] Part of the Highline trail is coincident with the Pacific Crest Trail.

Adams is made of several overlapping cones that together form an 18-mile (29 km) diameter base which is elongated in its north-south axis and covers an area of 250 square miles (650 km2). The volcano has a volume of 85 cubic miles (350 km3) placing it second only to Mount Shasta in that category among the Cascade stratovolcanoes.[8] Mount Adams was probably created by the subduction of the Juan de Fuca plate, which is located just off the coast of the Pacific Northwest.

Mount Adams was born in the relatively late Pleistocene and grew in several pulses of mostly lava-extruding eruptions. Each eruptive cycle was separated from one another by long periods of dormancy during which glaciers eroded the mountain to below 9,000 feet (2,700 m). Potassium-argon dating has identified two such eruptive periods; the first occurring 275,000 to 200,000 years ago and the second 150,000 to 100,000 years ago. Most of these eruptions and therefore most of the volcano, consist of lava flows with little tephra. The loose material that makes up much of Adams' core is made of brecciated lava.[8] 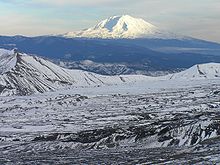 Andesite and basalt flows formed a 20 to 200 feet (6 to 60 m) thick circle around the base of the Mount Adams, and filled existing depressions and ponded in valleys. Most of the volcano is made of andesite together with handful of dacite and pyroclastic flows which erupted early in Adams' development. The present main cone was built when Adams was capped by a glacier system in the last ice age. The lava that erupted was shattered when it came in contact with the ice and the cone interior is therefore made of easily eroded andesite fragments. Since its construction, constant emissions of heat and caustic gases have transformed much of the rock into clays (mostly kaolinite), iron oxides, sulfur-rich compounds and quartz.[20]

The Trout Lake Mudflow is the youngest large debris flow from Adams and the only large one since the end of the last Ice Age. The flow dammed Trout Creek and covered 25 miles (40 km) of the White Salmon River valley. Impounded water later formed Trout Lake. The Great Slide of 1921 started close to the headwall of the White Salmon Glacier and was the largest avalanche on Adams in historic time. The slide fell about 1 mile (1.6 km) and its debris covered about 1 square mile (2.6 km2) of the upper Salt Creek area. Steam vents were reported active at the slide source for three years, leading to speculation that the event was started with a small steam explosion.[20] This was the only debris flow in Mount Adam's recorded history, but there are five known lahars.[21]

Since then, thermal anomalies (hot spots) and gas emissions (including hydrogen sulfide) have occurred especially on the summit plateau. This indicates that Adams is dormant, not extinct. It still has the potential to become active. Future eruptions from Adams will probably follow patterns set by previous events and will thus be flank lava flows of andesite or basalt. Since the interior of the main cone is little more than a pile of fragmented lava and hydrothermally-altered rock, there is a potential for very large landslides and other debris flows.[20]

The Indian Heaven volcanic field is located between St. Helens and Adams. Its principal feature are an 18 miles (30 km) long linear zone of shield volcanoes, cinder cones, and flows with volumes of up to 23 cubic miles (100 km3). The shield volcanoes, which form the backbone of the volcanic field, are located on the northern and southern sides of the field. Mount St. Helens and Mount Adams are on the western and the eastern sides.[13] 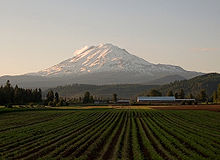 Native Americans in the area have composed many legends concerning the three "smoking mountains" that guard the Columbia River. According to the Bridge of the Gods tale, Wy'east (Mount Hood) and Pahto (Mount Adams; also called Paddo or Klickitat by native peoples) were the sons of the Great Spirit. The brothers both competed for the love of the beautiful La-wa-la-clough (Mount St. Helens). When La-wa-la-clough chose Pahto, Wy'east struck his brother hard so that Pahto's head was flattened and Wy'east took La-wa-la-clough from him (thus attempting to explain Adams' squat appearance). Other versions of the story state that losing La-wa-la-clough caused Pahto such grief that he dropped his head in shame.[22][23][24]

In 1805 the Lewis and Clark Expedition recorded seeing the mountain. They misidentified it as Mount St. Helens which had been previously discovered and named. This is the earliest recorded sighting of the volcano by European explorers.[25]

Between 1830 and 1834 Hall J. Kelley led a campaign to rename the Cascade Range as the President's Range and also to rename each major Cascade mountain after a former President of the United States. Mount Adams was not known to Kelley and was thus not in his plan. Mount Hood, in fact, was designated by Kelley to be renamed after President John Adams but a mistake by a mapmaker placed the Mount Adams name north of Mount Hood and about 40 miles (60 km) east of Mount St. Helens. By sheer coincidence there was in fact a large mountain there to receive the name. Since the mountain had no official name at the time, Kelley's name stuck even though the rest of his plan failed.[26] In 1901, local settler and mountaineer C. E. Rusk led noted glaciologist Harry Reid to Adams' remote location. Reid conducted the first systematic study of the volcano and also named its most significant glaciers.[27]

In 1929 and 1931 Wade Dean filed mining claims to the sulfur on Adams' 210-acre (0.8 km2) summit plateau. After building a horse and mule trail, he had a diamond-tipped drilling machine moved to the summit area and test pits were drilled. Although sulfur sludge was found, the amount and quality of the ore was never good enough to make the venture profitable and the project was abandoned in 1959. Adams is the only large Cascade volcano to have its summit exploited by commercial miners.[21] 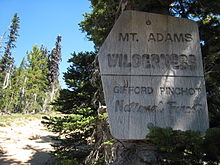 Sign at the edge of the wilderness
Main article: Mount Adams Wilderness

The western side of Mount Adams is in the Mount Adams Wilderness within the Gifford Pinchot National Forest. The east side is part of the Yakama Nation. The wilderness is open to hiking, backpacking, mountain climbing and equestrian sports. A Volcano Pass from the United States Forest Service (USFS) is required for activities above a certain altitude.[28] Some areas of the Yakama Nation are open for recreation, while other areas are open only to members of the tribe.[10]

On the slopes of the mountain, elk are common and wolverines have been sighted.[30]