Marquess of Huntly (also spelt Marquis) (Scottish Gaelic: Coileach Strath Bhalgaidh) is a title in the Peerage of Scotland created on 17 April 1599 for George Gordon, 6th Earl of Huntly. It is the oldest existing marquessate in Scotland, and the second-oldest in the British Isles, only the English marquessate of Winchester being older. The Marquess holds the following subsidiary titles: Lord Gordon of Strathaven and Glenlivet and Earl of Aboyne (1660; Peerage of Scotland), and Baron Meldrum, of Morven in the County of Aberdeen (1815; Peerage of the United Kingdom)[1]

The Gordon family descends from Sir Adam Gordon of Huntly, killed at the Battle of Humbleton Hill in 1402 and succeeded in his estates by his daughter Elizabeth, wife of Alexander Seton whose son Alexander assumed the surname of Gordon in lieu of Seton. He was created Earl of Huntly in the Peerage of Scotland in 1445 and succeeded by his son, the second Earl, who served as Lord Chancellor of Scotland from 1498 to 1501. His younger son the Hon. Adam Gordon married Elizabeth, suo jure Countess of Sutherland. Their grandson John Gordon succeeded his grandmother in the earldom in 1535 (see the Earl of Sutherland for further history of this branch of the family).

Lord Huntly's elder son, the third Earl, was a member of the Council of Regency in 1517. He was succeeded by his grandson, the fourth Earl, Lord Chancellor of Scotland from 1546 to 1562, who was killed in the latter year, and in 1563 an Act of Attainder was passed through Parliament with all his titles forfeited. His eldest surviving son, George Gordon, was condemned to death for treason in 1563 but later pardoned. He obtained a reversal of his father's attainder in 1567 and served as Lord Chancellor of Scotland.

George Gordon was succeeded by his son, the aforementioned sixth Earl, who was several times engaged in rebellion against the king and had his titles forfeited in 1593. He was restored to his titles in 1597. In 1599 King James VI created him Lord Gordon of Badenoch, Earl of Enzie and Marquess of Huntly in the Peerage of Scotland. He was succeeded by his elder son, the second Marquess.

In 1632, four years before his father's death, the sixth Earl was created Viscount Aboyne in the Peerage of Scotland in his own right, with remainder that the title should be passed on to his second son the Hon. James Gordon on his death or on the death of his father, whichever came first. Lord Huntly was a supporter of King Charles I during the Civil War and was beheaded by the Parliamentarians in 1649, with his titles forfeited. His fourth son Lord Charles Gordon was created Earl of Aboyne in 1660. On Huntly's succession to the marquessate in 1636 he was succeeded in the viscountcy of Aboyne according to the special remainder by his second son the Hon. James (see the Viscount Aboyne for further history of this title). On Lord Huntly's death in 1649 his remaining titles passed to his eldest son, the third Marquess. He was granted a remission of his father's attainder by the exiled King Charles II in 1651.

When he died two years later the titles passed to his son, the fourth Marquess. In 1661 the attainder of 1649 was revoked by Act of Parliament. In 1684 Lord Huntly was created Lord Badenoch, Lochaber, Strathavon, Balmore, Auchindoun, Garthie and Kincardine, Viscount of Inverness, Earl of Huntly and Enzie and Duke of Gordon. All four titles were in the Peerage of Scotland. He was succeeded by his son, the second Duke. He was a supporter of the Old Pretender. Gordon married Lady Henrietta, daughter of Charles Mordaunt, 3rd Earl of Peterborough and 8th Baron Mordaunt. Their eldest son, the third Duke, sat in the House of Lords as a Scottish Representative Peer from 1747 to 1752. He was succeeded by his eldest son, the fourth Duke. Known as "Cock o' the North", he was a Scottish Representative Peer from 1767 to 1784 and served as Lord-Lieutenant of Aberdeenshire and as Keeper of the Great Seal of Scotland. In 1784 he was created Baron Gordon of Huntley, in the County of Gloucester, and Earl of Norwich, in the County of Norfolk, in the Peerage of Great Britain. Gordon's great-grandfather, the first Duke, was the husband of Lady Elizabeth Howard, daughter of Lord Henry Howard, who had been created Baron Howard of Castle Rising in 1669 and Earl of Norwich in 1672. The earldom of Norwich had become extinct on the death of the fourth Earl (also the ninth Duke of Norfolk) in 1777 and was now revived in Gordon's favour. In 1819 Gordon also inherited the barony of Mordaunt through his grandmother.

His son, the fifth Duke, was a General in the Army and served as Lord-Lieutenant of Aberdeenshire and as Keeper of the Great Seal of Scotland. In 1807 he was summoned to the House of Lords through a writ of acceleration in his father's junior title of Baron Gordon of Huntley. Gordon died without legitimate issue in 1836 when the dukedom and remaining titles created in 1684 as well as the titles created in 1784 became extinct. The barony of Mordaunt fell into abeyance between his sisters. Gordon's eldest sister, Lady Charlotte Gordon, married Charles Lennox, 4th Duke of Richmond. Their son Charles Gordon-Lennox, 5th Duke of Richmond, inherited much of the Gordon estates and assumed the additional surname of Gordon. In 1875 the dukedom of Gordon was revived when his son Charles Henry Gordon-Lennox, 6th Duke of Richmond, was made Duke of Gordon in the Peerage of the United Kingdom (see the Duke of Richmond for further history of these titles). The Duke of Gordon was succeeded in the marquessate of Huntly by his kinsman George Gordon, 5th Earl of Aboyne, who became the ninth Marquess (see the Earl of Aboyne for earlier history of this branch of the family). However, the House of Lords did not allow his claims to the lordship of Gordon of Badenoch and earldom of Enzie (although they had been created at the same time as the marquessate) while his claim to the ancient earldom of Huntly was also overlooked. Lord Huntly, who also held the subsidiary title of Lord Gordon of Strahaven and Glenlivet, had earlier been a Scottish Representative Peer from 1796 to 1807. In 1815 he had been created Baron Meldrum, of Morven in the County of Aberdeen, in the Peerage of the United Kingdom. 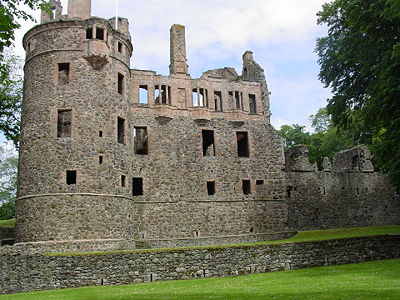 Huntly Castle, the former seat of the Marquesses of Huntly

He was succeeded by his son, the tenth Marquess. He represented East Grinstead and Huntingdonshire in the House of Commons and served as Lord-Lieutenant of Aberdeenshire. His eldest son, the eleventh Marquess, was a Liberal politician and served briefly under William Ewart Gladstone as Captain of the Honourable Corps of Gentlemen-at-Arms in 1881. He was succeeded by his great-nephew, the twelfth Marquess. He was the son of Lieutenant-Colonel (Granville Cecil) Douglas Gordon (1883–1930), son of Granville Armyn Gordon (1856–1907), sixth son of the tenth Marquess. As of 2010[update] the titles are held by the twelfth Marquess' son, Granville Charles Gomer Gordon, 13th Marquess of Huntly, 9th Earl of Aboyne, 9th Lord Gordon of Strathavon and Glenlivet and 5th Baron Meldrum, who succeeded in 1987. He is Chief of Clan Gordon.

The heir apparent is the present holder's eldest son Alastair Gordon, Earl of Aboyne (b. 1973).

Lord Aboyne's heir apparent is his only son Cosmo Gordon, Lord Strathavon (b 2009).