Essentially, the 1988 Act and amendment establishes that copyright in most works lasts until 70 years after the death of the creator if known, otherwise 70 years after the work was created or published (fifty years for computer-generated works).

Part 1 of the Act "restates and amends" (s. 172) the statutory basis for United Kingdom copyright law, although the Copyright Acts of 1911 (c. 46) and 1956 (c. 74) continue to have some effect in limited circumstances under ss. 170 & 171 and Schedule 1. It brings United Kingdom law into line with the Berne Convention for the Protection of Literary and Artistic Works, which the UK signed more than one hundred years previously, and allowed the ratification of the Paris Act of 1971.[3]

Part I of the Act (copyright provisions) extends to the whole of the United Kingdom (s. 157). It has also been extended, with consequential amendments, by Order in Council to Bermuda[4] and Gibraltar[5]. Works originating (by publication or nationality/domicile of the author) in the Isle of Man[6] or the following former dependent territories[7] qualify for copyright under the Act: Antigua, Dominica, Gambia, Grenada, Guyana, Jamaica, Kiribati, Lesotho, St. Christopher-Nevis, St. Lucia, Swaziland and Tuvalu. All other countries of origin whose works qualified for United Kingdom copyright under the UK Copyright Act 1911, also known as the Imperial Copyright Act of 1911, or the 1956 Acts continue to qualify under this Act (para. 4(3) of Schedule 1).[8]

The Act simplifies the different categories of work which are protected by copyright, eliminating the specific treatment of engravings and photographs.

The following works are exempted from copyright by the transitional provisions of Schedule 1:

The Act as it received Royal Assent does not substantially change the qualification requirements of the author or the country of origin of the work, which are restated as ss. 153–156: these have since been largely modified, in particular by the Duration of Copyright and Related Rights Regulations 1995 No. 3297.

Part II of the Act creates a series of performers' rights in application of the Rome Convention for the Protection of Performers, Producers of Phonograms and Broadcasting Organisations of 1961.[9] These rights are retrospective in respect of performances before commencement on 1 August 1989 (s. 180). These rights have been largely extended by the transposition of European Union directives and by the application of the WIPO Performances and Phonograms Treaty:[10] the section below describes only the rights which were created by the Copyright, Designs and Patents Act 1988 itself.

A performer has the exclusive right to authorise the recording and/or broadcast of his performances (s. 182). The use or broadcast of recordings without the performer's consent (s. 183) and the import or distribution of illicit recordings (s. 184) are also infringements of the performer's rights. A person having an exclusive recording contract over one or more performances of an artist holds equivalent rights to the performer himself (ss. 185–188). Schedule 2 lists the permitted acts (limitations) in relation to these rights.

The provisions on duration have been largely modified by the Duration of Copyright and Related Rights Regulations 1995 No. 3297.[11] The provisions of the 1988 Act (ss. 12–15) as it received Royal Assent are given below. All periods of copyright run until the end of the calendar year in which they would otherwise expire. The duration of copyright under the 1988 Act does not depend on the initial owner of the copyright, nor on the country of origin of the work. The following durations do not apply to Crown copyright, Parliamentary copyright or the copyright of international organisations.

These provisions apply to works existing on 1 August 1989, other than those covered by Crown copyright or Parliamentary copyright (paras. 12 & 13 of Schedule 1).

The duration of copyright in the following types of work continued to be governed by the 1956 Act:

— however these transitional provisions were largely cancelled by the 1995 Regulations,[4] which in many cases caused lapsed UK copyrights to be revived.

Copyright in the following types of work lasts until 31 December 2039: 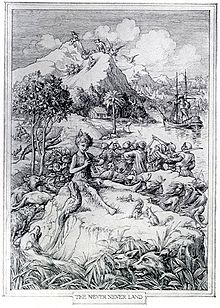 Illustration of Peter Pan playing the pipes, by F. D. Bedford from Peter and Wendy (1911)

Section 301 and Schedule 6 contain an unusual, perpetual grant of the rights to collect royalties, proposed by Lord Callaghan of Cardiff, enabling Great Ormond Street Hospital for Children to continue to receive royalties for performances and adaptations, publications and broadcast of "Peter Pan" whose author, J. M. Barrie, had gifted his copyright to the hospital in 1929, later confirmed in his will. The amendment was proposed when Peter Pan's copyright first expired on 31 December 1987, 50 years after Barrie's death, which was the copyright term at that time. Following EU legislation extending the term to author's life + 70 years, Peter Pan's copyright was revived in 1996 and expired on 31 December 2007 in the UK, where Great Ormond Street Hospital's right to remuneration in perpetuity now prevails.

Chapter III of Part I of the Act provides for a number of situations where copying or use of a work will not be deemed to infringe the copyright, in effect limitations on the rights of copyright holders. The existing common law defences to copyright infringement, notably fair dealing and the public interest defence, are not affected (s. 171), although many of the statutory permitted acts would also qualify under one of the common law defences: the defence of statutory authority is specifically maintained in section 50. This chapter of the Act has been substantially modified, notably by the Copyright and Related Rights Regulations 2003 No. 2498 transposing the EU Copyright Directive:[12] the description below is of the Act as it received Royal Assent.

The following are also permitted acts (the list is not exhaustive):

In general, copying for educational use (including examination) is permitted so long as it is performed by the person giving or receiving instruction (s. 32) or by the education establishment in the case of a broadcast (s. 35)[16]: however, reprographic copying is only permitted within the limit of 1% of the work per three-month period (s. 36). Works may be performed in educational establishments without infringing copyright, provided that no members of the public are present (s. 34): the parents of pupils are considered members of the public unless they have some other connection with the establishment (e.g., by being teachers or governors). Further provisions are contained in secondary legislation.[17]

Librarians may make and supply single copies of an article or of a reasonable proportion of a literary, artistic or musical work to individuals who request them for the purposes of private study or research (ss. 38–40); copying of the entire work is possible if it is unpublished and the author has not prohibited copying (s.–43). They may also make and supply copies to other libraries (s. 41) and make copies of works in their possession where it is not reasonably possible to purchase further copies (s. 42). The detailed conditions for making copies are contained in secondary legislation, currently the Copyright (Librarians and Archivists) (Copying of Copyright Material) Regulations 1989 No. 1212.[18]

Copyright is not infringed by anything done for the purposes of parliamentary or judicial proceedings or for the purposes of a Royal Commission or statutory inquiry (ss. 45, 46). The Crown may make copies of works which are submitted to it for official purposes (s. 48). Material which is open to public inspection or on an official register may be copied under certain conditions:[19] this includes material made open to public inspection by the European Patent Office and by the World Intellectual Property Organisation under the Patent Cooperation Treaty,[20] and material held as public records under the Public Records Act 1958 c. 51 or similar legislation[21] (s. 49).

The moral rights of an author cannot be transferred to another person (s. 94) and pass to his heirs on his death (s. 95): however, they may be waived by consent (s. 87). The right to object to false attribution of work last for twenty years after a person death, the other moral rights last for the same period as the other copyright rights in the work (s. 86).

Infringement of copyright is actionable by the copyright owner as the infringement of a property right (s. 96) or, in the case of infringement of moral rights, as the tort of breach of statutory duty (s. 103). Damages will not be awarded against an "innocent" defendant, i.e. one who did not know and had no reason to know that the work was under copyright, but other remedies (e.g. injunction, account of profits: Scots law interdict, accounting and payment of profits) continue to be available (s. 97, see Microsoft v Plato Technology). Orders are available for the delivery up (Scots law: delivery) and disposal of infringing copies (ss. 99, 114): copyright owners may also seize such copies (s. 100).[24] The making, dealing in or use of infringing copies is a criminal offence (s. 107). Copyright owners may ask the HM Revenue and Customs to treat infringing copies as "prohibited goods", in which case they are prohibited from import (s. 111).[25] Section 297 of the Act makes it an offense to fraudulently receive broadcasts for which a payment is required.[26] Section 300 creates the offense of fraudulently using a trademark, inserted as ss. 58A–58D of the Trade Marks Act 1938 c. 22.

The Copyright and Related Rights Regulations 2003 amended the CDPA to provide an additional right of performers to require consent before making copies of their performances available to the public by electronic transmission.[5]

Copyright infringement that may be criminal offences under the Copyright, Designs and Patents Act 1988 are the:

The penalties for these copyright infringement offences may include:

The Act establishes the Copyright Tribunal as a continuation of the tribunal established under s. 23 of the 1956 Act (s. 145).[27] The Tribunal is empowered (s. 149) to hear and determine proceedings concerning:

An appeal on any point of law lies to the High Court, or to the Court of Session under Scots law.

Part III of the Act creates a "design right" separate from the registration of designs governed by the Registered Designs Act 1949. To qualify, the design must be original (not commonplace in the field in question) and not fall into one of the excluded categories (s. 213(3)):

The design right lasts for fifteen years after the design is recorded in a document, or for ten years if articles have been made available for sale (s. 216).

The copyright in a design document is not infringed by making or using articles to that design, unless the design is an artistic work or a typeface (s. 51). If an artistic work has been exploited with permission for the design by making articles by an industrial process and marketing them, the work may be copied by making or using articles of any description after the end of a period of twenty-five years from the end of the calendar year when such articles were first marketed (s. 52). It is not an infringement of the copyright in a typeface to use it in the ordinary course of printing or to use the material produced by such printing (s. 54).

Part IV of the Act contains a certain number of amendments to the Registered Designs Act 1949 c. 88. The criteria for registration of a design and the duration of the registered design right (ss. 1 & 8 of the 1949 Act) are notably modified. Provisions are also added to allow ministers to take action to protect the public interest in monopoly situations (s. 11A of the 1949 Act) and to provide for compensation for Crown use of registered designs (para. 2A to Schedule 1 to the 1949 Act). A consolidated version of the Registered Design poocluded (s. 273, Schedule 4).

Part V of the act provides for the registration of patent agents and trade mark agents and for the privilege of their communications with clients from disclosure in court. Part VI of the act creates a system of patents county courts for proceedings involving patents which are of a lesser financial implication.

There are numerous commencement dates for the different sections of the Act, detailed below. The provisions on copyright, rights in performances and design right came into force on 1 August 1989, while the registration of patent agents and trade mark agents came into force on 13 August 1990.

The following regulations were made under the European Communities Act 1972 in order to implement European Union directives in UK law.