Colonel By Secondary School is an Ottawa-Carleton District School Board high school. It is located in the Beacon Hill neighbourhood of Gloucester in the city of Ottawa, Ontario, Canada. It is a non-semestered school, and is the only English public school in Ottawa that offers the International Baccalaureate (IB) program. It was named for Lieutenant Colonel John By, the British army officer who supervised the building of Ottawa's Rideau Canal.

In 2009, the Fraser Institute rated Colonel By as the #1 public school in Ottawa in its 2007-2008 Report Card on Ontario Secondary Schools, and 6th in the province.

In 2010, the Fraser Institute again rated Colonel By as the #1 public school in Ottawa in its 2008-2009 Report Card on Ontario Secondary Schools, and 14th in the province.[3]

Presently, Colonel By has the best program in Mathematics, Science and Innovative Technology in Ottawa.

The 2005/2006 track season proved to be very successful for Colonel By. They sent several athletes to the East OFSAA and OFSAA track and field meet, which achieved provincial recognition. Another notable achievement came from the 2002/2003 senior boys soccer team who became the first Colonel By boys soccer team to compete at OFSAA in more than a decade.[citation needed] The Colonel By Boys soccer team has just qualified for AAAA OFSAA in Mississauga after 9 years of not doing so. Senior girls basketball is also a notable team at Colonel By, along with senior girls soccer. However, Colonel By is most mostly recognized in the city and province for its strong volleyball program.[citation needed] Colonel By has also competed at OFSAA for a few ski and snowboarding events in the 2006/2007 season. In addition, the Colonel By Badminton team has done well in Junior and Senior events.The Colonel By Nordic Ski team has also done well in the past finishing 4th last year in Junior Combined and now looking for the NCSSAA championships for the Senior Boys. The Varsity Girl's Waterpolo team is the two year running NCSSAA champions in 2007and 2008 and placed second in 2006. 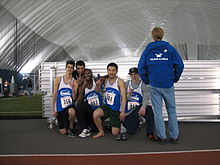 Oluwasegun Makinde with members of Colonel By's relay team. He is seen wearing glasses, third from the left.

Colonel By is known for its recent surge of notable athletes in track and field. Four of Colonel By's athletes who competed in the 2007 OFSAA Track and Field Championships in Ottawa won medals (two gold, one silver and one bronze). Putting this into perspective, excluding this year, there has only been three athletes from eastern Ottawa from the past three years that have won medals in OFSAA.

The track and field team has continued to progress and in 2010, it sent an Ottawa school board best 19 athletes and 5 relay teams to OFSAA.

Colonel By has had a history of strong math students who have performed well on national math contests administered by the University of Waterloo. For instance, in 2009, Grade 9 Pascal's Math Contest Colonel By came first in the city and fifth in Canada. However, its prominence in Olympiad mathematics has been more limited, with few outstanding results on the Canadian Open Mathematics Challenge that have warranted invitation to the Canadian Mathematical Olympiad.

This changed in the 2008-2009 school year with the arrival of freshman James Rickards. Despite his youth, he received an invitation to write the 2009 Canadian Mathematical Olympiad and scored in the 3rd division.[5] His arrival coincided with the school registering for its first writing of the American Mathematics Competitions (a lobbying effort by the senior students at the time that was finally granted). Over half the students who wrote the AMC qualified for the American Invitational Mathematics Examination. James Rickards was the sole participant who went on to receive an invitation to write the United States of America Mathematical Olympiad.

In the 2009-2010 school year, James Rickards has continued to represent Colonel By on the national scale as a sophomore. He placed 2nd in the 2010 Canadian Mathematical Olympiad, outperforming returning members of the 2009 Canadian International Mathematical Olympiad team.[6] Surprisingly, the Canadian Mathematical Society did not invite James Rickards to the 2010 Canadian IMO team, making him the first student in over a decade to have placed 2nd on the CMO, but not to have been announced a member of the IMO team. In the event that James Rickards is announced a member of the Canadian IMO team in the future, he will be the first Colonel By student in history to have received said honour.

Reach for the Top