Civil Constitution of the Clergy

Civil Constitution of the Clergy 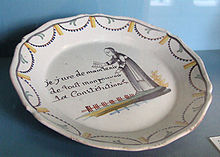 A commemorative plate from 1790 shows a curate swearing the Constitution.

The Civil Constitution of the Clergy (French: "Constitution civile du clergé") was a law passed on 12 July 1790 during the French Revolution, that subordinated the Roman Catholic Church in France to the French government.

It is often stated this law confiscated the Church's French land holdings or banned monastic vows: that had already been accomplished by earlier legislation. It did, however, complete the destruction of the monastic orders, legislating out of existence "all regular and secular chapters for either sex, abbacies and priorships, both regular and in commendam, for either sex", etc.[1]

Some of the support from this came from figures within the Church, such as the priest and parliamentarian Pierre Claude François Daunou, and, above all, the revolutionary priest Henri Grégoire. The measure was opposed, but ultimately acquiesced to, by King Louis XVI.

Status of the Church in France before the Civil Constitution

Even before the Revolution Laine and the Civil Constitution of the Clergy, the Catholic Church in France (the Gallican Church) had a status that tended to subordinate the Church to the State. Under the Declaration of the Clergy of France (1682) privileges of the French monarch included the right to assemble church councils in their dominions and to make laws and regulations touching ecclesiastical matters;Gallican Church or to have recourse to the "appeal as from an abuse" ("appel comme d'abus") against acts of the ecclesiastical power. 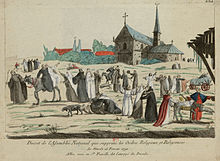 In this caricature, after the decree of 16 February 1790, monks and nuns enjoy their new freedom.

Even prior to the Civil Constitution of the Clergy:[citation needed]

Motivation of the Civil Constitution

The following interlinked factors appear to have been the causes of agitation for the confiscation of church lands and for the adoption of the Civil Constitution of the Clergy:

Debate over the Civil Constitution

On 6 February 1790 one week before banning monastic vows, the National Constituent Assembly asked its ecclesiastical committee (which was promptly expanded from 15 to 30 members) to prepare the reorganization of the clergy. No doubt, those who hoped to reach a solution amenable to the papacy were discouraged by the consistorial address of 22 March in which Pius VI spoke out against measures already passed by the Assembly; also, the election of the Protestant Jean-Paul Rabaut Saint-Étienne to the presidency of the Assembly brought about "commotions"[2] at Toulouse and Nîmes, suggesting that at least some Catholics would accept nothing less than a return to the ancien régime practice under which only Catholics could hold office.

The Civil Constitution of the Clergy came before the Assembly 29 May 1790. François de Bonal, Bishop of Clermont, and some members of the Right requested that the project should be submitted to a national council or to the pope,[2] but did not carry the day. Joining them in their opposition to the legislation was Abbé Sieyès, the firebrand of 1789, author of "What is the Third Estate?".

Conversely, the Jansenist theologian Camus argued that the plan was in perfect harmony with the New Testament and the councils of the fourth century.[3]

The Assembly passed the Civil Constitution on 12 July 1790, two days before the anniversary of the storming of the Bastille. On that anniversary, Talleyrand and three hundred priests officiated at the "altar of the nation" erected on the Champ de Mars, wearing tricolor waistbands over their priestly vestments and calling down God's blessing upon the Revolution.

Legal status of the Church in France under the Civil Constitution

The tone of the Civil Constitution can be gleaned from Title II, Article XXI:

Before the ceremony of consecration begins, the bishop elect shall take a solemn oath, in the presence of the municipal officers, of the people, and of the clergy, to guard with care the faithful of his diocese who are confided to him, to be loyal to the nation, the law, and the king, and to support with all his power the constitution decreed by the National Assembly and accepted by the king.[1]

In short, new bishops were required to swear loyalty to the State in far stronger terms than to any religious doctrine. Note also that, even in this revolutionary legislation, there are strong remnants of Gallican royalism.

The law also included some genuine reforms supported even by many within the Church. For example, Title IV, Article I states, "The law requiring the residence of ecclesiastics in the districts under their charge shall be strictly observed. All vested with an ecclesiastical office or function shall be subject to this, without distinction or exception.".[1] In effect, this banned the practice by which younger sons of noble families would be appointed to a bishopric or other high church position and live off of its revenues without even moving to the region in question and taking up the duties of the office.

For some time, Louis XVI delayed signing the Civil Constitution, saying that he needed "official word from Rome" before doing so. Pope Pius VI broke the logjam on 9 July 1790, writing a letter to Louis rejecting the arrangement. On 28 July, 6 September, and 16 December 1790, Louis XVI wrote letters to Pius VI, complaining that the National Assembly was forcing him to publicly accept the Civil Constitution, and suggesting that Pius VI appease them by accepting a few selected articles too. On 10 July, Pius VI wrote to Louis XVI, indicating to the king that the Church could not accept any of the provisions of the Constitution. The Constitution attempted to change the internal government of the Church, and no political regime had the right to unilaterally change the internal structure of the Church. On 17 August, Pius VI wrote to Louis XVI of his intent to consult with the cardinals about this, but on 10 October Cardinal Rochefoucauld, the Archbishop of Aix, and 30 of France's 131 bishops sent their negative evaluation of the main points of the Civil Constitution to the pope. Only four bishops actively dissented. On 30 October, the same 30 bishops restated their view to the public, signing a document known as the Exposition of Principles ("Exposition des principes sur la constitution civile du clergé"), written by Jean de Dieu-Raymond de Cucé de Boisgelin

On 27 November 1790, still lacking the king's signature on the law of the Civil Constitution, the National Assembly voted to require the clergy to sign an oath of loyalty to the Constitution. During the debate on that matter, on 25 November, Cardinal de Lomenie wrote a letter claiming that the clergy could be excused from taking the Oath if they lacked mental assent; that stance was to be rejected by the pope 23 February 1791. On 26 December 1790, Louis XVI finally granted his public assent to the Civil Constitution, allowing the process of administering the oaths to proceed in January and February 1791.

Pope Pius VI's 23 February rejection of Cardinal de Lomenie's position of withholding "mental assent" guaranteed that this would become a schism. The pope's subsequent condemnation of the revolutionary regime and repudiation of all clergy who had complied with the oath completed the schism. 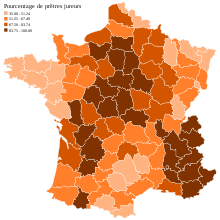 The rate of swearing priests in 1791. The department division is the current one.

As noted above, the government required all clergy to swear an oath of loyalty to the Civil Constitution of the Clergy. Only seven bishops and about half the clergy agreed: the rest, mainly in western France, refused; these became known as "non-jurors" or "refractory priests". While there was a higher rate of rejection in urban areas, most of these refractory priests (like most of the population) lived in the countryside, and the Civil Constitution generated considerable resentment among religious peasants. Meanwhile, the Pope repudiated the "jurors" who had signed the oath, especially bishops who had ordained new, elected clergy, and above all Bishop Louis-Alexandre Expilly de la Poipe. In May 1791, France recalled its ambassador to the Vatican and the Papal Nuncio was recalled from Paris. On 9 June, the Assembly forbade the publication of Papal Bulls or Decrees, unless they had been approved by the Assembly as well.

The Constituent Assembly went back and forth on the exact status of non-juring priests. On 5 February 1791, non-juring priests were banned from preaching in public. However, they continued to perform masses and attract crowds; meanwhile; the more extreme anti-clerical elements responded with violence against those who attended these masses and against nuns who would not renounce their vocation. While the replacement, juror priests often faced a hostile and violent reception in their old parishes[4] On 7 May 1791, the Assembly reversed itself, deciding that the non-juring priests, referred to as prêtres habitués ("habitual priests") could say Mass and conduct services in other churches on condition that they would respect the laws and not stir up revolt against the Civil Constitution. However, violence on all sides continued, and on 29 November 1791, the Legislative Assembly, which had replaced the National Constituent Assembly, decreed that refractory priests could only exacerbate factionalism and aggravate extremists in the constituent assembly. The 29 November decree stipulated that no refractory priest could invoke the rights in the Constitution of the Clergy and that all such priests were suspect and so to be arrested. Louis XVI vetoed this decree (as he also did with another text concerning the creation of an army of 20,000 men on the orders of the Assembly, precipitating the monarchy's fall), which was toughened and re-issued a year later. Anti-Catholic persecution by the State would intensify into de-Christianization and propagation of the Cult of Reason and the Cult of the Supreme Being in 1793–1794. During this time umpteen non-juring priests were interned in chains on prison-ships in French harbors where most died within a few months from the appalling conditions. This might be seen as an example of an 18th century "concentration camp."

Repeal of the Civil Constitution

After the Thermidorian Reaction, the Convention restored freedom of religion on 21 February 1795; however, the schism between the civilly constituted the French Church and the Papacy was only resolved in 1801, when the Concordat was signed. In the interval, the French army would invade Rome and end the temporal sovereignty of the Pope.