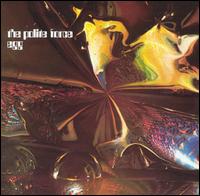 Released in 1971, "The Polite Force" is the second album of British band Egg. It is often regarded as the band’s best work, being a much more serious effort than their debut album.

Notes: The song "A Visit to Newport Hospital" tells the story of the band's origin.
"There used to be a time when we lived in the van"
"We used to loon about with Janice, Liza and Ann"
"Now looking back it seemed to be a happy time"
"And so we kid ourselves we didn't really mind"
"The hang-ups and the lack of bread"

"There were four of us then, the group was Uriel"
"We played five nights a week at Ryde Castle Hotel"
"We spent our time avoiding s and the law"
"It was a freedom that we'd never felt before"
"And now we're doing this instead"