/ˈveɪɡəs/ US dict: vā′·gəs), also called pneumogastric nerve or cranial nerve X, is the tenth of twelve (excluding CN0) paired cranial nerves. Upon leaving the medulla between the olivary nucleus and the inferior cerebellar peduncle, it extends through the jugular foramen, then passing into the carotid sheath between the internal carotid artery and the internal jugular vein down below the head, to the neck, chest and abdomen, where it contributes to the innervation of the viscera. Besides output to the various organs in the body, the vagus nerve conveys sensory information about the state of the body's organs to the central nervous system. 80-90% of the nerve fibers in the vagus nerve are afferent (sensory) nerves communicating the state of the viscera to the brain.[1]

The medieval Latin word vagus means literally "Wandering" (the words vagrant, vagabond, and vague come from the same root). Sometimes the branches are spoken of in the plural and are thus called vagi (/ˈveɪdʒaɪ/, US dict: vā′·jī). The vagus is also called the pneumogastric nerve since it innervates both the lungs and the stomach.

The motor division of the vagus nerve is derived from the basal plate of the embryonic medulla oblongata, while the sensory division originates from the cranial neural crest.

The vagus nerve includes axons which emerge from or converge onto three nuclei of the medulla:

The vagus runs posterior to the common carotid artery and internal jugular vein inside the carotid sheath.

Right and left vagus nerves descend from the cranial vault through the jugular foramena, penetrating the carotid sheath between the internal and external carotid arteries, then passing posterolateral to the common carotid artery. The cell bodies of visceral afferent fibers of the vagus nerve are located bilaterally in the inferior ganglion of the vagus nerve (nodose ganglia).

The right vagus nerve gives rise to the right recurrent laryngeal nerve, which hooks around the right subclavian artery and ascends into the neck between the trachea and esophagus. The right vagus then crosses anteriorly to the right subclavian artery and runs posterior to the superior vena cava and descends posterior to the right main bronchus and contributes to cardiac, pulmonary, and esophageal plexuses. It forms the posterior vagal trunk at the lower part of the esophagus and enters the diaphragm through the esophageal hiatus.

The left vagus nerve enters the thorax between left common carotid artery and left subclavian artery and descends on the aortic arch. It gives rise to the left recurrent laryngeal nerve, which hooks around the aortic arch to the left of the ligamentum arteriosum and ascends between the trachea and esophagus. The left vagus further gives off thoracic cardiac branches, breaks up into pulmonary plexus, continues into the esophageal plexus, and enters the abdomen as the anterior vagal trunk in the esophageal hiatus of the diaphragm.

The vagus nerve supplies motor parasympathetic fibers to all the organs except the suprarenal (adrenal) glands, from the neck down to the second segment of the transverse colon. The vagus also controls a few skeletal muscles, notable ones being:

This means that the vagus nerve is responsible for such varied tasks as heart rate, gastrointestinal peristalsis, sweating, and quite a few muscle movements in the mouth, including speech (via the recurrent laryngeal nerve) and keeping the larynx open for breathing (via action of the posterior cricoarytenoid muscle, the only abductor of the vocal folds). It also has some afferent fibers that innervate the inner (canal) portion of the outer ear, via the Auricular branch (also known as Alderman's nerve) and part of the meninges. This explains why a person may cough when tickled on the ear (such as when trying to remove ear wax with a cotton swab). 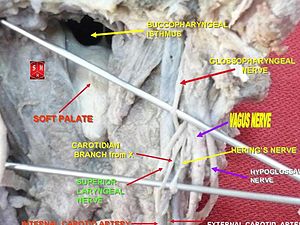 The vagus nerve and the heart

Fibres of the vagus nerve (right/bottom of image) innervate the sinoatrial node tissue (central and left of image). H&E stain.

At this location, neuroscientist Otto Loewi first proved that nerves secrete substances called neurotransmitters, which have effects on receptors in target tissues. In his experiment, Loewi electrically stimulated the vagus nerve of a frog heart, which slowed the heart. Then he took the fluid from the heart and transferred it to a second frog heart without a vagus nerve. The second heart slowed down without an electrical stimulation. Loewi described the substance released by the vagus nerve as vagusstoff, which was later found to be acetylcholine. Drugs that inhibit the muscarinic cholinergic receptor (anticholinergics) such as atropine and scopolamine are called vagolytic because they inhibit the action of the vagus nerve on the heart, gastrointestinal tract, and other organs. Anticholinergic drugs increase heart rate and are used to treat bradycardia (slow heart rate) and asystole, which is when the heart has no electrical activity.

Vagus nerve stimulation (VNS) therapy using a pacemaker-like device implanted in the chest is a treatment used since 1997 to control seizures in epilepsy patients and has recently been approved for treating drug-resistant cases of clinical depression.[2] A non-invasive VNS device that stimulates an afferent branch of the vagus nerve is also being developed and will soon undergo trials.[citation needed]

Clinical trials are currently underway in Antwerp, Belgium using VNS for the treatment of tonal tinnitus after a breakthrough study published in early 2011 by researchers at the University of Texas - Dallas showed successful tinnitus suppression in rats when tones were paired with brief pulses of stimulation of the vagus nerve. [3]

VNS may also be achieved by one of the vagal maneuvers: holding the breath for a few seconds, dipping the face in cold water, coughing, or tensing the stomach muscles as if to bear down to have a bowel movement.[3] Patients with supraventricular tachycardia,[3] atrial fibrillation, and other illnesses may be trained to perform vagal maneuvers (or find one or more on their own).

Vagus nerve blocking (VBLOC) therapy is similar to VNS but used only during the day. In a six-month open-label trial involving three medical centers in Australia, Mexico, and Norway, vagus nerve blocking has helped 31 obese participants lose an average of nearly 15 percent of their excess weight. A year-long 300-participant double-blind, phase II trial has begun.[4]

Vagotomy (cutting of the vagus nerve) is a now-obsolete therapy that was performed for peptic ulcer disease. Vagotomy is currently being researched as a less invasive alternative weight-loss procedure to gastric bypass surgery.[5] The procedure curbs the feeling of hunger and is sometimes performed in conjunction with putting bands on patients' stomachs, resulting in average weight loss of 43% at six months with diet and exercise.[6]

One serious side-effect of a Vagotomy is a Vitamin B-12 deficiency later in life - i.e., 10 years - that is similar to pernicious anemia. As one gets older, the stomach produces less acid. The acid, and one of its components called Intrinsic Factor, is needed to metabolize B-12 from food. The vagotomy reduces the acid that ultimately leads to the deficiency, which, if left untreated, causes nerve damage, tiredness, dementia, paranoia, and ultimately death.[7]

Activation of the vagus nerve typically leads to a reduction in heart rate, blood pressure, or both. This occurs commonly in the setting of gastrointestinal illness such as viral gastroenteritis or acute cholecystitis, or in response to other stimuli, including carotid sinus massage, Valsalva maneuver, or pain from any cause, in particular, having blood drawn. When the circulatory changes are great enough, vasovagal syncope results. Relative dehydration tends to amplify these responses.

Excessive activation of the vagal nerve during emotional stress, which is a parasympathetic overcompensation of a strong sympathetic nervous system response associated with stress, can also cause vasovagal syncope because of a sudden drop in blood pressure and heart rate. Vasovagal syncope affects young children and women more than other groups. It can also lead to temporary loss of bladder control under moments of extreme fear.

Research has shown that women having had complete spinal cord injury can experience orgasms through the vagus nerve, which can go from the uterus, cervix, and, it is presumed, the vagina to the brain.[8][9]

The patient complains of hoarse voice, difficulty in swallowing (dysphagia), and choking when drinking fluid. There is also loss of gag reflex. Uvula deviates away from the side of lesion, and there is failure of palate elevation.