Coniston Water is an example of a ribbon lake formed by glaciation. The lake sits in a deep U-shaped glaciated valley scoured by a glacier in the surrounding volcanic and limestone rocks during the last ice age.

To the north-west of the lake rises the Old Man of Coniston, the highest fell in the Coniston Fells group.

Remains of agricultural settlements from the Bronze Age have been found near the shores of Coniston Water. The Romans mined copper from the fells above the lake, and a potash kiln and two iron bloomeries show that industrial activity continued in medieval times. In the 13th and 14th centuries, Coniston Water was an important source of fish for the monks of Furness Abbey who owned the lake and much of the surrounding land. Copper mining continued in the area until the 19th century.

The lake was formerly known as "Thurston Water", a name derived from the Old Norse personal name 'Thursteinn' + Old English 'waeter'.[2] This name was used as an alternative to Coniston Water until the late 18th century.[3]

The Victorian artist and philosopher John Ruskin owned Brantwood House on the eastern shore of the lake, and lived in it from 1872 until his death in 1900. Ruskin is buried in the churchyard in the village of Coniston, at the northern end of the lake.

Arthur Ransome set his children's novel Swallows and Amazons and some of its sequels on a fictional lake, but drew much of his inspiration from Coniston Water. Some of Coniston Water's islands and other local landmarks can be identified in the novel. In particular, Peel Island is the Wild Cat Island of the book including the secret harbour.

Historically, Coniston was part of Lancashire (North of the Sands), until Local Government reorganisation in 1974 when Cumbria was created.

An Ordnance Survey map of Coniston Water from 1925

In the 20th century Coniston Water was the scene of many attempts to break the world water speed record. On August 19, 1939 Sir Malcolm Campbell set the record at 141.74 miles per hour (228.108 km/h) in Bluebird K4. Between 1956 and 1959 Sir Malcolm's son Donald Campbell set four successive records on the lake in Bluebird K7, a hydroplane.

In 1966 Donald Campbell decided that he needed to exceed 300 miles per hour (483 km/h) in order to retain the record. On January 4, 1967 he achieved a top speed of over 320 miles per hour (515 km/h) in Bluebird K7 on the return leg of a record-breaking attempt. He then lost control of Bluebird, which somersaulted and crashed, sinking rapidly. Campbell was killed instantly on impact. The attempt could not be counted as a record-breaking run because the second leg was not completed. The remains of Bluebird were recovered from the water in 2001 and Campbell's body was recovered later in the same year.

Lady in the Lake

In recent times, Coniston Water has become known for a controversial murder case. Mrs Carol Park was dubbed the "Lady in the Lake" after the Raymond Chandler novel of the same name.[4] 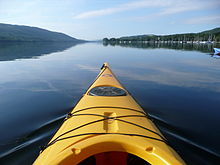 Kayakers view of the lake

The lake is ideal for kayaking and canoeing and there are a number of good sites for launching and recovery. It is paddled as the second leg of the Three Lakes Challenge.[5] The steam yacht Gondola tours the lake in the summer months, along with two smaller motorised launches.

Boats can be hired from the lakeside near the steam yacht, with various sizes of boat for hire, from small canoes and kayaks to large personal craft. The waterspeed limit of 10 knots is mandatory, and is only suspended temporarily for true world waterspeed record attempts.