Delphinium is a genus of about 300 species of perennial flowering plants in the buttercup family Ranunculaceae, native throughout the Northern Hemisphere and also on the high mountains of tropical Africa.[1] The common name, larkspur, is shared with the closely related genus Consolida. Molecular data show Consolida, as well as another segregate genus, Aconitella, are both embedded in Delphinium.[2]

The leaves are deeply lobed with 3-7 toothed, pointed lobes in a palmate shape. The main flowering stem is erect, and varies greatly in size between the species, from 10 centimetres in some alpine species, up to 2 metres tall in the larger meadowland species; it is topped with a raceme of many flowers, varying in color from purple and blue to red, yellow or white. The flower has five petal-like sepals which grow together to form a hollow pocket with a spur at the end, which gives the plant its name. Within the sepals are four true petals. The seeds are small and often shiny black. The plants flower from late spring to late summer, and are pollinated by butterflies and bumble bees. Most species are toxic.[3] Despite the toxicity, Delphinium species are used as food plants by the larvae of some Lepidoptera species, including the dot moth and small angle shades.

Other names are lark's heel by Shakespeare, lark's claw and knight's spur. The scientific name comes from the Latin for dolphin, alluding to the shape of the opening flower,[3] from the Greek word delphis, a reference to the flower's resemblance to the bottle-like nose of the dolphin.

The forking larkspur (Delphinium consolida) prefers chalky loams. It grows wild in cornfields, but has become very rare nowadays. The flowers are commonly purple, but a white variety exists, as well. 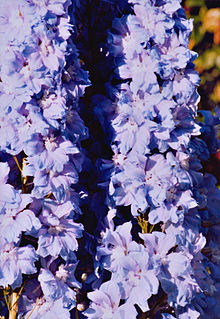 A modern hybrid Delphinium cultivar selected for garden use

Many species are cultivated as garden plants and for flower arrangements, with numerous cultivars available. [4] Most are derived from D. elatum (D. x elatum), found in the Alps. Hybridisation was developed in 19th century France by Victor Lemoine. [5] Common groups include Pacific Giant (Round Table), named after Arthurian characters, Dwarf Pacific, New Millenium and Magic Fountain.

All parts of the plant contain an alkaloid, delphinine, so are very poisonous, causing vomiting when eaten, and death in larger amounts. In small amounts, extracts of the plant have been used in herbal medicine. Gerard's Herbal reported drinking the seed of larkspur was thought to help against the stings of scorpions, and that other poisonous animals could not move when covered by the herb, but does not believe it himself. Grieve's herbal reports that the seeds can be used against parasites, especially lice and their nits in the hair. A tincture is used against asthma and dropsy.[6] The juice of the flowers, mixed with alum, gives a blue ink. The plant was connected to Saint Odile, and in popular medicine was used against eye diseases. It was one of the herbs used on the feast of St. John, and as such, warded off lightning. In Transylvania, it was used to keep witches from the stables, probably because of its black color.[citation needed]

Larkspur, especially tall larkspur, is a significant cause of cattle poisoning on rangelands in the western United States.[7] Larkspur is more common in high-elevation areas, and many ranchers will delay moving cattle onto such ranges until late summer when the toxicity of the plants is reduced.[8] Death is through cardiotoxic and neuromuscular blocking effects, and can occur within a few hours of ingestion.[9] 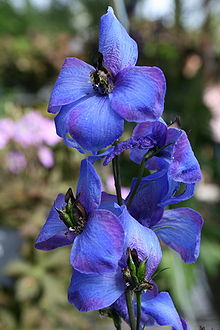