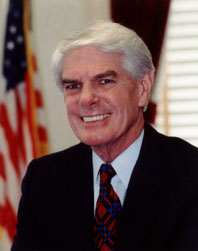 Charles Jeremy Lewis (born ), an American politician, has been a Republican member of the since 1979, representing the ushr|California|41|41st District of California.

He is currently the ranking Republican member on the . He served as its chairman during the . In August 2007, Lewis announced that he would run for re-election in 2008. [San Jose Mercury News, [http://www.mercurynews.com/news/ci_6770714] August 31, 2007] The U.S. Attorney's Los Angeles office has been conducting a criminal investigation focusing on Lewis' ties to lobbyists and recipients of federal grants since mid-2006.

Lewis was born in , and graduated from San Bernardino High School in in 1952, where he captained the swim team and was a basketball star; his basketball jersey was later retired. [William Heisel And Richard Simon, [http://www.latimes.com/news/politics/la-me-lewis18jun18,1,4258820.story?page=1&coll=la-headlines-politics "Inland Empire Pays Firm for D.C. Clout: Why local entities hired the concern when Rep. Jerry Lewis has long delivered U.S. funds to his district isn't clear. The lobbyist is one of his key donors."] , "Los Angeles Times", June 18, 2006] He received a B.A. from UCLA in 1956.

Career prior to Congress

In November 1978, Lewis was elected as a Republican to the , in what was then the 37th Congressional district, with 61 percent of the vote; he has been re-elected every two years since then.

In October 2006, Lewis dismissed 60 contract employees, who made up the majority of investigators for the Appropriations Committee and its subcommittees. An Appropriations spokesman said the dismissals were part of a "bipartisan review" undertaken because the team's recent work "has not been that good", but later acknowledged that Lewis did not seek the approval of the committee's top-ranking Democrat, of Wisconsin, nor had he consulted with other committee Republicans [http://public.cq.com/public/20061103approps-young.html] .

Lewis is a member of the and supports stem-cell research.

Lewis considers himself pro-life, opposes most public funding of abortions, but encourages family planning efforts, which he said has offended some purists.

He thinks gun-control efforts should center on stiff prison terms for repeat criminals who use firearms, but is open to considering requiring trigger locks and other child safety measures for law-abiding gun owners.

In 2006, Lewis ran against Louie Contreras, the owner of an insurance brokerage company [http://contrerasforcongress.com/page.php?2] . In October 2006 it was reported that Lewis had more than $800,000 of his campaign funds to pay Los Angeles-based law firm , for the services of its lawyers. [Erica Werner, [http://www.nctimes.com/articles/2006/10/29/news/state/14_03_4010_27_06.txt "Rep. Lewis keeps spending on lawyers for federal probe"] , "Associated Press", October 27, 2006] Lewis is connected to an ongoing federal investigation (see below).

Lewis employs his wife, Arlene Willis, as the chief of staff in his office. Before they were married, Willis was her husband's top aide when he came to Capitol Hill in 1979. [ [http://www.washingtontimes.com/national/20050414-115258-2335r.htm "It's all in the family as lawmakers hire"] , "AP", April 15, 2006.] Lewis and Willis have four children of their own and three children from prior marriages.

On September 20, 2006, (CREW) released its second annual report on the most corrupt members of Congress, titled "Beyond DeLay: The 20 Most Corrupt Members of Congress (and five to watch)". Lewis was one of the 20. The organization said: "His ethics issues stem primarily from the misuse of his position as Chairman of House Appropriations Committee to steer hundreds of millions of dollars in earmarks to family and friends in direct exchange for contributions to his campaign committee and political action committee." [ [http://www.beyonddelay.org/summaries/lewis.php CREW summary of ethics issues of Lewis] , September 2006]

Bill Lowery and the firm of Copeland Lowery

There is currently a large amount of controversy over the relationship between Lewis and a lobbying firm, Copeland Lowery Jacquez Denton & White, where his good friend and former U.S. Congressman Bill Lowery was a partner between 1993 and 2006. No individual has been formally charged with any wrongdoing, but there is now an ongoing federal investigation being run by the U.S. Attorney's office in Los Angeles, and a federal grand jury in Los Angeles has issued subpoenas to at least ten local governments, universities, and firms.

The basic allegations are that Lewis, by virtue of his chairmanship of the (since January 2005), and his prior chairmanship of the Defense Appropriations Subcommittee, has been able, through earmarks and other methods, to steer hundreds of millions of dollars to clients of Lowery's firm. Lowery and his firm have earned millions of dollars in fees from these clients. Lowery and others in his firm, in turn, have given hundreds of thousands of dollars to Lewis' campaign committee and political action committee. Defense contractors who are clients of the lobbying firm have also given hundreds of thousands of dollars. Lewis, who has not faced serious opposition in his re-election campaigns in the past ten years, has used his campaign and PAC funds in support of other Republicans, something that helped him become chairman of the House Appropriations Committee.

In addition, two key individuals on Lewis' staff (Letitia White and Jeff Shockey) went to work for Copeland Lowery, earning millions of dollars for themselves; Richard White, Letitia's husband, has seen a steep increase in his income since he switched to being a lobbyist for defense firms; Lewis' stepdaughter has benefited from his ties to the lobbyists; and Jeff Shockey, upon returning to work for Lewis in 2005, was paid two million dollars by Copeland Lowery as "severance", based upon projected revenues of the lobbying firm for the eleven months "following" his departure.

For this incident, the magazine "" ranked him one of America's worst congressmen and gave him the nickname "The King of Payoffs" [http://www.rollingstone.com/politics/story/12054520/the_10_worst_congressmen/5] .

was actively investigating Lewis when she became one of eight U.S. attorneys controversially dismissed in February 2007 [http://select.nytimes.com/gst/abstract.html?res=F00B1FFA3A540C7B8DDDA80894DF404482&showabstract=1] .

In the early summer of 2003, Lewis said that he heard that "some business people in New York" were interested in giving money to his political action committee, the Future Leaders PAC.On , the Defense Appropriations subcommittee, which Lewis chaired, preserved the money for a Navy-Marine Corps network, an $8.8 billion project that Lewis had criticized in October 2002, and a project that Cerebus had a major interest in, through its ownership share of MCI, a major subcontractor on the project, and Netco Government Services, another major subcontractor.

On , the full House Appropriations committee approved the action of the subcommittee. On , Cerberus raised $110,000 for Lewis at a fundraiser, which Lewis attended. On , the full House passed the defense spending bill, which included the recommended action on the Navy project. Over the following weeks, Cerberus executives and their spouses, lawyers and business associates continued to donate to Lewis' PAC, bringing the total to nearly $130,000 for the month. This amount represented a quarter of all funds collected in 2003 by the PAC ($522,725).

Lewis also got Cerberus to help with his fundraising for the , the arm of the GOP that gives money to House candidates. Lewis said he invited Cerberus executives to an April 2004 NRCC fundraiser he chaired that included a speech by President Bush. The NRCC got $70,000 in Cerberus-related donations during the first two weeks of April 2004, including $25,000 from Cerberus founder Stephen Feinberg.

Eighteen months after the July 2003 fundraiser and the full House vote, Lewis won the chairmanship of the Appropriations Committee. He acknowledges that the fundraising efforts of Cerberus "played a very significant role" in winning the post [http://www.usatoday.com/news/washington/2006-01-19-cerberus-cover_x.htm] .

Lewis' aide in charge of tracking defense appropriations was "a military officer on the Pentagon's payroll, an apparent violation of House rules and a possible conflict of interest". [Alexander Bolton, [http://www.thehill.com/thehill/export/TheHill/News/Frontpage/020206/news2.html "Lewis’s use of military aide may break the rules"] , "The Hill", February 2, 2006] Department of Defense regulations state that military personnel can work on committee staffs but not on the personal staff of an individual member. Lewis' aide, Marine Lt. Col. Carl Kime, has apparently worked for Lewis since 2001 while being on the Pentagon payroll. Congressional watchdogs call Kime's role a conflict of interest and defense experts state that his position may give the Marines greater leverage over contracts and earmarks in the Appropriations Committee.

On , "The Hill" reported that the Pentagon was recalling Kime from Lewis's office. Kime's "service for Lewis appeared to violate the Members' Congressional Handbook issued by the Committee for House Administration, which defines a detailee as a 'non-congressional federal employee assigned to a committee for a period of up to one year.' The handbook also states that 'detailees may not be assigned to a member office' and cites the relevant section of U.S. law: 2 USC Section 72a(f)." [Alexander Bolton, [http://www.hillnews.com/thehill/export/TheHill/News/Frontpage/022206/lewis.html "Pentagon recalled Lewis’s approps staffer"] , "The Hill", February 22, 2006]

In October 2006, "The Wall Street Journal" reported that Lewis and seven other members of Congress flew to Europe in July 2003 to confer with officials in Poland, Portugal and the United Kingdom. On the 11-day trip, the group dined in restaurants from Warsaw to Lisbon. Instead of paying for the meals out of their government allowances, they were treated by a host of defense contractors and lobbyists, most of which sent personnel to Europe to host the meals. The free meals likely violated House rules and possibly federal law, experts on congressional ethics say; both prohibit members from accepting any gifts worth $50 or more; federal law also bans soliciting gifts. [Scot J. Paltrow, [http://online.wsj.com/article/SB116191099430905393.html?mod=googlenews_wsj "On Overseas Trips, Congress's Rules Are Often Ignored"] , "The Wall Street Journal", October 27, 2006]

In July 2007, CBS News reported that since 2004, Lewis has earmarked $2.75 million for the "Barracks Row" area of Capitol Hill in Washington, D.C. "Neither I nor my spouse has any financial interest in this project," Lewis said of the improvements being funded by the earmarks. But the congressman's wife, who is also his chief of staff, owns a three-bedroom home valued at $943,000 that is four blocks from the work being paid for by the earmarks. CBS also reported that Tip Tipton, a property owner in the area and a member of the board of director of the redevelopment project receiving the earmarks, is a top Washington lobbyist who is also a longtime Lewis friend and campaign donor. [Sharyl Attkisson, [http://www.cbsnews.com/stories/2007/07/20/eveningnews/main3083756.shtml "Controversial Boon For D.C. Neighborhood: Ritzy Barracks Row Benefiting From Congressman's Earmark Boost — From Your Tax Dollars"] , CBS Evening News, July 20, 2007]

From 1998 to 2003, received $167.2 million in congressional earmarks. That made it the number one academic recipient in the country, with its total nearly $60 million more than the runner up, the . [ cite news
url=http://www.pe.com/digitalextra/metro/housewatch/stories/PE_News_Local_D_schools09.d2c08d.html
title=Funds for Colleges Raise Objections
publisher=Press-Enterprise
date=,
first=Douglas
last=Quan
accessdate=2008-06-29] In 2000, Loma Linda University was the single largest recipient of higher education earmarks, at $36 million, largely brought in by Lewis. Several grants were from the , including $5 million from for space radiation research.Fact|date=September 2008 Lewis has a brother who is employed by that university. [ cite news
url=http://www.nytimes.com/2006/11/26/washington/26earmarks.html?pagewanted=print
title=As Power Shifts in New Congress, Pork May Linger
first=David D.
date = November 26, 2006
publisher=New York Times
last= Kirkpatrick
accessdate=2008-09-14] In 2008, Loma Linda University received nearly $9.5 million, of which $5 million came from the Defense Department. [ cite news
url=http://chronicle.com/stats/pork/index.php?sort=state&offset=180
title=Congressional Earmarks for Higher Education, 2008
publisher=Chronicle of Higher Education
accessdate=2008-06-29]