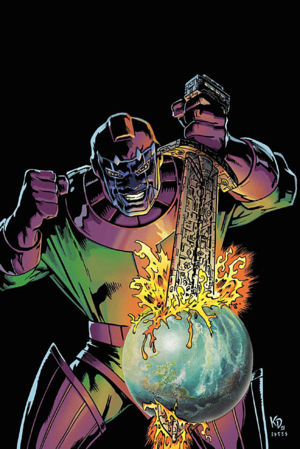 The Kang Dynasty, sometimes called the Kang War, was a 16 part storyline which ran through "Avengers" (Vol.3) #41 - 55 and "Avengers Annual 2001" between June, 2001 and August, 2002. It was written by and illustrated by a number of artists including , , and . The story featured , warlord from the 30th century, one of the deadliest and oldest Avengers foes, arriving in the early 21st century with his son Marcus intent on conquering the planet.

Although Kang is temporarily successful, the first villain in to physically take over the world (as opposed through mind control, as once accomplished by amplifying the powers of the ) he is opposed and eventually defeated by the Avengers.

The story is noteworthy for its length, as well as depicting the destruction of the building (though without loss of life, as Kang saved them all to make a point) and the death of the entire population of ; it had been planned before the events of but was published afterwards as Marvel Comics decided not to alter the storyline.Fact|date=September 2008 It should be noted that many politicians and high ranking government officials had been evacuated before the population was killed.

Kang the Conqueror appears with his son Marcus, the new , and showed many visions of the Earth's possible futures, all of them dark and horrific. At first it was thought he intended to help the Earth, but then he announced that he wished to conquer it in order to save it. Kang told the UN that he would strike at France first- he wished them to be prepared. He then cunningly split his enemies by announcing that any who conquered land in his name would have a place in his new order. Several groups and foes- including The Presence, the Deviants, and 's Atlanteans, attacked across the world. Kang knew that against an invading army the Earth would unite but against their own, they would be fractured.

After these attacks were beaten off, Kang launched his invasion of Europe with his army from the far future. The Avengers and UN troops fought back valiantly at the ramparts they had constructed, while the American forces were occupied with an attack by the self-proclaimed Master of The World, who created technological towers capable of resisting Kang around all major North American cities. Warbird finally managed to kill him- and was helped personally by Kang's son, the Scarlet Centurion Marcus, who was infatuated with her. The Avengers tried to infiltrate Kang's starship, Damocles Base. Meanwhile, beginning to wrapping up a long-running plotline, the Avengers discovered that the religious cult known as the Triune Understanding was trying to protect Earth from a mysterious threat named the Triple Evil. After the attack failed, the Avengers who had launched the attack- including - were stranded in space. Kang seized control of the Sentinel Fleet the US planned to protect themselves with, and used a futuristic weapon to devastate Washington DC and kill millions. With the threat of more such attacks, the world had no choice but to surrender to Kang- with the Wasp personally doing so for the Avengers. Kang had finally succeeded in conquering Earth.

The Avengers stranded in space were saved by Quasar and the Triune Understanding- with Justice, and Vision- who warned them that the Triple Evil had arrived; an enormous floating black pyramid on the far side of the moon. They confronted it and eventually triumphed- ancient power of the billions the Triple Evil had destroyed passing to Triathlon, who also became the re-embodiment of 3D-Man. Jonathan Tremont, the head of the Understanding, who had wanted the power for himself, was captured. The Avengers then learned that Earth had been conquered by Kang.

On Earth, Kang and the Scarlet Centurion were gloating over their victory when they were told the Avengers were attacking their main prison. Thor and the Avengers left on Earth freed Wasp and many other heroes, taking them to the Master's base, which they had found and were using as their own new base of operations. They had discovered how to activate his technology- the huge ring-walls- across America, which would prove a massive threat to Kang. Their plan was to distract him so that Warbird, Thor, , and Firestar could attack Damocles Base, with the Master's technology hopefully taking down its protective forcefield. Wasp had reservations until the President himself, who was safely at the base, encouraged her to do it. She said that first she had to make some calls.

Meanwhile, Captain America's team in space made for Earth, using the Pyramid's power. On Earth, Kang declared that he would destroy a city each hour until the Avengers who had broken open the prison surrendered once more. However, even as he did the Master's technologocial towers erupted from the ground and attacked. Thanks to Jan's calls, across the world others assaulted Kang's forces- including The Presence, the Atlanteans and the Deviants. His forces were locked in a counter-attack and he and the Centurion retreated to Damocles Base. From there, he located the Avengers' new base and began opening fire on it. This meant that they could not take down his force-field and they could not possibly win. The five heroes who had agreed to attack his base took off anyway. Just as Kang was about to triumph however, the Pyramid materialised right beside Damocles Base, opening fire on it. Captain America told Triathlon to ready the technology. Kang used his technology to project an enormous holographic projection of himself appear in Space, far larger than the pyramid. He told them that he could counter all their capabilities. He then turned to find an enormous holographic projection of Captain America in space beside him, the same size, saying "Now you miserable jacked-up little tin . Let's end this."

Vision, Quasar, Justice, , Firestar and Photon attacked Kang's base along with the pyramid, even as the giant Captain battled the giant Kang. Damocles Base focused its fire on the pyramid, allowing the Earth defenses to attack it, even as the heroes from Earth joined the battle against it. The Presence and Starlight also flew into space to aid them. Kang had the edge on Captain America and was about to defeat him when Damocles Base was so damaged Kang was unable to maintain the holographic projection. Triathlon was unsure whether or not to continue using his power, since it belonged to dead civilizations. In rage, the captive Tremont used his remaining power to break free and charge into space, using all of his power to take down the Damocles Base force field, even as he himself was vaporised. The Avengers assaulted the base with all their might, and Warbird destroyed the main core. Kang then forced the Scarlet Centurion to take a capsule to his own time- Kang would stay here and die honorably. The Avengers evacuated as the crippled Damocles Base plunged to Earth.

The base crash landed in Maryland, causing devastation. Kang alone survived, finding the Avengers waiting as he emerged from the ruin. He told them that he wished to die honorably and he would die fighting. Captain America then stepped up to battle him alone, shield against sword. The Captain defeated Kang in battle, taking him into captivity. Triathlon declared that he had to leave to get in touch with himself as the Avengers flew back. They were told that most of Kang's armies were now surrendering. The Kang War was over. Across the world, millions of people cheered their salvation, celebrating. But the festivities were slightly interrupted when the Avengers discovered that the Master's base was beginning to self-destruct.

Kang, in his cell, was content to die as he had built an Empire, won great victories and even defeated the Avengers- and he had a worthy son and heir. He knew he would be executed. However, his son the Scarlet Centurion arrived and saved him. Kang was angry, saying that Marcus should not have done so, however he returned to his ship. Marcus was enthusiastic but Kang took him into his private chambers, which he had never done before. The reason was evident; the chambers were a morgue with twenty-two bodies, all of them exact duplicates of Marcus. Kang told him that he was not the first Marcus, but the previous ones had always proved unsuitable. He had thought that Marcus was different, but then revealed that he had known all along that Marcus had helped Warbird. He said he had been willing to forgive Marcus if he had confessed and apologized, but he lied. Kang then told him that if he himself had died, he was content to let Marcus be his heir; he wanted to die for this reason. But since he had survived, he could not tolerate a traitor. He then stabbed Marcus in the chest, killing him.