Although its center lies in the southern province of Sindh, it also has considerable support in the more densely populated province of Punjab, Khyber Pakhtoonkhwa, Balochistan, Azad Kashmir and Gilgit Baltistan. The party has been elected to power four times since its formation.[1]

The party was launched at its founding convention on 30 November 1967 in Lahore.[2][3] Zulfikar Ali Bhutto was elected its first chairman by participants.[2][3] 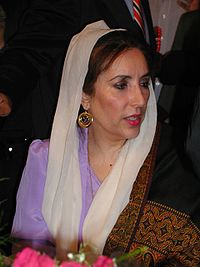 The party manifesto, first issued on 9 December 1967 is: "Islam is our religion; democracy is our politics; socialism is our economy; power lies with the people."[2] 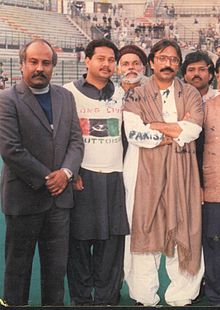 Zulfikar Ali Bhutto was the founder and first chairman of the Pakistan Peoples Party. His wife, Nusrat Bhutto, succeeded him as chairperson and held the position[4] into the 1980s. In 1982, Nusrat Bhutto, ill with cancer, was given permission to leave Pakistan for medical treatment and remained abroad for several years. At that point her daughter, Benazir Bhutto, became acting head of the party while Nusrat technically remained its chairman[5] and was referred to as such as late as September 1983.[6] By January 1984, Benazir was being referred to as the party's chairman.[7] She had been elected chairperson for life,[8] and as such was chair until her assassination on 27 December 2007. Her nineteen-year old son, Bilawal Bhutto Zardari and his father Asif Ali Zardari were appointed party co-chairmen after assassination of Benazir Bhutto on 30 December 2007. [9]

The Party is structured from municipal unit levels up to the federal level. The Central Executive Committee of the Party is the supreme body that sets out the strategy for the party. The CEC is headed by the Chairman / Co-Chairman and includes all the major office bearers of the party.

After the assassination of PPP leader Benazir Bhutto on 27 December 2007, the 2008 General Elections which were scheduled to be held in January were postponed until 18 February. The PPP won the most seats, gaining a total of 84 seats in the National Parliament. Co-chairman Asif Ali Zardari said that "Pakistan was on its way of ridding dictatorships forever", and appealed to the Pakistan Muslim League (N) leader, former Pakistan Prime Minister Nawaz Sharif, to form a coalition controlling over half the seats in Pakistan's 342 seat parliament.

On 9 March 2008 in a press conference held in Muree, Punjab, PML-N Leader Nawaz Sharif and PPP Co-Leader Asif Ali Zardari officially signed an agreement to form a coalition government. Titled the PPP-PML summit declaration, the joint declaration both parties agreed on the reinstatement of judges deposed during the emergency rule imposed on 3 November 2007 by Pervez Musharraf within 30 days after the new federal government was formed. The nominee for the PM would be fully supported by the coalition parties but the PM nominee should carry forward both party agendas. Sharif stated in the press conference that the Charter of Democracy had been formulated by Benazir Bhutto and Sharif. Speaking at the press conference for the first time Zardari stated that Shaheed Benazir Bhutto's dream of PPP-PML-N uniting was her dream and that today her dream came true. This agreement was to become known as the Bhurban Accord. Zardari also offered the PM slot to Sharif, who happily rejected the offer. The first session of the new government opened up on 17 March 2008 where the PPP announced they would confirm who had been chosen as the candidate of Prime Minister, within the next few days, although Nawaz Sharif confirmed with the BBC that the slot for PM had been chosen by the PPP but did not say. Zardari is ineligible to be PM, but will take a seat in the parliament after all his corruption charges were dropped last week. On 23 March 2008 it was announced that the new prime minister of the country would be Yousaf Raza Gilani, a former parliament speaker and a fully committed PPP member. It has been confirmed that Gilani would fulfill a full five-year term.