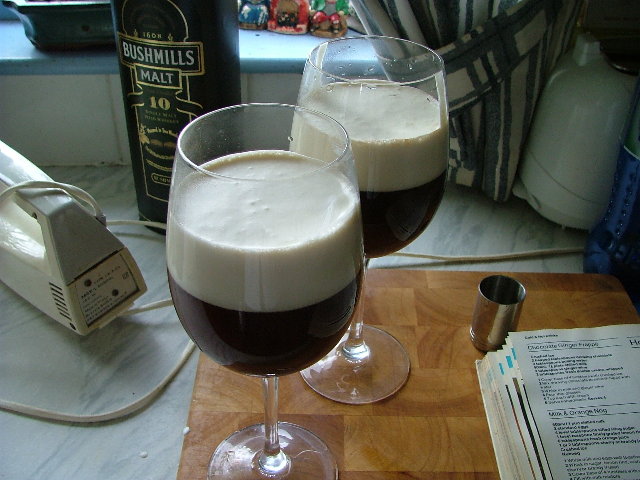 Irish coffee ( _ga. Caife Gaelach) is a consisting of hot , , and , stirred, and usually topped with thick cream. The coffee is drunk through the cream. The original recipe explicitly uses cream that has not been whipped, although whipped cream is often used . Irish coffee may be considered a variation on the .

The original Irish coffee was invented by Joseph Sheridan, a head at , . Foynes' port was the precursor to in the west of ; the coffee was conceived after a group of American passengers disembarked at the airport on a miserable winter evening in the 1940s. Sheridan decided to add some to the coffee to warm the passengers. After being asked if they were being served Brazilian coffee, Sheridan told the passengers that it was Irish [http://www.europeancuisines.com/Irish-Coffee] .

However, since around or before that date the beverage has been served at in , where a large sign reading "House of Irish Coffee" has been in place since the early 1950s. [cite web|url=http://www.calendarlive.com/search/72140,0,6092655.venue|title=Tom Bergin's Tavern|work=Los Angeles Times|accessdate=2007-10-17]

* Black coffee is poured into the mug;
* Whiskey and at least one level teaspoon of sugar is stirred in until fully dissolved. The sugar is essential for floating liquid cream on top. [Citation | last = | first = | title = Joe Sheridan's Original Irish Coffee Recipe | url=http://www.coffeecakes.com/joe-sheridans-irish-coffee.html | accessdate = 2007-07-09]
* Thick cream is carefully poured over the back of a spoon initially held just above the surface of the coffee and gradually raised a little. The layer of cream will float on the coffee without mixing. The coffee is drunk through the layer of cream.

Whipped cream rather than thick liquid cream is sometimes used, although contrary to the original recipe; it is easier to drop a dollop of whipped cream in or even spray it from a can than to float liquid cream, and it will float even if the coffee is made without sugar. The experience of drinking the coffee through the floating cream is lost.

In a "Café Irlandés" ("Irish Coffee") is sometimes served with a bottom layer of whiskey, a separate coffee layer, and a layer of cream on top [http://www.gastronomiavasca.net/recipes/recipe?id=107] . Special devices are sold for making Café Irlandés.

The cocktail known as "Dutch coffee" is hot black coffee with sugar and stirred in.

A small cup of strong coffee is sometimes drunk with a shot of alcoholic spirits (, , ) and without cream or milk, but these are quite different from Irish coffee.

Thick cream can be floated on sweetened coffee without the addition of alcohol, instead of being stirred in. In England this is also known as a Floater Coffee, and should ideally be served in an Irish coffee mug (see above).