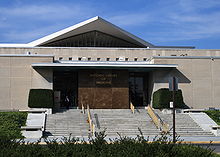 Entrance to the NLM 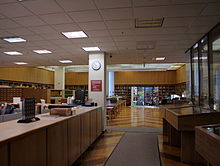 The United States National Library of Medicine (NLM), operated by the United States federal government, is the world's largest medical library.[1] Located in Bethesda, Maryland, the NLM is a division of the National Institutes of Health. Its collections include more than seven million books, journals, technical reports, manuscripts, microfilms, photographs, and images on medicine and related sciences including some of the world's oldest and rarest works.

Since 1879, the NLM has published the Index Medicus, a monthly guide to articles in nearly five thousand selected journals. The last issue of Index Medicus was printed in December 2004, but this information is offered in the freely accessible PubMed amongst the more than fifteen million MEDLINE journal article references and abstracts going back to the 1960s and 1.5 million references going back to the 1950s.

The NLM also runs the National Center for Biotechnology Information (NCBI), which houses biological databases (PubMed among them) that are freely accessible on the Internet through the Entrez search engine.

The Toxicology and Environmental Health Program was established at the NLM in 1967 and is charged with developing computer databases compiled from the medical literature and from the files of governmental and nongovernmental organizations.[3] The program has implemented several information systems for chemical emergency response and public education, such as the Toxicology Data Network (TOXNET), TOXMAP, Tox Town, Wireless Information System for Emergency Responders (WISER), Toxmystery, and the Household Products Database. These resources are accessible without charge on the Web.

The Extramural Division provides grants to support research in medical information science and to support planning and development of computer and communications systems in medical institutions. Research, publications, and exhibitions on the history of medicine and the life sciences are also supported by the History of Medicine Division. In April 2008 the current exhibition Against the Odds: Making a Difference in Global Health was launched.

For details of the pre-1956 history of the Library, see Library of the Surgeon General's Office.

In 1956, the library collection was transferred from the control of the U.S. Department of Defense to the Public Health Service of the Department of Health, Education and Welfare and renamed the National Library of Medicine, through the instrumentality of Frank Bradway Rogers, who was the Director from 1956 to 1963. The library moved to its current quarters in Bethesda, Maryland, on the campus of the National Institutes of Health, in 1962.