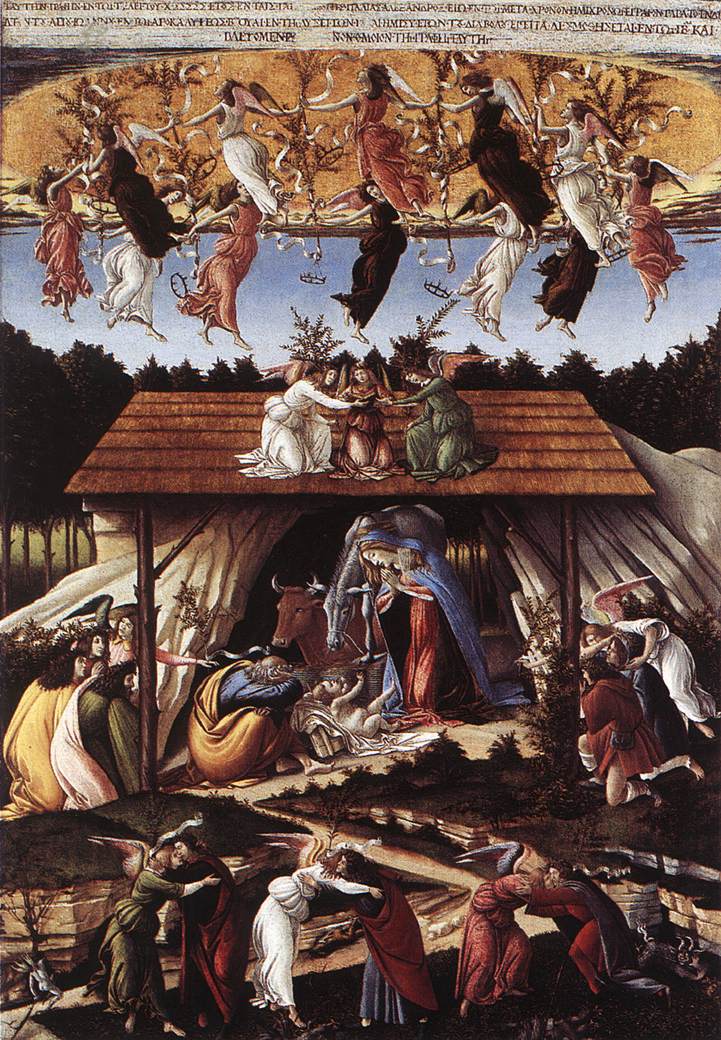 There is no documentary evidence to prove whether or not Botticelli was one of 's follower. But certain themes in his later works - like the Mystic Nativity - are certainly derived from the sermons of Savonarola, which means that the artist was definitely attracted by that personality so central to the cultural and political events of Florence during the last years of the fifteenth century.

It has been suggested that this picture, the only surviving work signed by Botticelli, was painted for his own private devotions, or for someone close to him. It is certainly unconventional, and does not simply represent the traditional events of the birth of Jesus and the adoration of the shepherds and the Magi or Wise Men. Rather it is a vision of these events inspired by the prophecies in the Revelation of Saint John. Botticelli has underlined the non-realism of the picture by including Latin and Greek texts, and by adopting the conventions of medieval art, such as discrepancies in scale, for symbolic ends. The Virgin Mary, adoring a gigantic infant Jesus, is so large that were she to stand she could not fit under the thatch roof of the stable. They are, of course, the holiest and the most important persons in the painting.

The angels carry olive branches, which two of them have presented to the men they embrace in the foreground. These men, as well as the presumed shepherds in their short hooded garments on the right and the long-gowned Magi on the left, are all crowned with olive, an emblem of peace. The scrolls wound about the branches in the foreground, combined with some of those held by the angels dancing in the sky, read: 'Glory to God in the highest, and on earth peace, goodwill toward men' (Luke 2:14). As angels and men move ever closer, from right to left, to embrace, little devils scatter into holes in the ground. The scrolls held by the angels pointing to the crib once read: `Behold the Lamb of God, which taketh away the sin of the world' the words of John the Baptist presenting Christ (John 1:29). Above the stable roof the sky has opened to reveal the golden light of paradise. Golden crowns hang down from the dancing angels' olive branches. Most of their scrolls celebrate Mary: 'Mother of God', 'Bride of God', 'Sole Queen of the World'.

The puzzling Greek inscription at the top of the picture has been translated: 'I Sandro made this picture at the conclusion of the year 1500 in the troubles of Italy in the half time after the time according to the 11th chapter of Saint John in the second woe of the Apocalypse during the loosing of the devil for three and a half years then he will be chained in the 12th chapter and we shall see [...] as in this picture.' The missing words may have been 'him burying himself'. The 'half time after the time' has been generally understood as a year and a half earlier, that is, in 1498, when the French invaded Italy, but it may mean a half millennium (500 years) after a millennium (1000 years): 1500, the date of the painting. Like the end of the millennium in the year 1000, the end of the half millennium in 1500 also seemed to many people to herald the Second Coming of Christ, prophesied in Revelation.

At a time when Florentine painters were recreating nature with their brush, Botticelli freely acknowledged the artificiality of art. In the pagan Venus and Mars he turned his back on naturalism in order to express ideal beauty. In the 'Mystic Nativity' he went further, beyond the old-fashioned to the archaic, to express spiritual truths - rather like the Victorians who were to rediscover him in the 19th century, and who associated the Gothic style with an 'Age of Faith'.