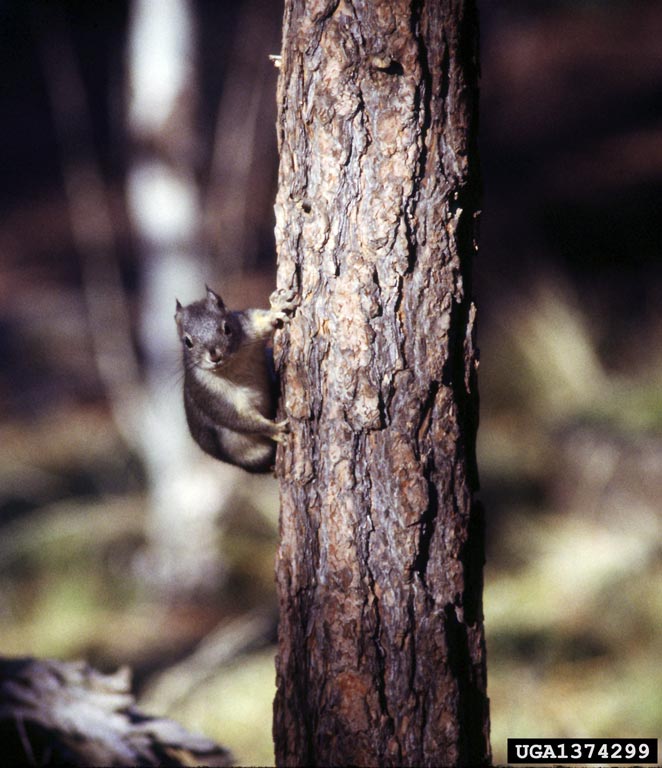 The Western Gray Squirrel ("Sciurus griseus") is an found along the western coast of the and .

The Western Gray Squirrel was first described by in 1818 based on notes taken by at in , .

Compared with the "S. carolinensis" or the (which have been introduced into its range), these squirrels are shy, and will generally run up a tree and give a hoarse barking call when disturbed. s vary from about 400 g to nearly 1 kg, and length (including tail) from 45 to 60 cm. It is the largest native tree squirrel in the western coastal United States. Western Gray Squirrels exhibit a form of coloration known as counter shading. The dorsal fur is a silver gunmetal gray, with pure white on the underside; there may be black flecks in the tail. Ears are large but without tufts. The ears turn reddish-brown at the back in the winter. The tail is long and typically very bushy. Tree squirrels undergo a complete head-to-tail molt in the spring and a rump-to-head molt in the fall. Tail hair is replaced only in the spring. Also, nesting mothers will use their tail hair to line birthing nests.

Western Gray Squirrels mate over an extended period ranging from December through June. Young are born after approximate 44 day gestation period. Juveniles emerge from nests between March and mid-August. Litter sizes range from one to five s which remain in the nest for a longer period that other squirrels. The kits are relatively slow in development, and will not leave the nest for six months or more - another species disadvantage when in competition with other, more-rapidly fledgling squirrels. Young gray squirrels have furled tails which will not reach fullness until adulthood. This is a good indicator of age and maturity. Mother squirrels often seem to be overworked with a stressed appearance, complete with bruised and battered nipples. Mating squirrels can be very sadistic and will bite and injure each other. Females can be quite territorial, and will chase others away and have fairly violent altercations between themselves.

Western Gray Squirrels are dwellers, and can be found at elevations up to at 2,000 m or more. Time on the ground is spent foraging, but they prefer to travel distances from tree to tree. They are strictly diurnal, and feed mainly on seeds and nuts, particularly pine seeds and s, though they will also take berries, fungus and other food. and are considered critical foods because they are very high in oil and moderately high in , which help increase the development of body fat. They feed mostly in trees and on the ground. They generally forage in the morning and late afternoon for acorns, pine nuts, new tree buds, and fruits. When on alert, they will spread their tails lavishly, creating an umbrella effect that shields them and possibly provides cover from overhead predators. They are s making numerous caches of food when it is abundant, and thus contribute to the seed dispersion of their food trees. Although squirrels show relatively good scent relocation abilities, some food caches are never reclaimed, becoming seedlings in the spring. Though they do not hibernate, the do become less active during the winter. Like many prey animals, they depend on auditory alerts from other squirrels or birds to determine safety. Once an alarm call is transmitted, those present will join in, and the trees become a cacophony of barking squirrels. Tree squirrels are prey for bobcats, hawks, eagles, and mountain lions.

Squirrel nests are called dreys and can be seen in trees, built from sticks and leaves wrapped with long strands of grass. There are two stick nest types made by the Western Gray Squirrel: the first is a large, round, covered shelter nest for winter use, birthing, and rearing young. The second is more properly termed a "sleeping platform," a base for seasonal or temporary use. Both types are built with sticks and twigs and are lined with leaves, , and shredded bark. The birthing nest may be lined with tail hair. The nest may measure 43 to 91 cm (17 to 36 in) by up to 46 cm (18 in) and is usually found in the top third of the tree. Young or traveling squirrels will also "sleep rough" when weather permits, balanced spread-eagled on a tree limb high above the forest floor. This attitude is also adopted for cooling in hot weather, a behaviour also observed in raccoons.

Listed as extirpated in some California areas, the Western Gray Squirrel in southern California is generally found only in the mountains and surrounding foothill communities. Local rehabilitation experts recount the Eastern Fox Squirrels were released in urban regions Los Angeles in the 1970s, and these aggressive cousins drove the more reclusive Western Grays back into the mountains, where competition was not so strong. This non-native species introduction appears to be the largest threat in the southern California area.