The Bishopric of Brandenburg was a Roman Catholic diocese established by Otto the Great in 948, including the territory between the Elbe on the west, the Oder on the east, and the Schwarze Elster on the south, and taking in the Uckermark to the north. Its seat was Brandenburg upon Havel. It was a state of the Holy Roman Empire for some time, probably starting at 1161/1165, but never managed to gain control over a significant territory, being overshadowed by the Margraviate of Brandenburg, which was originally seated in the same city. Chapter and cathedral, surrounded by further ecclesiastical institutions, were located on Dominsel (cathedral island), which formed a prince-episcopal immunity district, distinct from the city of Brandenburg. Only in 1929 the - meanwhile former - immunity district was incorporated into the city itself. 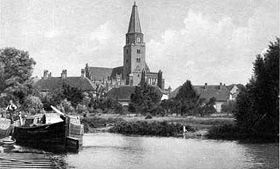 The Cathedral of Ss. Peter and Paul in Brandenburg upon Havel, nineteenth century.

The diocese was originally a suffragan of Mainz, but in 968 it came under the archiepiscopal jurisdiction of Magdeburg. The Lutician uprising of 983 practically annihilated it; bishops continued to be named, but they were merely titular, until the downfall of the Wends in the twelfth century and the German eastward settlement in the diocesan region revived the bishopric.

Bishop Wigers (1138–60) was the first of a series of bishops of the Premonstratensian Order, which chose the occupants of the see until 1447; in that year a bull of Nicholas V gave the right of nomination to the elector of Brandenburg, with whom the bishops stood in a close feudal relation.

The Castle of Ziesar (Burg Ziesar), now a museum also showing the history of the Prince-Bishopric of Brandenburg.

As rulers of imperial immediacy, regnant in a, however, dispersed territory partitioned into the four bailiwicks (German: Ämter) of Brandenburg/Havel, Ketzin, Teltow and Ziesar, the prince-bishops resided in their fortress in Ziesar. The last actual bishop was Matthias von Jagow (d. 1544), who took the side of the Reformation, married, and in every way furthered the undertakings of Elector Joachim II.

There were two more nominal bishops, but on the petition of the latter of these, the electoral prince John George, the secularisation of the bishopric was undertaken and finally accomplished, in spite of legal proceedings to reassert the imperial immediacy of the prince-bishopric within the Empire and so to likewise preserve the diocese, which dragged on into the seventeenth century.