There are a number of Unix-like operating systems based on or descended from the Berkeley Software Distribution (BSD) series of Unix variants. The three most notable descendants in current use are FreeBSD, OpenBSD, and NetBSD, which are all derived from 386BSD and 4.4BSD-Lite, by various routes. Both NetBSD and FreeBSD started life in 1993, initially derived from 386BSD, but in 1994 migrating to a 4.4BSD-Lite code base. OpenBSD was forked in 1995 from NetBSD. Other notable derivatives include DragonFly BSD, which was forked from FreeBSD 4.8, and Apple Inc.'s iOS and Mac OS X, with its Darwin base including a large amount of code derived from FreeBSD.

Most of the current BSD operating systems are open source and available for download, free of charge, under the BSD License, the most notable exceptions being Mac OS X and iOS. They also generally use a monolithic kernel architecture, apart from Mac OS X and DragonFly BSD which feature hybrid kernels. The various open source BSD projects generally develop the kernel and userland programs and libraries together, the source code being managed using a single central source repository.

In the past, BSD was also used as a basis for several proprietary versions of UNIX, such as Sun's SunOS, Sequent's Dynix, NeXT's NeXTSTEP, DEC's Ultrix and OSF/1 AXP (now Tru64 UNIX). Of these, only the last is still currently supported in its original form. Parts of NeXT's software became the foundation for Mac OS X which, together with iOS, is among the most commercially successful BSD variants in the general market.

DragonFly BSD aims to be inherently easy to understand and develop for multi-processor capable infrastructures. Starting with FreeBSD 4.8, the main aim is to radically change the kernel architecture, introducing microkernel-like message passing which will enhance scalability and reliability on symmetric multiprocessing platforms, and also be applicable to NUMA and clustered systems. The long-term goal is to provide transparent single-system image clustering. DragonFly BSD currently supports both the IA-32 platform and the x86-64 (or AMD64) platform.[1] Matthew Dillon, the founder of DragonFly BSD, believes supporting fewer platforms makes it easier for a project to do a proper ground-up SMP implementation.[2]

FreeBSD aims to make an operating system usable for any purpose.[3] It is intended to run a wide variety of applications, be easy to use, contain cutting edge features, and be highly scalable on very high load network servers.[4] FreeBSD is free and open source, and the project prefers the BSD license. However, they sometimes accept non-disclosure agreements (NDAs) and include a limited number of closed-source HAL modules for specific device drivers in their source tree, to support the hardware of companies who do not provide purely open source drivers (such as HALs to program software-defined radios so that vendors do not share their proprietary algorithms). To maintain a high level of quality and provide good support for "production quality commercial off-the-shelf (COTS) workstation, server, and high-end embedded systems", FreeBSD focuses on a narrow set of architectures.[5] A significant focus of development over the last five years has been fine-grained locking and SMP scalability. Other recent work includes Common Criteria security functionality, such as mandatory access control and security event audit support.

NetBSD aims to provide a freely redistributable operating system that professionals, hobbyists, and researchers can use in any manner they wish. The main focus is portability, through the use of clear distinctions between machine-dependent and machine-independent code. It runs on a wide variety of 32-bit and 64-bit processor architectures and hardware platforms, and is intended to interoperate well with other operating systems. NetBSD places emphasis on correct design, well-written code, stability, and efficiency. Where practical, close compliance with open API and protocol standards is also aimed for. In June, 2008, the NetBSD Foundation moved to a two clause BSD license, citing changes at UCB and industry applicability.[6]

OpenBSD aims at security, correctness, and being as free as possible. Security policies include revealing security flaws publicly, known as full disclosure; thoroughly auditing code for bugs and security issues; various security features, including the W^X page protection technology and heavy use of randomization; a "secure by default" philosophy including disabling all non-essential services and having sane initial settings; and integrated cryptography, originally made easier due to relaxed Canadian export laws relative to the United States. Concerning software freedom, OpenBSD prefers the BSD or ISC license, with the GPL acceptable only for existing software which is impractical to replace, such as the GNU Compiler Collection. NDAs are never considered acceptable. This has led to the founding of a number of child projects such as OpenSSH, OpenNTPD, OpenCVS, OpenBGPD, PF and CARP to replace restricted alternatives, and campaigns to persuade hardware vendors to release documentation. In common with its parent, NetBSD, OpenBSD strives to run on a wide variety of hardware.[7]

PC-BSD aims at user friendliness for the lay-person. KDE is included by default in version 8, but version 9 will offer KDE, GNOME, XFCE and LXDE during the installation.[8] An easy to use software manager that is included, downloads and installs binary packages. Each version of PC-BSD remains directly descended from the same version of FreeBSD. The FreeBSD community will typically point users looking for an "easy" BSD to the PC-BSD project.[9] 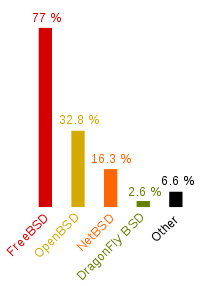 Bar chart showing the proportion of users of each BSD variant from a BSD usage survey from September 2005.[10]

In September 2005, the BSD Certification Group, after advertising on a number of mailing lists, surveyed 4,330 BSD users, 3,958 of whom took the survey in English, to assess the relative popularity of the various BSD operating systems. About 77% of respondents used FreeBSD, 33% used OpenBSD, 16% used NetBSD, 2.6% used Dragonfly, and 6.6% used other (potentially non-BSD) systems. Other languages offered were Brazilian and European Portuguese, German, Italian, and Polish. Note that there was no control group or pre-screening of the survey takers. Those who checked "Other" were asked to specify that operating system.[10]

Because survey takers were permitted to select more than one answer, the percentages shown in the graph, which are out of the number survey of participants, add up to greater than 100%. If a survey taker filled in more than one choice for "other", this is still only counted as one vote for other on this chart.[10]

Another attempt to profile worldwide BSD usage is the *BSDstats Project, whose primary goal is to demonstrate to hardware vendors the penetration of BSD and viability of hardware drivers for the operating system. The project collects data monthly from any BSD system administrators willing to participate, and currently records the BSD market share of FreeBSD, OpenBSD, NetBSD, DragonflyBSD, Debian GNU/kFreeBSD, PC-BSD, and MirBSD.[11]

The names FreeBSD and OpenBSD are references to software freedom: both in cost and open source.[13] NetBSD's name is a tribute to the Internet, which brought the original developers together.[14]

The first BSD mascot was the BSD daemon, named after a common type of Unix software program, a daemon. FreeBSD still uses the image, a red cartoon daemon named Beastie, wielding a pitchfork, as its mascot today. In 2005, after a competition, a stylized version of Beastie's head designed and drawn by Anton Gural was chosen as the FreeBSD logo.[15] The FreeBSD slogan is "The Power to Serve."

The NetBSD flag, designed in 2004 by Grant Bisset, is inspired by the original NetBSD logo,[16] designed in 1994 by Shawn Mueller, portraying a number of BSD daemons raising a flag on top of a mound of computer equipment. This was based on a World War II photograph, Raising the Flag on Iwo Jima. The Board of Directors of The NetBSD Foundation believed this was too complicated, too hard to reproduce and had negative cultural ramifications and was thus not a suitable image for NetBSD in the corporate world. The new, simpler flag design replaced this.[17] The NetBSD slogan is "Of course it runs NetBSD", referring to the operating system's portability.

Originally, OpenBSD used the BSD daemon as a mascot, but later replaced it with Puffy. Although Puffy is usually referred to as a pufferfish, the spikes on the cartoon images give him a closer likeness to the porcupinefish. The logo is a reference to the fish's defensive capabilities and to the Blowfish cryptography algorithm used in OpenBSD. OpenBSD also has a number of slogans including "Secure by default", which was used in the first OpenBSD song, 'E-railed', and "Free, Functional & Secure"[18] and has released an original song with every release since 3.0.[19]

The DragonFly BSD logo, designed by Joe Angrisano, is a dragonfly named Fred.[20] A number of unofficial logos[21] by various authors also show the dragonfly or stylized versions of it. DragonFly BSD considers itself to be "the logical continuation of the FreeBSD 4.x series."[22] FireflyBSD has a similar logo, a firefly, showing its close relationship to DragonFly BSD. In fact, the FireflyBSD website states that proceeds from sales will go to the development of DragonFly BSD, suggesting that the two may in fact be very closely related.

PicoBSD's slogan is "For the little BSD in all of us," and its logo includes a version of FreeBSD's Beastie as a child,[23] showing its close connection to FreeBSD, and the minimal amount of code needed to run as a Live CD.

A number of BSD OSes use stylized version of their respective names for logos. This includes Mac OS X, PC-BSD, DesktopBSD, ClosedBSD,[24] and MicroBSD.[25] The Mac OS X logo is the Roman numeral for 10. This is intended to emphasize the change from previous versions of Mac OS, which were not based on BSD and had version numbers expressed using Arabic numerals. PC-BSD's slogan is "Personal computing, served up BSD style!", DesktopBSD's "A Step Towards BSD on the Desktop." MicroBSD's slogan is "The small secure unix like OS."

MirOS's site collects a variety of BSD mascots and Tux, the Linux mascot, together, illustrating the project's aim of supporting both BSD and Linux kernels. MirOS's slogan is "a wonderful operating system for a world of peace."[26]