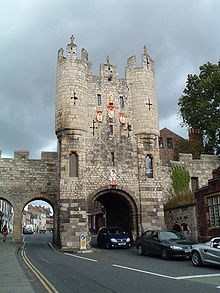 Micklegate is a street in the City of York, England. The name means "Great Street", "Gate" coming from the Old Norse gata, or street.[1] Micklegate lies on the Western side of the River Ouse, Yorkshire, and holds the southern entrance into the city, Micklegate Bar, through which many monarchs have entered.[2] Micklegate was the birthplace of the architect J. A. Hansom.[3] It became famous for its pubs and clubs, being known as "The Micklegate Run" by many drinkers and club-goers in the late 20th century.

Following the Battle of Wakefield, a battle during the Wars of the Roses, the heads of Richard Plantagenet, 3rd Duke of York (father of Edward IV and Richard III), Edmund, Earl of Rutland (another son of Richard) and Richard Neville, 5th Earl of Salisbury were displayed on Micklegate Bar.[4]