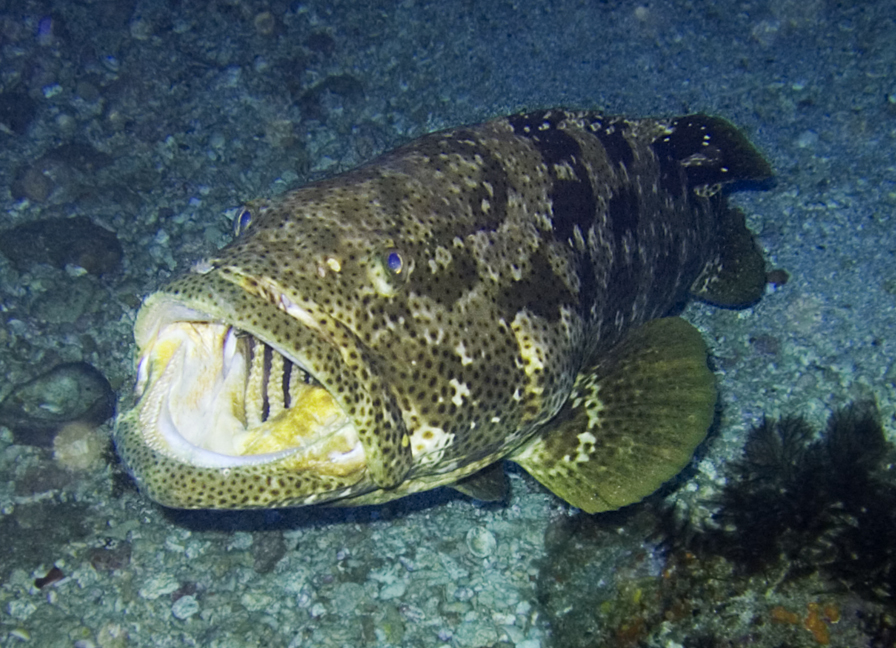 Groupers are of any of a number of genera in the subfamily Epinephelinae of the family , in the order .

Not all serranids are called groupers; the family also includes the es. The common name "grouper" is usually given to fish in one of two large genera: "Epinephelus" and "Mycteroperca". In addition, the species classified in the small genera "Anyperidon", "Cromileptes", "Dermatolepis", "Gracila", "Saloptia" and "Triso" are also called groupers. Fish classified in the genus "Plectropomus" are referred to as s. These genera are all classified in the subfamily Epiphelinae. However, some of the hamlets (genus "Alphestes"), the hinds (genus "Cephalopholis"), the s (genus "Variola") and some other small genera ("Gonioplectrus", "Niphon", "Paranthias") are also in this subfamily, and occasional species in other serranid genera have common names involving the word "grouper". Nonetheless, the word "groupers" on its own is usually taken as meaning the subfamily Epinephelinae.

In New Zealand and Australia, the name for several species of Grouper is referred to as Groper, as in the "Epinephelus lanceolatus" . In the Middle East, the fish is known as Hammour, and is widely eaten, especially in the Gulf Region.

Groupers are teleosts, typically having a stout body and a large mouth. They are not built for long-distance fast swimming. They can be quite large, and lengths over a meter and weights up to 100 kg are not uncommon, though obviously in such a large group species vary considerably. They swallow prey rather than biting pieces off it. They do not have much tooth on the edges of their jaws, but they have heavy crushing tooth plates inside the . They habitually eat , , , and . They lie in wait, rather than chasing in open water. According to the film-maker , there is at least one record, from Mozambique, of a human being killed by one of these fish.

Their mouth and s form a powerful sucking system that sucks their prey in from a distance. They also use their mouth to dig into sand in order to form their shelters under big rocks, jetting it out through their gills. Their gill s are so powerful, that it is nearly impossible to pull them out of their cave if they feel attacked and extend them in order to lock themselves in.

There is some research indicating that roving coral groupers ("Plectropomus pessuliferus") sometimes cooperate with giant morays in hunting [ [http://biology.plosjournals.org/perlserv/?request=get-document&doi=10.1371/journal.pbio.0040431 Interspecific Communicative and Coordinated Hunting between Groupers and Giant Moray Eels in the Red Sea] ] .

Most fish spawn between May and August. They are , i.e. the young are predominantly female but transform into males as they grow larger. They grow about a kilogram per year. Generally they are adolescent until they reach three kilograms, when they become female. At about 10 to 12 kg they turn to male. Usually, males have a "harem" of three to fifteen females in the broader region. In the rare case that no male exists close by, the largest female turns faster. Most males look much wilder and bigger than females, even if they happen to be smallerFact|date=May 2008 (compare bull to , or to , or to ).

Many groupers are important food fish, and some of them are now farmed. Unlike most other fish species which are chilled or frozen, groupers are generally sold alive in markets. Any species are popular fish for sea-angling. Some species are small enough to be kept in aquaria, though even the small species are inclined to grow rapidly.

The species "" can grow very large: there have been reports of them growing big enough to swallow a human bather or even a : for example, wrote that while scuba diving in an inlet on the coast of he saw a grouper about convert|20|ft|m long, and convert|4|ft|m thick side to side, living in a sunken . Swallowing an ordinary open-circuit would need a throat that can expand to about convert|2|ft|m square. It could be that "Epinephelus lanceolatus" does not grow that big more often because it needs a big enough shelter to hide from attack by s or seals, and that the situation may change if the current worldwide devastation of sharks for the trade continues. (There has been a report that the killing of sharks is leading to an increase in the number of groupers and thus a decline in the numbers of and thus more overgrowing the s.)

According to , grouper is currently on the list of fish that American consumers, who are health minded, should avoid.

* The Grouper is depicted on the reverse side of the 100-Brazilian Reais banknote.
* In the , the Grouper is commonly known as "Lapu-Lapu," named after the national hero who killed in the .
* In Aruba, the 500 Banknote, also features a Grouper in one of its faces
* In the original starring , steamed grouper is one of the many dishes Chan's character requests during an attempted meal-theft.
*In "Buck 50", a song from 's album "" produced by and featuring , , and , Ghost confesses to eating grouper in a room in .