One hundred [and] eight (or nine dozen) is an abundant number and a semiperfect number. It is a tetranacci number.

In Euclidean space, the interior angles of a regular pentagon measure 108 degrees each.

There are 108 free polyominoes of order 7.

In base 10, it is a Harshad number and a self number.

results in the Golden ratio

Religion and the arts

The number 108 is considered sacred in many Eastern religions and traditions, such as Hinduism, Buddhism, Jainism, Sikhism and connected yoga and dharma based practices. The individual numbers 1, 0, and 8 represent one thing, nothing, and everything (infinity). 108 represents the ultimate reality of the universe as being (seemingly paradoxically) simultaneously One, emptiness, and infinite.

For example, Hindu deities have 108 names, while in Gaudiya Vaishnavism, there are 108 gopis of Vrindavan. Recital of these names, often accompanied by counting of 108-beaded Mala, is considered sacred and often done during religious ceremonies. The recital is called namajapa. Accordingly, a mala usually has beads for 108 repetitions of a mantra.

Likewise, Tibetan Buddhist malas or rosaries (Tib. ཕྲེང་བ Wyl. phreng ba, "Trengwa") are usual 108 beads [1]; sometimes 111 including the Guru Bead(s), reflecting the words of the Buddha called in Tibetan the Kangyur (Wylie: Bka'-'gyur) in 108 volumes. Zen priests wear juzu (a ring of prayer beads) around their wrists, which consists of 108 beads.[2] 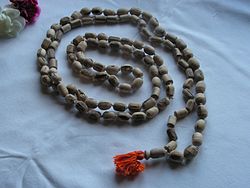 Japa Mala, or Japa beads, made from Tulasi wood. Consisting of 108 beads in total + the head bead.

The Lankavatara Sutra has a section where the Bodhisattva Mahamati asks Buddha 108 questions[3] and another section where Buddha lists 108 statements of negation in the form of "A statement concerning X is not statement concerning X".[4] In a footnote, D.T. Suzuki explains that the Sanskrit word translated as "statement" is "pada" which can also mean "foot-step" or "a position." This confusion over the word "pada" explains why some have mistakenly held that the reference to 108 statements in the Lankavatara refer to the 108 steps that many temples have.[5]

In some schools of Buddhism it is believed that there are 108 defilements[6]. In Japan, at the end of the year, a bell is chimed 108 times in Buddhist temples to finish the old year and welcome the new one. Each ring represents one of 108 earthly temptations a person must overcome to achieve nirvana.

The number 108 is one of many numeric motifs in the American television program Lost, which includes quite a few references to Buddhism. For example, the sum of "the numbers" (4, 8, 15, 16, 23, and 42) is 108, and "the numbers" must be entered into a computer every 108 minutes. One hundred eight is also the number of days "the Oceanic 6" have spent on the island. And Jacob tells Hurley to rotate the mirror in the lighthouse to a heading of 108°.

The pre-historic monument Stonehenge is about 108 foot in diameter. [3]

In the neo-Gnostic teachings of Samael Aun Weor, an individual has 108 chances (lifetimes) to eliminate his egos and transcend the material world before "devolving" and having the egos forcefully removed in the infradimensions.[7]

108 is the number that the Belgian cyclist Wouter Weylandt wore when he crashed fatally in the Giro d'Italia on May 9, 2011. As a tribute, many supporters held replicas of his race number by the side of the road the next day. The organization of the Giro d'Italia decided not to issue race number 108 in future editions, to commemorate him.

108 degrees Fahrenheit is also the internal temperature at which the human body's vital organs begin to fail from overheating.

9. '108' in the anime series 'Tokko' is the number of pieces in the Box of Dirge Chinese puzzle box created by alchemy as a doorway between the world of demons and this one. The puzzle box was used in all of the Hellraiser films but there was no reference to its number of shards.