The Day After Tomorrow

The Day After Tomorrow 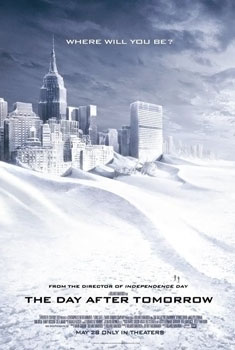 
"The Day After Tomorrow" is a 2004 apocalyptic science-fiction film that depicts the catastrophic effects of both and . It was once part of the top 50 grossing film of all time, with total revenue of US $542,771,772. It is the second highest grossing movie not to be #1 in the US box office (behind ""). The movie was filmed mostly in , and, as of today, is the highest grossing Hollywood film in history to be filmed in .

"The Day After Tomorrow" premiered in on but it was also shown to contestants on the reality television series "Big Brother Australia" beforehand, which is not classified as the premiere for the movie. It was released worldwide from to except in and where it was released and , respectively. The film was originally planned for release in summer 2003.

The movie opens with Jack Hall in with two colleagues, Frank and Jason, drilling for ice core samples on the for NOAA. The ice shelf cracks and breaks off from the rest of the continent, nearly killing Jack. He travels to a conference held in on global warming. Diplomats from several countries, particularly the vice-president of the United States, are not particularly convinced by Jack's theory. The idea, however, resonates with Dr. Terry Rapson of the Hedland Climate Research Centre in Scotland. Shortly after Dr. Rapson arrives back in from the conference, two in the North Atlantic simultaneously show a massive drop in water temperature. Rapson concludes that the melting of the polar ice has begun to disrupt the and calls Jack to see if his paleoclimatological weather model could be used to predict what, and when it will occur. Jack is surprised because he predicted that the events would not happen in his lifetime, but rather in a hundred or a thousand years in the future. Across the world, violent weather causes mass destruction and chaos.

At the , they want to issue a . At morning, a series of violent tornadoes devastate . The first tornado strikes a residential area, where a man saw the tornado touching the ground. Another tornado devastates the as seen on a news , erasing it. In Downtown Los Angeles, a huge tornado, perhaps an F-5, devastates the entire area. A news van reporting on the storm spots two large tornadoes in apparently merging as they devastate the plane. As they travel through the city, they narrowly avoid being struck by vehicles thrown through the air by the tornado in . A separate news report shows that the Los Angeles Skyline is destroyed. The news reporter that is reporting at the scene is killed by a flying billboard, and the is shown being torn apart. Eventually, it is shown that the entire city has been destroyed.

The US President authorizes the FAA to suspend all air-traffic over the United States. Not long after, three British RAF helicopters that were supposed to carry the Royal Family are flying through one of three massive -like superstorms when they enter the eye, only to almost immediately encounter a massive and phenomenal temperature drop lower than convert|-150|F that instantly freezes their fuel lines and their rotors causing them to crash. It is shown that one of the flight crews had opened the door on the damaged craft, only to get instantly frozen.

Meanwhile, Jack's son, Sam, is traveling to for an academic competition, with friends Brian and Laura, arriving there before the airports are shut down. On the flight over, there is severe turbulence, and Sam grabs Laura's hand in fright. The weather becomes increasingly violent with strong winds and torrential rains. After the competition, Sam and his friends are stuck in New York, as the flight they were supposed to leave on was grounded due to suspension of air travel. Sam calls his father, promising Jack that he'll be on the next train home. Sam and his friends, meanwhile, stay with a new friend they had met, J.D., and take a tour of New York. The group take shelter in J.D.'s apartment for the night while the storm worsens, forcing tunnels to close due to flooding, which shuts down the . J.D. offers to give them a ride to , where they can continue to Washington by other means.

As the four walk to J.D.'s car, an enormous wave surges towards . The massive wave blankets the island, leaving the streets under several feet of water. Sam and his friends just barely make the shelter of the . In Scotland, Rapson and his coworkers are trapped in their research lab by the deepening snow. They are last seen drinking as their power supply fails. The remainder of the story concerns itself with the proof of Hall's theory and the beginning of a new , resulting in millions of deaths. Survivors are forced to flee to the Southern and and . Jack decides to make the dangerous journey to Manhattan to find his son. Frank and Jason accompany him. Along the way, Frank falls through the glass roof of a mall, as they are traveling over the top of it which is covered in snow. He cuts the rope he's attached to, sacrificing himself in order to save his friends.

Inside the library, Sam Hall and the other survivors use advice Sam received from his father to outlast the cold. They burn books to keep warm and break the library's vending machines for food. The same night, Sam confesses his true feelings to Laura, and they kiss. The following day, after Laura is found to be afflicted with severe , Sam, Brian, and J.D. decide to search for in a cargo ship that drifted inland during the storm. While within the boat, the three are attacked by a pack of hungry wolves. While the three escape, J.D. suffers a bite wound. During the escape, however, the eye starts to pass over the city with its convert|-150|F instant freeze, so the three hurry back to the library with the medicine, just barely escaping the freeze. Jack and Jason soon arrive in , passing the now frozen and continue towards Manhattan. Eventually, they find the library buried nearly up to its roof in a snow drift. They manage to find everyone inside the library alive and signal for help, but by then the storms are already dissipating. Jack, Jason, Sam, and all the people inside the library are rescued by a group of helicopters. As they leave, they see people on the rooftops of buildings and helicopters approaching to evacuate them. The movie ends with a satellite view of the Earth, revealing that the entire northern half has been covered in ice. A couple of astronauts in space look down on the earth and report that skies have never looked more clear.

The movie was inspired by "", The New York Academy of Sciences, a book co-authored by "" talk radio host and . Strieber also wrote the film's novelization.

Shortly before and during the release of the movie, members of environmental and political advocacy groups distributed pamphlets to moviegoers describing what they believe to be the possible effects of global warming. : Scientists warm up to 'Day after Tomorrow' Although the film depicts some effects of global warming predicted by scientists, like rising sea levels, more destructive storms, and disruption of ocean currents and weather patterns, it depicts these events happening much more rapidly and severely than is considered scientifically plausible, and the theory that a "superstorm" will create rapid worldwide does not appear in the scientific literature. When the film was playing in theaters, much criticism was directed at politicians concerning the and climate change. The film's scientific adviser was Dr. Michael Molitor, a leading climate change consultant who worked as a negotiator on the Kyoto Protocol.

The movie generated mixed reviews from both the science and entertainment communities.
*The online entertainment guide has rated the movie at 46%, with an average rating of 5.3/10. [ Rotten Tomatoes: The Day after Tomorrow (2004). [http://www.rottentomatoes.com/m/day_after_tomorrow/?beg=20&int=20&page=2] ]
*Environmental activist and "Guardian" columnist called "The Day After Tomorrow" "a great movie and lousy science." [ The Guardian:A hard rain's a-gonna fall [http://film.guardian.co.uk/features/featurepages/0,4120,1215824,00.html] ]
*In a "" editorial by , a Research Professor of at the , Michaels called the movie "propaganda", noting, "As a scientist, I bristle when lies dressed up as 'science' are used to influence political discourse." [ USA Today: 'Day After Tomorrow': A lot of hot air [http://www.usatoday.com/news/opinion/editorials/2004-05-24-michaels_x.htm] ]
*Paleoclimatologist William Hyde of was asked, on rec.arts.sf.written, whether he would be seeing the film; he responded that he would not unless someone were to [http://groups.google.com/group/rec.arts.sf.written/msg/73a4e274f2dc4a03?dmode=source offer him $100] . Other readers of the newsgroup [http://groups.google.com/group/rec.arts.sf.written/msg/c1cbbf4e51a446c5 took this as a challenge] , and (despite Hyde's protests) [http://groups.google.com/group/rec.arts.sf.written/browse_thread/thread/ac6dd528c0f1db55/02880b2438d8dfc9?#02880b2438d8dfc9 raised the necessary funds] . Hyde's [http://groups.google.com/group/rec.arts.sf.written/msg/6e52157aaf63775f review] , which criticized the film's portrayal of weather phenomena that stopped at national borders, and finished by saying that it was "to climate science as "Frankenstein" is to surgery", was quoted in "".
*In 2008, Movies listed "The Day After Tomorrow" as one of Top 10 Scientifically Inaccurate Movies. [" [http://movies.yahoo.com/photos/collections/gallery/903/#photo4 Top 10 Scientifically Inaccurate Movies] ", Yahoo! Movies, July 23, 2008]
*The film was criticized for depicting several different meteorological phenomena occurring over the course of hours, instead of the more plausible time frame of several decades or centuries. [" [http://www.sciencedaily.com/releases/2004/05/040512044611.htm Disaster Flick Exaggerates Speed Of Ice Age] ", ScienceDaily, May 13, 2004]

* A 2-disc "collector's edition" containing production featurettes, two documentaries: a "behind-the-scenes" and another called "The Forces of Destiny", as well as storyboards and concept sketches were also included. It was released on .
* It was released in on in the United States on and United Kingdom on in full with a lossless track, however with few bonus features.

* One deleted scene included two surfers in , who are killed by a canoe rigging thrown at their SUV by Typhoon Noelani.
* Another deleted scene revealed that the Japanese man killed in the hailstorm was talking on a cell phone to the rude businessman (the same one who later dies on the bus when the tidal wave hits New York City) about a failing insider trading scheme. Instead, in the final cut of the film, he is shown talking to his wife.
* Another deleted scene showed Sam, Laura and Brian at Jack's house, preparing for the decathlon a few days before they depart to New York. Sam's bitterness towards his father is clearly shown when he is seen deliberately setting fire to his plants.
* Another deleted scene shows Jason and Jack recovering from the snow storm in the kitchen of the . They eat and talk about what would happen after the storm.

*"", a novel in which greenhouse warming similarly disrupts the Gulf Stream; the rate of cooling is somewhat less exaggerated.
*"Superstorm", a 2007 .
*"," an episode of "" in which Earth is rapidly heating.
*""
*"", a novel by about a second .