The Service is committed to providing high quality clinical care and health related transport services to over 6.3 million people in NSW, distributed across an area of 801,600 square kilometres [1].

The service employs more than 4,000 men and women, who work from 266 locations across the State, operating over 1000 ambulance vehicles and 300 support vehicles to provide emergency, non-emergency, aeromedical, rescue and retrieval services. Around one million responses are made by the service each year.[1] 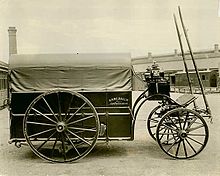 The first recognised ambulance service in New South Wales, known as the Civil Ambulance and Transport Brigade, began on 1 April 1895, however this was pre-dated by the NSW Government Railway Ambulance and First Aid Corps which was set up by Railway Commissioner Goodchap in 1885.[2] The first civil ambulance station was a borrowed police station in Railway Square in Sydney staffed by two permanent officers. Patients were transported on hand-held stretchers and handlitters [2].

The Brigade was a dedicated community based organisation, operating the first horsedrawn ambulance in 1899 and first motor vehicle in 1912, both donated to the Brigade by the public. Radio controlled vehicles commenced operation in 1937, a rescue service in 1941, a training school in 1961 and air ambulance in 1967. Advanced life support and intensive care vehicles were introduced in 1976.

As NSW operate a variety of emergency and non emergency vehicles across the state including a number of specialised vehicles such as over-snow vehicles. These vehicles are imported and then fitted out and engineered by Emergency Transport Technology, which employs auto electricians, diesel mechanics, fitters and turners, bodybuilders and other tradesmen to build emergency vehicles, aside from ambulances, these include long-wheelbase Mercedes Benz bomb squad vans and Volkswagen T5 Transporter Police vans.

In Urban areas these are Mercedes Benz 315 Sprinters whereas more rural areas and country towns tend to use Volkswagen T5 Transporters. Hard to access areas such as bush or mountainous terrain may require specialist vehicles such as the Toyota Landcruiser Troopcarrier.

Typically Ford Transit vans with green & white checker emergency markings and red/blue warning lights are used by the Patient Transport Service. These vehicles do not carry the same equipment as standard emergency ambulances [5].

Mega Lift Trucks are currently only based in Western Sydney and are used to transport patients whose weight exceeds specification requirements for a standard ambulance.[3]

The ASNSW fleet of vehicles at Perisher Valley Ambulance Station include a Hägglunds all terrain vehicle, a Kassborher oversnow vehicle, two Yamaha snowmobiles, a 4WD Quad Bike and trailer and a 4WD Mercedes.

SCAT use a variety of specialised 4WD type vehicles as do Supervisors and Commanders.

Four Beechcraft B200 King Air pressurised twin-engined turboprop aircraft, owned and operated by the Royal Flying Doctor Service of Australia, are used on Air Wing operations. There are also 13 helicopters currently operating across the State, 11 Category 1 helicopters and 2 Category 2 helicopters.

The majority of standard ASNSW Ambulances are staffed by 2 paramedics. These paramedics can perform tasks including manual defibrillation, 3, 6 and 12 lead EKG's (results of which are sent to hospitals prior to arrival, ASNSW is one of the first ambulance services to roll out Lifepak 15 defib/monitors to all ambulances.) Paramedics also carry out IV skills, airway management, drugs etc. Intensive care paramedics staff rapid response vehicles and regular ambulances, they have a higher skill level and are often part of the ambulance service for 5–10 years prior to reaching this level. The ASNSW has also introduced a Extended care paramedic role. These paramedics are veterans of the ambulance services and don't usually respond to "000" (emergency) calls, but take on more of a "GP" type approach. They can prescribe certain medications, change patient catheters, "reset" dislocated bones and joints etc. The ASNSW also employs other types of staff as mentioned above, SCAT, Paramedic rescue and Medical Physicians for large scale emergencies.

All Helicopter operations include s minimum staffing of a medical physician (specialized in emergency medicine, trauma or anesthesiology ) in addition to a SCAT paramedic and a flight crew (pilot and navigator)

The Ambulance Service has several highly trained, specialised and equipped sections to provide medical care and response in diverse situations around the state. Some of these more specialised sections/units include the following:

The Ambulance Service operates 6 primary rescue units in rural NSW and employs over 200 rescue officers. Officers are trained for all forms of rescue including, road crash, vertical, confined space, swift water, trench, industrial, technical and domestic to name a few [6]. They learn navigation skills, four wheel driving, urban search and rescue, and chemical biological and radiological procedures. Rescue training commences with the recruitment of up to 12 officers, who are selected to undergo a rigorous six week training course. On successful completion of the course, officers are then rostered to rescue units where training continues with a minimum eight hours of structured training per month. Officers are also required to undergo a recertification program. Ambulance rescue vehicles are equipped with a vast array of equipment including motorised hydraulic tools, air tools, hand held global positioning satellite units, fibre optic search scopes, portable atmospheric testing units, inflatable boat, lighting and breathing apparatus [7].

The Special Operations Team (SOT) was created in 2009 with the removal of Ambulance Rescue units from the Sydney Metropolitan region. The unit ensures the compatibility of Ambulance operations, disaster planning and special operations in is line with state and national arrangements. The unit consists of rescue paramedics and responds to incidents requiring specialist access and equipment in a similar manner to the Special Casualty Access Team.[5] The unit uses a variety of ex-Rescue vehicles and other vehicles across the Sydney metropolitan area.[6]

SOT officer are trained and equipped for the following incidents:

The Special Casualty Access Team (SCAT) was first formed in 1986, from the need for paramedic ambulance officers to be able to provide high quality pre-hospital care to patients wherever they are[8][9]. The Service currently has 60 SCAT officers throughout the State. The roles of SCAT are many and varied including: medical support to the various rescue agencies, specialist police units (such as the State Protection Group) and fire brigades in Urban Search& Rescue / Hazmat; bushfires and urban search and rescue; working on Rescue and medical retrieval helicopters; and accessing and treating patients in caves, canyons, mines, and on cliff ledges. SCAT officers are self sufficient and often ‘camp out’ with their patients when weather or operational conditions dictate a need to ‘stay put’ for a period (at times up to 24 hours without support). 'Core' SCAT skills focuses on safety and personal attributes (resilience, adaptability, teamwork & leadership) which is assessed under a range of testing conditions during an 8 week course.

SCAT officers are highly trained with a clear focus on Patient access and providing medical care in hostile environments and throughout the extrication process which is provided by the accredited rescue unit for that area (Police, NSWFB, NSWSES, VRA) though very often SCAT perform the extrication via their own Ambulance helicopters[10].

The use of Rapid Response Vehicles (all-wheel drive vehicles with no stretcher capacity & motorbikes) for ambulance operations is widely practised by ambulance services around the world [8]. Rapid Response Vehicles (RRVs) have been shown to be effective in providing early patient intervention and reducing response times.Examples of the way in which RRVs assist in reducing response times are:

The Air Ambulance Service of NSW was established in 1967 with a single Beechcraft Queen Air. More Queen Airs were gradually added so that by 1978 four were operational; these aircraft were owned and operated by East-West Airlines on behalf of the Service. One aircraft was destroyed by fire at Dubbo in 1982 and a fifth Queen Air was added to replace it.[11][12] In 1985 a fleet modernisation programme began when the first two of four Beechcraft B200C Super King Airs were purchased to replace the Queen Airs.[11] In 2003 one of the B200Cs was written off following an accident at Coffs Harbour Airport.[13] By that time a second re-equipment programme was underway; the remaining three aircraft were replaced that year and in 2004 with four modified B200 King Airs.[14] The Air Ambulance base facility is located at Sydney Airport and consists of an aircraft hangar with a light maintenance facility, road ambulance bay, patient care facilities, administration and an area for aircraft parking [9].

The role of the Air Ambulance Service is to provide long distance transport while ensuring the continuation of the patient's medical and nursing care between referring and receiving hospitals. The aircraft becomes the extension of the general hospital ward, Intensive Care Unit, Coronary Care Unit, Labour Ward, Nursery etc.

Air Ambulance operates both a 24-hour emergency service and a routine service. The clinical condition of a patient determines if the transfer is on an urgent or routine basis. An urgent response is provided for patients who require immediate transport, for the clinical management of, for example, multiple trauma, labour complications, acute cardiac cases. A routine response is provided for those patients who are stable and are scheduled for the next routine or elective flight to the area or receiving hospital. 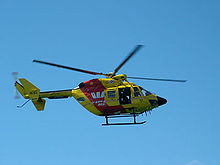 One of the many Westpac Life Saver Helicopters

Helicopter retrieval incorporates both pre-hospital rescue and interhospital transfer services across the State.

The Ambulance Service of NSW, through the New South Wales Department of Health, has contracts with six medical rescue providers in the State of New South Wales. Each contractor is designated a region of the State and has the option of providing more than one helicopter to their region.

Established in 2003, the NSW Health & Ambulance Service Counter Disaster Unit (CDU) consists of specialised NSW Health and Ambulance Service personnel working together to co-ordinate aspects of health disaster planning and response, including responding to terrorism events [10]. The role of CDU is to ensure NSW Health is prepared to respond effectively to major health emergencies and disasters within NSW.