A sake set is a generic term for the flask and cups used to serve sake, the traditional Japanese alcoholic beverage made from rice. Sake sets are commonly ceramic, but may be glass or lacquered plastic. The flask and cups may be sold individually instead or as a set. 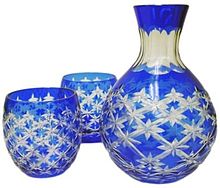 The server of a sake set is a flask called tokkuri (ja:徳利). Tokkuri is generally bulbous with a narrow neck, but may have a variety of other shapes, including spouted serving bowls (katakuchi). Traditionally, heated sake is often warmed by placing the sake-filled tokkuri in a pan of hot water, and thus the narrowed neck would prevent the heat from escaping. In more authentic places such as oden bars and ryōtei in Japan, sake is sometimes warmed and served in metal containers known as chirori (ja:ちろり, kanji:銚釐)[1][2][3][4] or tanpo (ja:たんぽ, kanji:湯婆).[5] Recently, glass chirori is also used to chill sake.[6] Formerly, sake was sold by measure in a wooden box measuring cup, known as masu[7] which has a volume of 180 ml (1 gou, 6 fl oz) then was also used as drinkware. In the past, the wooden box was said to complement the traditionally brewed sake, as it is brewed in a wooden cask (ja:樽), but in modern times, the masu is shunned by sake purists because the wood affects the flavor of the sake. Furthermore, tradition requires the masu be filled to the rim as a sign of prosperity. It is now common to make masu as lacquerware or even out of ABS plastic. As the traditional sake-serving cup and a symbol of prosperity due to the same pronunciation as increase/proliferate in Japanese (wiktionary:増す), the masu still has a place in modern times and is still used for the purpose of ceremony or to show generosity. In some Japanese restaurants, the server may put a glass inside the masu (or put the masu inside a saucer) and pour until the sake overflows and spills into the secondary container to create a wealthy atmosphere.

The bride is sipping sake from a sakazuki in san-san-kudo (ja:三三九度) ritual in a Japanese wedding (printed in 1867). A woman in the right is holding a chōshi (ja:銚子) sake server. Nowadays, the sake is typically served in ceramic cups. The cups used for drinking sake are generally small cylindrical vessels called ochoko or choko (ja:猪口, o- is an honorific prefix in Japanese used such as osake and omakase), but may also include flatter shapes such as wide-mouthed bowls. Sakazuki are more ceremonial cups used most commonly at weddings and other special occasions such as tea ceremonies, but larger versions of sakazuki also exist.

While not a traditional serving utensil, a shot glass is also used. In the United States, it is used as a substitute for ochoko, while in Japan it is used in conjunction with masu. Sake stemware is also used, which is essentially a glass sake cup elevated above a wide base. Sake stemware, as well as glass tokkuri, is now commonly used to serve chilled sake.