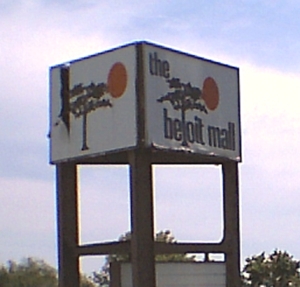 Eclipse Center, formerly known as Beloit Plaza or Beloit Mall, is a mixed-use development and former located in Beloit, . It is undergoing a renovation to become a pivotal point in the city center. Currently it houses the department store , several Rock County services, a newly remodeled convention center/bar, and two School District of Beloit charter schools. Along with those two schools there is an automotive shop and culinary program run by kids from . Plans have been finalized to move the Beloit Public Library to this site.

Set on a high profile, thirty-acre site on a bluff overlooking Riverside Drive (US Highway 51) and the , the convert|400000|sqft|m2|sing=on Beloit Plaza was the first major shopping center in Rock County. Early success was followed by a decline due to competition with the and development in Janesville and Beloit with easy access to . Several redevelopment efforts failed, but with the involvement of Beloit billionaire beginning in 2004, a new plan to make it a mixed-use development with public services and other facilities has raised local hopes for the site.

Current tenants include an store, , the , the Rock County Health Department, the Beloit Area Community Health Center, a convention center/banquet facility, and numerous smaller businesses along with the School District of Beloit.

While the location caused some difficulties placing entry points to the parking lot, Beloit Plaza overcame its shortcomings through a broad array of strong tenants. When it opened in 1966, Beloit Plaza could boast three major department stores and three other anchor-quality tenants:

* (one story, with attached Auto Center)
* (one story)
* (two stories; a branch of an old-line Rockford (IL) department store, owned by )
* (a Wisconsin-based supermarket chain)
* Woolworth (the sixth-largest store in the chain)
*

In addition to its anchors, Beloit Plaza had a variety of primary tenants (including , , Hallmark, and ), two banks on outparcels, a location in the heart of Beloit, and a hub for the city’s bus lines. While the mall's architecture was the basic, Kohl’s did feature a reduced form of the chain’s trademark arch façade (still seen at some existing older Kohl’s Supermarkets).

As the 1960s turned into the 1970s, though, changes in the landscape would eventually doom Beloit Plaza:

* The construction of three miles (5 km) east of Beloit Plaza, which drew away much of the north-south traffic from US 51.
* The construction of enclosed malls in major cities around Beloit, such as Madison and Rockford.
* The 1973 opening of the convert|500000|sqft|m2|sing=on enclosed , located thirteen miles (19 km) from Beloit Plaza in Janesville, the seat of Rock County. It boasted three anchors — JC Penney, Charles V. Weise, and — two of which were also at Beloit Plaza. It enjoyed a prime location on Janesville’s main commercial street, Milton Avenue (US Highway 26), within a mile of I-90 and the busy intersection of US Highways 14 & 26. More than the other, more distant malls, Janesville Mall would seal Beloit Mall’s doom.

Due to the drop in nearby traffic, competition from nearby enclosed malls, and a general contraction of the city’s large industrial base (with resultant loss of jobs), patronage at Beloit Plaza began to fall. Though several of the secondary stores departed, the anchors stood firm.

Beloit Plaza management finally enclosed the shopping center in the early 1980s. The dark and low-ceilinged (16’ ceilings) layout retained the wide common areas of the open-air mall, but added only a few new storefronts. Unfortunately, this would also be the last major remodeling the Beloit Mall would ever receive, until it became the Eclipse Center.

As the area around Beloit Mall declined (due to the loss of jobs), foot traffic at the Mall declined further. Indeed, it became something of a hangout for teens and "the criminal element". Then, on February 2, 1981, robbed the Beloit Plaza Radio Shack at gunpoint, killing the manager and a customer before he left. Beloit Plaza acquired a reputation as an unsafe place, further diverting shoppers away from the Mall.

Changes in the retail environment beyond Beloit also occurred in the 1980s. Following the merger of Bergner’s and Myers that formed P.A. Bergner & Co. in 1982, and the new company’s purchase of the Boston Store chain in 1985, the Charles V. Weise stores were renamed as Bergner's (which was perceived to be a "stronger" name). Shortly thereafter, Beloit Plaza was renamed Beloit Mall to reflect its newly-enclosed status. But more importantly, in Janesville, the intersection of US Highways 14 & 26 (just blocks from the Janesville Mall) became a of "" development, attracting , Target, , , and . Due to the factors noted above, Beloit Mall was seeing little development in its general area. (A section of the Mall’s property was declared a "" due to the presence of foundry sand, further hampering efforts.) Consequently, most of the county’s shopping dollars started traveling from Beloit to Janesville. Still, the Beloit Mall soldiered on.

The 1990s, however, would be less kind to Beloit Mall. In addition to near-stagnant local population growth, a series of defections and business problems would crush the mall:

* 1991: P.A. Bergner & Co. declares bankruptcy.
* 1992: As part of the re-organization of P.A. Bergner & Co., the Bergner’s at Beloit Mall is shuttered. No tenant for the building can be found.
* 1993: Fearing that Beloit Mall would become a "Ghost Mall", the City of Beloit pays $4.5 million to cash-strapped developer Dorchester Corporation of Canada to become part owner of the Mall and keep it open. Technically, the city gets 54% of the Mall (mainly the land, less the "brownfield"), while Dorchester retains 46% (the Mall buildings). The hope was that the money would be repaid in taxes and loan repayments. (It never happened.) The City of Beloit then attracts small-market, mid-priced department store chain to the Mall. Elder-Beerman razes the Weise/Bergner’s building and builds a sprawling new convert|62732|sqft|m2|abbr=on. one-story building; unfortunately, the size of the new building disrupts traffic around the mall. Although the new store draws some shoppers to Beloit (no other mall in Wisconsin had an Elder-Beerman), foot traffic in the mall continues to suffer.
* 1993 - 1994: Kohl’s and Woolworth’s close. The M&I Bank branch closes, and the Girl Scouts lease part of the building.
* 1995: Elder-Beerman declares bankruptcy. The Beloit Mall store, however, remains open.
* 1996: While the anchors of the Janesville Mall (JC Penney, Kohl’s Department Store (which took over the Montgomery Ward lot when Ward’s left), and Boston Store) are doing well, the mall itself is suffering a high rate of vacancies, especially in its JC Penney wing. Meanwhile, the Beloit Sears has become incredibly cramped, with no room to expand. Janesville Mall management approaches Sears and makes them an unbeatable offer: space at Janesville Mall’s main entrance to build a new, larger store; an outparcel for a detached Auto Center; and various financial incentives. Sears officials jump at the chance, and the "move" from Beloit Mall to Janesville Mall is announced.
* 1997: Despite letter writing campaigns and petition drives, Sears closes its Beloit Mall store and opens its new two-story showplace at Janesville Mall. Secondary stores begin leaving Beloit Mall. JC Penney is robbed at gunpoint. Quest Real Estate Partners (headed by local businessman ) buys Dorchester Corporation of Canada’s share of Beloit Mall. Elder-Beerman emerges from bankruptcy.
* 1998: JC Penney closes. The rush to the exit becomes a stampede; even secondary stores become few and far between. A mom-and-pop pager company occupies Fannie May’s large candy counter facing the center court. A trio of developers (including the principals of Quest) buys the city’s share of Beloit Mall for $1.2 million and TIF financing.
* 2000: Walgreen’s and Radio Shack close. Shortly thereafter, the few remaining mall tenants leave, and the Mall (with the exception of the Elder-Beerman store) is sealed. The acquires the branch property.

With the blighted mall largely abandoned (except for the Elder-Beerman anchor and a few parcels with direct-to-outside entrances), a variety of plans were floated for the Beloit Mall parcel. Some of these plans included new commercial and/or residential development; one plan proposed a huge Native American-owned for the property. None of these plans ever came to fruition, however.

Finally, in 2004, Beloit purchased the entire property, with the idea of converting it into a giant municipal center for the city of Beloit. Hendricks has successfully redeveloped a large number of commercial and industrial sites in Beloit and elsewhere. His plan involves converting various sections of the mall complex into a new police station, library, convention center, and . So far, his plan has been met with enthusiasm; the Rock County Board and the Rock County Health Department have already taken up residence in the old mall. The redevelopment plan envisions new commercial and residential properties around the revitalized sections of the mall.

In March 2007, Hendricks Development Group announced that the property would now be known as "Eclipse Center", a name recalling the Eclipse Windmill Company, which was formerly located on part of the property, and long ago merged with . The Center opened a banquet facility capable of seating 1000 in January 2007. Plans have been finalized to relocate the at the Center, and other announced projects are in the works.