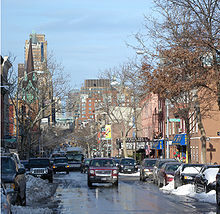 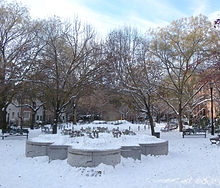 Its historic district, first designated on December 20th, 1969 and extended on June 7th, 1988, is roughly bordered by Atlantic Avenue to the north, Degraw Street to the South, Court Street to the east and Hicks Street (with the Brooklyn-Queens Expressway on the lower level) to the west. Its area measures approximately twenty-two city blocks. With the establishment of the Landmark Preservation Commission in 1965, charming and historically important neighborhoods like Cobble Hill got a chance to be safeguarded from developers, and stabilized property values and economic strength for property owners. According to the Landmark Preservation Commission, the Cobble Hill Historic District is an “unusually fine 19th century residential area” and “retains an aura of the past” (73) with its charming streets and architecture. The Cobble Hill Historic District was listed on the National Register of Historic Places in 1976.[3]

Cobble Hill (or Ponkiesbergh as it was first called) was originally settled during the 1640’s by Dutch farmers. The name “Cobble Hill”, according to various sources,[citation needed] came from the large amount of cobble stones being disposed in the site. The cobble stones were used as ballast on trading ships arriving from Europe, South Brooklyn being a major cargo port. The high elevation point at the corner of present day Atlantic Avenue and Court Street, where the greatest amount of the cobble stones was disposed, was used as a Fort during both the American War of Independence (1775-1783) and the War of 1812 (1812-1814). In 1834, the village of Brooklyn (present-day Brooklyn Heights), become a City and soon included South Brooklyn as well.

Until the establishment of the South Ferry, which connected Atlantic Avenue to Manhattan in 1836, South Brooklyn was mostly rural. After 1836, with the guidelines for street pattern already established in 1834, the area developed rapidly. New streets were being executed progressively, and with the development of new buildings the rural community slowly started changing into a middle-class residential community dominated by row houses, called South Brooklyn. According to the 1840 tax list and street directory, the neighborhood of present Cobble Hill contained 45 houses and 112 residents. According to the Cobble Hill Historic District Designation Report , the architecture during the 1850s, contained Greek Revival, Romanesque Revival, Italianate style, Gothic Revival, Queen Anne style, French Second Empire, and neo-Grec. The area contained a bank, stores with various services and several churches. The population at that time was a mix of Native Americans, Dutch, German, Irish, Italian, Swedes, Norwegian, and English expats from New England. 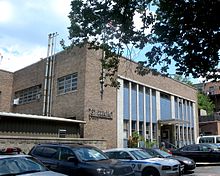 The area is historically Italian and is served by two commercial main streets - Court and Smith Streets. Family-run shops are Cobble Hill's biggest attraction; Italian meat markets (such as Staubitz Meat Market on Court St. and Los Paisanos on Smith St.) and old time barber shops mixing with trendy new restaurants. Smith Street is known as Brooklyn's "Restaurant Row" due to the large number of eateries and watering holes that opened on the street during the late 1990s and early 2000s. With a second blossoming of specialized bars along the corridor in the late 2000's, Smith Street became an upscale weekend nightlife destination.[4] Cobble Hill Park, at the intersection of Congress and Clinton Streets, was reconstructed in 1989 and reflects the brick and stone character of this tree lined neighborhood. Cobble Hill is also renowned for its private Italianate style brownstone and brick row houses. Many of these buildings were remodeled according to regulations dictated by the New York City Landmarks Preservation Commission as the gentrification of the eastern and southern borders of this designated Historic District took hold.

Until the 1970s, Cobble Hill and Carroll Gardens were, together, known as "South Brooklyn", even though they are in the northwest portion of the modern borough, because they were south of Atlantic Street (now Atlantic Avenue), which was the southern boundary of the City of Brooklyn (now Brooklyn Heights and Downtown Brooklyn) during part of the 19th Century. In 1844 the Cobble Hill Tunnel was dug in Atlantic Street so trains could avoid climbing the hill. The neighborhood is served by the Bergen Street subway station on the IND Culver Line (F G trains). This station has an unused lower level that has been used for express service in the past. 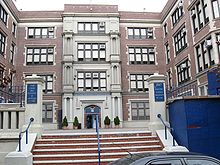 There are three schools in Cobble Hill. Public School 29, also known as the John M. Harrigan School, is located on Henry Street and has one of the best records in the city for extracurricular activities. Also, the building on Baltic Street that formerly housed Intermediate School 293 (which closed in 2005 due to poor performance) now contains two 6-12th grade schools, with the Brooklyn School for Global Studies occupying the top floor, and the School for International Studies on the bottom floor. 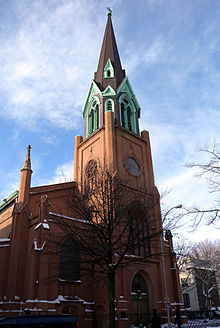 Congregation Baith Israel Anshei Emes is located at 236 Kane Street in Cobble Hill. It is currently the oldest continuously operating synagogue in Brooklyn.[8][9]

St. Paul's church at Court and Congress Streets was designed and built about 1838, allowing the claim that this church is the oldest Catholic church in continuous use in Brooklyn. The steeple was added in the 1860's, and other enlargements were made. The church fronts on Court Street, the chapel and former rectory on Congress Street.